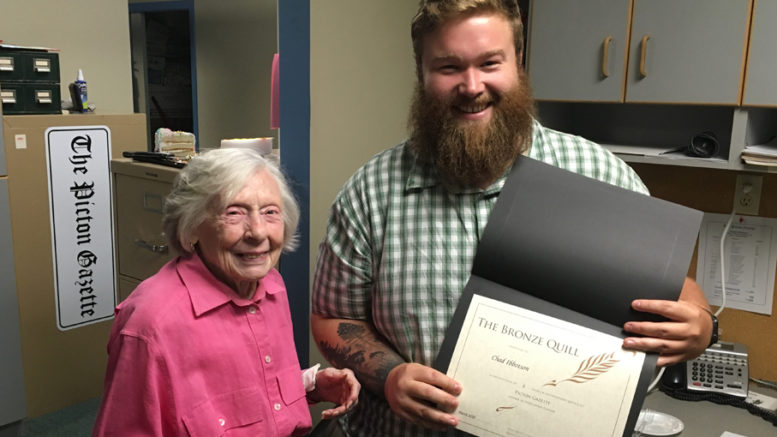 Moving on - Gazette publisher Jean Morrison presents reporter Chad Ibbotson with a Bronze Quill Award from the Ontario Community Newspapers Association in honour of his nine years of service to Prince Edward County readers. Ibbotson is leaving the newspaper to return to school this fall. (Adam Bramburger/Gazette staff)

Starting this week, the Picton Gazette will be without a trusted voice who has dedicated nearly a decade to sharing Prince Edward County stories with readers.

Chad Ibbotson wrote his final set of stories under a staff byline at Canada’s oldest non-daily newspaper in last week’s edition. This fall, he’ll be returning to school to study biotechnology at St. Lawrence College in Kingston.

The Brighton native and Loyalist College journalism program alumni told the Gazette there are several possible career paths he could take upon completion of the program, which offers a possible linkage to Queen’s University and a chance to study abroad in Ireland.

Gazette readers likely recall Ibbotson as this newspaper’s beat reporter for County council, where he earned a reputation for thorough, balanced coverage. Through the lens of his writing, county residents learned about issues like council size reform, impending industrial wind turbines on the south shore, and ongoing issues related to increasing interest in tourism and in development.

“I often heard compliments from readers and even the councillors themselves that Chad took the time to get the story right and present all sides in a comprehensive fashion,” editor Adam Bramburger said. “His work on the council beat has been a credit to himself and to our newspaper and he leaves big shoes to fill.”

Ibbotson also filled the Picton Pirates’ hockey beat during his nine-year tenure with the newspaper, a period that allowed him to cover the Pirates’ 2013 Schmalz Cup provincial championship.

Bramburger said Ibbotson was a dedicated member of the newsroom who could be counted on to deliver clean, interesting copy on a variety of subjects.

“We’ll miss Chad dearly, but we wish him the best in his new career path,” he said.

Ibbotson said he was “proud to have worked for the Picton Gazette” and added the skills he learned while working in Prince Edward County will serve him well.

The Gazette will re-assign its coverage in the near future. At present, reporter Jason Parks, Bramburger, and freelance writer Terry McNamee will fill Ibbotson’s beats.