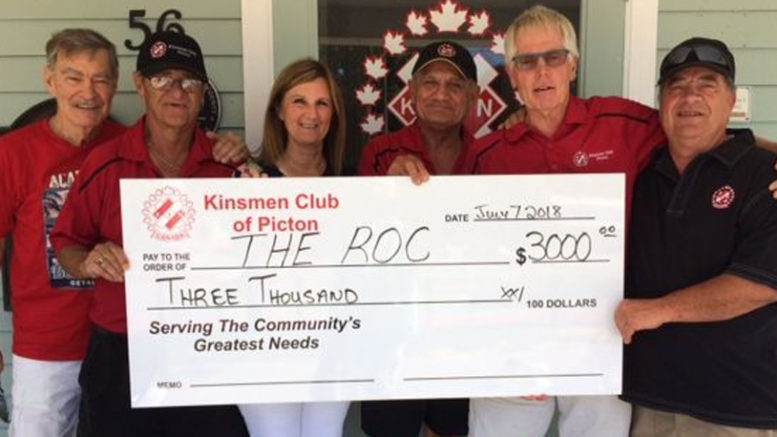 Friends of youth - Members of the Kinsmen Club of Picton present a $3,000 donation to Recreation Outreach Centre executive director Darlene Thompson. The club has supported the local youth centre’s programming to the tune of $15,000 over the past seven years. (Submitted photo) 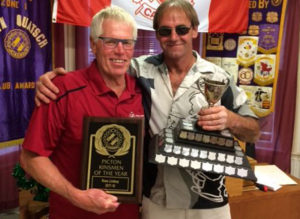 Kudos for Kinsmen – Ross Lindsay, left, was voted Kinsmen of the Year by his peers, including Gary Davidson. (Submitted photo)

The Picton Kinsmen had another successful year in 2017-2018, donating over $35,000 to 30 local charities, youth groups, county-based organizations and families in their times of need.

Among their contributions were $10,000 to the Picton splash pad, $3,000 for the Recreation Outreach Centre (ROC), $3,000 for The Children’s Foundation’s Christmas Angel Tree campaign, $1,500 for Reaching For Rainbows, and $1,000 each to the Royal Canadian Air Cadets 851 Prince Edward Squadron, Gilead Fellowship Christmas dinner, Cystic Fibrosis, and the Regent Theatre.

“We do all this with 21 members through TV bingos, our loonie auction, the annual golf tournament in June, charity barbecues, and electronics recycling events,” said the club’s vice-president Terry Miller.

The club meets every second and fourth Wednesday at Benson Hall for a dinner meeting. Its members also have fun special events and social gatherings throughout the year.

Looking ahead to 2019, the Picton Kinsmen will see the club’s 75th anniversary. One program that has stood the test of time is the bingo program. When members volunteer on Thursday nights this year, they’ll continue a tradition that has lasted since the 1940s.

Each year, the Kinsmen celebrate their service and fellowship with a summer barbecue. There, the members vote on a Kinsmen of the Year who best exemplifies what it means to be in the club. This year, past president Ross Lindsay won for the third time in six years. Two-time recipient Gary Davidson presented him a trophy and plaque.

At this year’s barbecue, the club handed out its $3,000 donation to the ROC, bringing its cumulative total over a seven-year period to $15,000.