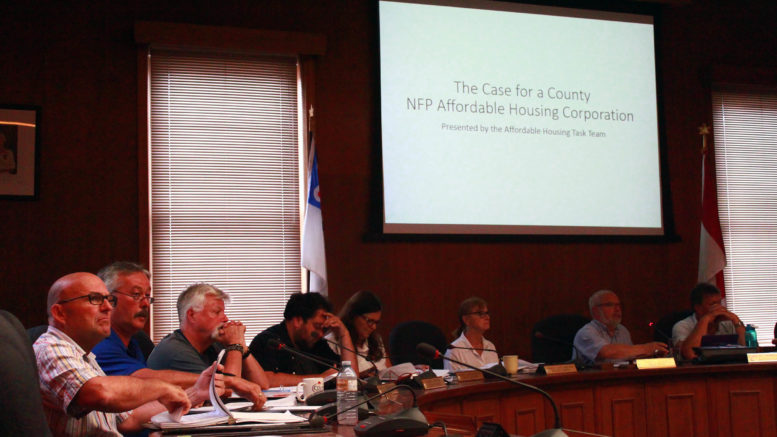 If the tide of mass youth exodus is to be stemmed in Prince Edward County, it’s likely a good bet that a motion from Thursday’s Committee of the whole meeting will be a determining factor.

After hearing from several local stakeholders that spanned the spectrum of attainable housing seekers and concerned community organizers, committee members voted in favour of creating The Prince Edward County Housing Corporation, a not-for-profit, attainable housing corporation operating at arm’s length from the municipality.

In essence, a County-initiated independent body with the mandate of supporting, sourcing and securing attainable housing in Prince Edward County.

The group would be governed by a nine-person board  (the compliment will include two councillors) that will be gauged through a core competencies and skills matrix and eventually appointed by the incoming council prior to Jan. 31, 2019.

The move to create this body comes as a local crisis has developed due to the lack of availability and affordability of housing in Prince Edward County.

One doesn’t need to venture too far in this municipality to speak with families that have been impacted and effectively ‘priced out’ of the local real estate market-either through the rental or the purchase approach to housing in recent years.

In the report supporting the creation of the corporation, director of community development and strategic initiatives Neil Carbone spoke of the effects of the lake of affordable housing had on Prince Edward County’s local economy, social fabric and the implications for long-term community sustainability.

The case for such a body to help keep young families and aging seniors in a roiling Prince Edward County real estate market as a definite feel.

Low enrolment in schools and youth programs and sports is a telltale sign.

But the Affordable Housing Task Team looked at hard numbers and the determination was easily made.

According to the Canada Mortgage and Housing Company (CMHC), housing is considered to be affordable when a household spends less than 30 per cent of its pre-tax income on adequate shelter and in Prince Edward County, approximately 27 per cent of current households are at our above this threshold.

According to growth studies, the county will grow by 1,653 households over the next two decades and, based on current household incomes and average market rents (and without considering the trend of housing price increases moving faster than incomes) 462 of those future units would need to meet the affordability criteria.

Essentially, 24 affordable units per year for the next 20 years need to be erected and that doesn’t begin to address the 3,810 households that are currently spending over the 30 per cent CMHC threshold.

Councillor Bill Roberts wasn’t mincing words when he called the motion “The most important this council will have passed in its four year term” and asked Carbone if the 24 units per year that would address the growing number of households.

Carbone warned that this number of two dozen units per annum wasn’t as much as a target for the corporation as it was an indication of the severity of the issue.

“I would argue this target is actually low and it wasn’t put there for us to hit, it was put there to try and put some numbers to the severity of the issue we’re facing,” Carbone said “If we don’t do something, if we don’t develop a framework to address affordable housing, the issue is going to get much worse.”

Picton councillor Treat Hull said an action such as this was long overdue and the fact it’s taken council this long into its term after identifying affordable housing as a key pillar in its corporate strategic plan in 2016 as evidence of a need for an independent body to help the cause along.

“This housing corporation will be the fundraising conduit and it hopes to open new sources of funding that wouldn’t give money to the municipality and that’s one of the most critical points. If we can use it to leverage new money from outside of the county, it will be be a huge success,” Hull said.

In making an amendment to the original motion as it stood before committee Thursday, Councillor Steve Ferguson pointed to some statistics surrounding the short-term rental market in Prince Edward County and how it compared to other tourist regions.

Further, Ferguson said 856 or 83 per cent of those spaces in Prince Edward County were entire home rentals and that comprised of about six and half per cent of the entire housing stock in the municipality.

Accumulative short term rental growth rates locally were figured at 92 per cent annually, according to details offered by the councillor from Athol.

“Short term rentals aren’t the entire culprit of our housing criss but they certainly are a contributor,” Ferguson said.

Council is expected to find out more about the local short term rental issue at a special Committee of the whole meeting scheduled for Monday evening at the Highline Hall in Wellington where a special presentation and a review of draft recommendations regarding short term accommodation regulations is expected to take place.

In terms of dollars committed to the corporation, the motion called for the allocation of $10,000 from its 2018 funds for Affordable Housing for the creation of by-laws for The Prince Edward County Housing Corporation, following appointment of the full Board and subject to its election of statutory officers and that the uncommitted balance of funding earmarked for Affordable Housing within the 2018 budget be placed in reserve and transferred to The Prince Edward County Housing Corporation as seed funding following adoption of its by-laws.

Councillors Hull, Gord Fox and Roy Pennell were voted as stand-in appointees until such time the incoming council appoints the full board compliment.

To be approved by council, the motion will still need to be passed at the Sept. 11 council meeting.