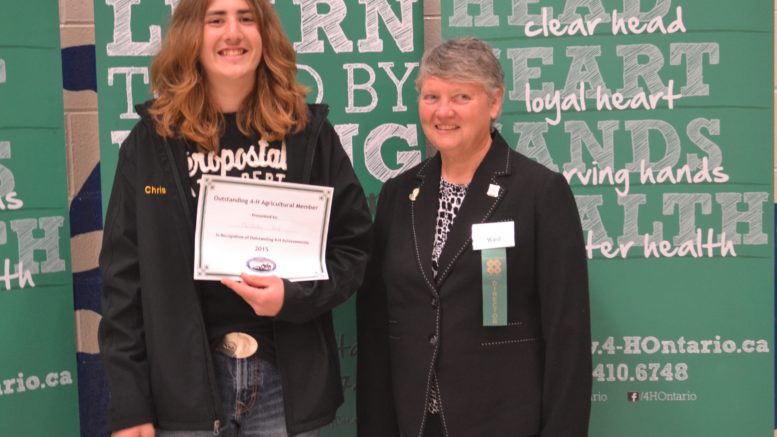 OUTSTANDING IN HER FIELD- (Right) Lynn Ward presents an award to Chris Bell at the 2015 Prince Edward County 4H awards. Ward has been selected to join the honourees at Farmtown Park's Quinte Agricultural Wall of Fame next weekend. (Jason Parks/Gazette file photo)

A member of the Prince Edward County agriculture family is taking their rightful place in Farmtown next weekend.

Gilead Rd. Farm leader Lynn Ward is among the 2018 Quinte Agricultural Wall of Fame induction class and one of three entries that will be feted at Stirling’s Farmtown Park Sept. 16.

Ward’s entry was sponsored by the Prince Edward County Federation of Agriculture.

Nominator and Gilead Rd. Neighbour Dennis Dick called Ward “The consummate volunteer, both within and outside of agriculture.”

Ward has been leader of over 130 local 4-H Clubs, has served for over 30 years on the Prince Edward 4-H Association Board and for over 20 years on the Regional Board and is in her second term on the 4-H Ontario Board of Directors.

In 2011, Ward won the Ontario 4-H Arbor Award which is the most distinguished award given to volunteers who have a positive impact on 4-H in Ontario.

Ward also serves on the board of the Prince Edward Agricultural Society and is a member of their Agricultural Awareness Committee.

Ward is a member of the Board of Directors of Prince Edward Federation of Agriculture.

She is an active member of the Wellington and District Lions Club and was recently presented the Prince Edward Lions Club Volunteer of the Year Award.

Ward is also an active member of Wellington United Church and serves on several committees as well as being a dedicated Sunday school teacher.

All this while working as a Registered Nurse for 42 years, raising her daughters and participating on the family farm with husband, Don, and brother-in-law, Elmer Ward.

“Lynn has contributed greatly to agriculture and to her community,” Dick added.

Ward will be joined by Patricia Johnston and the late Carl Wilce, farmers and leaders that operated a beef farm in Cramahe Township.