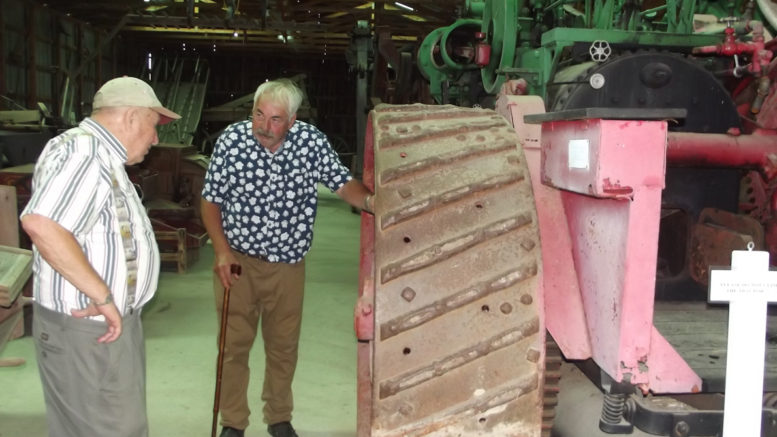 Enduring reminder - This massive Case 30-horsepower steam tractor brought back memories for Bill Rose (left) of Bloomfield and Roy Pennell of Ameliasburgh as they attended the 50th anniversary event at Ameliasburgh Heritage Village on Sunday, Sept. 2. (Terry McNamee/For The Gazette)

It’s been 50 years since the founding of what would become Ameliasburgh’s very own Heritage Village, and the place was hopping as the anniversary was celebrated on Sunday with music, cake, games and more.

Curator Janet Hubbs was delighted with the turnout, noting that about 80 people had already shown up halfway through the day’s events.

“There are all kinds of families here,” she said. 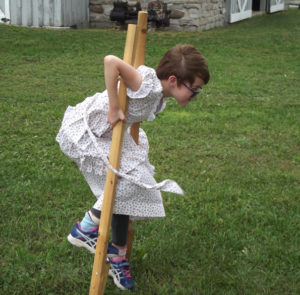 Steady as she goes -Seven-year-old Emily Rayls of Kingston had fun trying to walk on stilts during the 50th anniversary celebration at Ameliasburgh Heritage Village on Sunday. (Terry McNamee/For The Gazette)

Many of the visitors were residents of tiny Ameliasburgh itself who wanted to be a part of this momentous occasion. Some had been coming since they were children, and some families included three generations. Other visitors came from as far away as Toronto and Ottawa. Little knots of retired farmers could be spotted here and there discussing the merits of various farming equipment such as the big, steam-powered Case tractor on display in one of the buildings.

Hubbs said today’s heritage village began as a small museum in 1968. The first building on the site was a Wesleyan Methodist Church built in 1868. It became a United Church in 1925 and served the community until 1967. After the museum opened, the site just kept on growing, and it now has about a dozen buildings and an impressive collection of pioneer items and agricultural equipment. The buildings include a two-storey log cabin, several barns with displays of agricultural equipment, a functional blacksmith shop, a carpenter’s shop, a general store, a tea room, and more. A highlight is the large stone building housing a huge steam engine with a Goldie Corliss 18-foot flywheel.

People visiting on Sunday enjoyed live music, watching small steam engines in action and trying out “old time” amusements such as walking on stilts and playing ring toss, crokinole and croquet. Joanne Killick-Hill was busy at an old-fashioned stove creating traditional foods such as sweet-tasting oak cakes, which were ready for tasting fresh out of her cast-iron skillet.