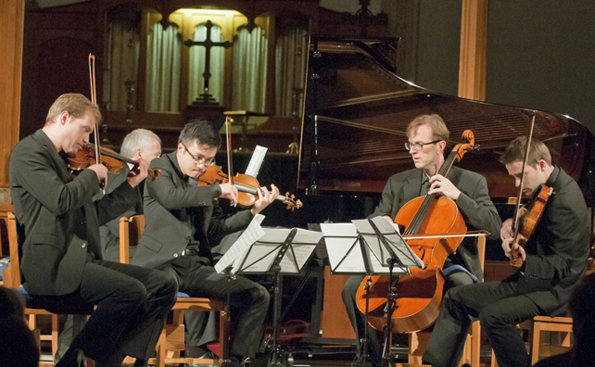 For opening night of the festival’s 15th year, the world renowned New Orford String Quarter will be in the spotlight after replacing the only artistic director the festival has ever known in Stéphane Lemelin.

To mark the occasion, violinists Jonathan Crow and Andrew Wan, viola player Eric Nowlin, and cellist Brian Manker will be playing the debut performance of Canadian composer John Burge’s Death of a Lady’s Man. The piece is Burge’s homage to Leonard Cohen.

A second concert, Saturday, will see Studio de musique ancienne de Montreal offering a programme of renaissance and 20th Century choral works. To close the first weekend in a Sunday matinee, internationally acclaimed pianist Andre Laplante will perform selected works by Mozart, Schubert, Ravel, and Liszt in a concert festival organizers have billed as a rare opportunity to see a prominent Canadian virtuoso outside the world’s greatest concert halls.

The second weekend of performances Sept. 14-16 continues with the New Orford String Quaret bringing more of their leading friends from the world of Canadian chamber music.

Violinist Mark Fewer will headline the last two concerts of the festival, but they will take on different themes related to the guests he shares the stage with. On Saturday, he’ll play with jazz performers Joseph Phillips on bass and David Braid on piano. Then, Sunday afternoon, appropriately, Fewer will be playing chamber music with Nowlin on viola, Benedicte Lauziere on violin, Joseph Johnson on cello, and Wonny Song on piano.

The Friday and Saturday evening performances start at 7:30 p.m. while the Sunday afternoon matinees are at 2.

Tickets are $35 per adult, $15 per student, and $5 for youth 18 and under. Patrons may also purchase a flex pass for six total admissions for any combination of numbers of people and concerts for $180.

To purchase tickets in person, visit Books & Company (for cash and cheque sales only), the Merrill Inn, Jackson Falls Inn, or Sam the Record Man in Belleville’s Quinte Mall. Reserve by phone at 613-399-5429,