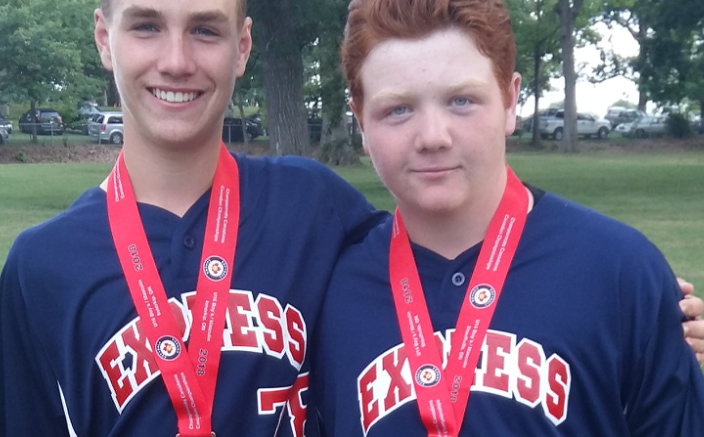 CATCH THE EXPRESS- County natives (From Left) Nic McGrayne and Aiden Reddick were medalists at the U16 and U14 Canadian Softball Championships last month. (Submitted Photo)

For proof, one doesn’t need to look much farther than the lineups of the U14 and the U 16 Napanee Express to see some ‘County Power’ in the lineup of both starry squads.

Aiden Reddick and Nick McGrayne might have been separated by age divisions this season, but that didn’t stop them from being clutch players for both teams.

The U14 Express featured Reddick at the heart of the lineup and the club went all the way to the final game of the Canadian Championships in Stoufville last month.

Playing most of the time in centrefield, Reddick hit a sizzling .545 and didn’t commit an error in the entire tournament as he was named to the all-tournament team.

“He plays mostly centrefield but he can come in and play third base when our regular third baseman goes into pitch,” Thompson said. “He hits for both power and average, he has great speed and a great arm. You can put Aiden Reddick anywhere on the diamond and he’s going to give you great defence.”

And versatility is only half his game.

For most of the season, Thompson batted Reddick in the three hole but moved him to clean up at the Canadian championships.

“He was the top hitter for us in three of four tournaments this season,” Thompson added. “He always came up in big spots and produced.”

Napanee managed to upset the top ranked Simcoe Braves in the preliminary round at the Canadians that secured a spot in the finals.

Unfortunately, the tournament didn’t have a double knockout and the Braves clipped the Express 7-2 in the winner-take-all final game.

With a standout season in the books, Reddick will move up to the U16 level next year.

“He’s an outstanding competitor and he has the will to win in him, he’ll do anything to get better and over the last three seasons, he’s become a leader and been clutch in big moments, producing when the team needs it the most,” Thompson added.

Up in the U16 ranks, the Express turned in a bronze medal winning performance at the Canadians last month which were hosted in Innerkip, ON.

Express bench boss Corey Brooks said the club was departure from most Express teams of the past and present where a core has played together since they’ve been able to swing a bat and grip a softball.

Players that had only played house league and affiliates were part of a mixed bag of recruits heading into the 2018 season.

Brooks said the story of the U16 2018 Napanee Express was a little like the Bad News Bears in that the team had to practice a lot in order to compete and play with the best in Canada.

Part of the storyline that wound up being a Cinderella-type tale was McGrayne who spent his first season behind the dish.

“We didn’t have a catcher coming into the season and I looked at Nick as an athlete that plays goal in hockey and figuring he might have the skills and the will to get behind the plate every game,” Brooks said.

Strapping on the tools of ignorance, McGrayne learned the position and started to become a leader in the way most catchers are, becoming a defacto field general for the manager in nursing pitchers and calling pitches.

“He really became an integral cornerstone of our team,” Brooks said.

The coach also heaped high praise in the direction of Reddick who was called up to play for the U16 squad at the Canadian Elimination tournament where Napanee finished fourth overall.

“We would not have qualified if we didn’t have him in our lineup at Eliminations,” Brooks added. “It was such a big year for us and both those kids played huge roles.”