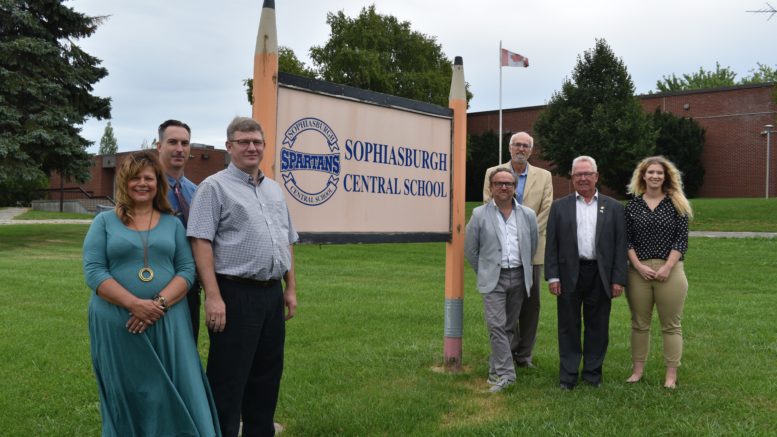 There was a decidedly different vibe on the front steps of Sophiasburgh Central School on Thursday morning than there have been at other community elementary schools when administration and trustees of the Hastings and Prince Edward District School Board have gathered in past years.

For some, school closing ceremonies have a certain sense of a wake that commemorate better and livelier times for the elementary learning installations about to be shuttered and a wonder of what was to come.

And Sophiasburgh Central School seemed destined to have one of those pre-planned get togethers where alumnus and parents would gather, talk about old days, mournfully remark about the passage of time, tradition and heritage and wonder what will happen to the community that was so identified with the elementary school. 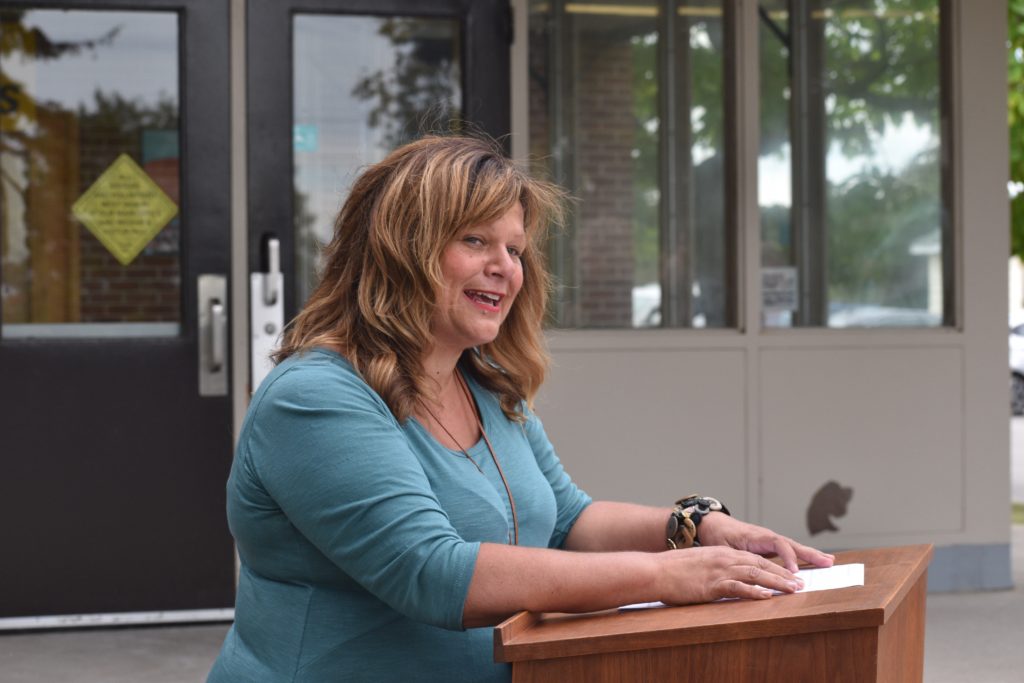 But Thursday’s ceremony wasn’t a funeral march as much as it was an announcement of rebirth.

Board staff, parent council members, trustees, local municipal officials and councillors and members of the Prince Edward County Food Hub gathered to formally announce the striking of a five-year partnership that will see surplus space in the school transformed into a community commercial kitchen to be utilized by food producers, restauranteurs, entrepreneurs and the like.

While the details the agreement between the PECFH and the board have been declassified for a week or so and were detailed in last week’s Gazette, Thursday’s celebration was the first time the parties haven’t been separated by the board table and both sides could take joy in a communal pact and speak to what was to come in the near future.

The school literally has a new lease on life after trustees decided to grant Food Hub organizers an opportunity to raise capital and meet a host of other requirements- stipulations that were accomplished late last month.

On Thursday, the talk of school consolidation and closure seemed nothing but a distant memory and a nothing more than a drastic-but-necessary catalyst for community activism, engagement and change.

Board chair Lucille Kyle said that Sophiasburgh reminded her a lot of where she lived in a village called Detlor, Ont. near Bancroft.

Like Demorestville, the village used to have a lot of amenities in years past but had fallen to the ravages of the march of modern capitalism and declining rural population.

Kyle added that she and her fellow trustees were optimistic and excited to see the partnership work and the Hub project come together. 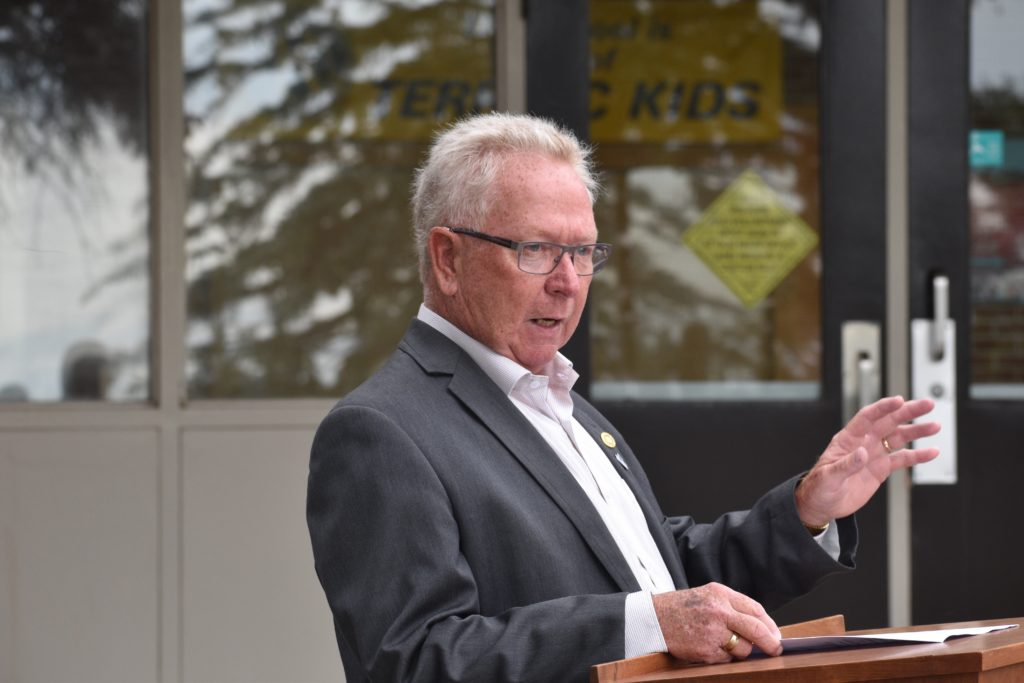 Prince Edward County Mayor Robert Quaiff was involved in the entire process from a number of different angles.

Quaiff admitted to trying the tough talk at some of the early Accommodation Review Committee meetings before deciding that a collaborative approach was the best track to keeping the doors of Sophiasburgh Central School open.

Quaiff called out the community development office — namely Neil Carbone and Todd Davis— as instrumental in supporting the hub organizers and serving as a go between mechanism with the Provincial ministries.

“Todd, you worked day in and day out to save this school,” Quaiff said.

But perhaps the most poignant comments Thursday were delivered by PECFH president Mike Farrell and co-organizer Todd Foster.

Farrell perhaps encapsulated the entire feeling of a progressive Prince Edward County vibe in his comments when he spoke of the cultural alchemy that’s developed locally.

A mix of new people and the heritage families and long-serving people of Prince Edward County made the dream of the Food Hub be realized. 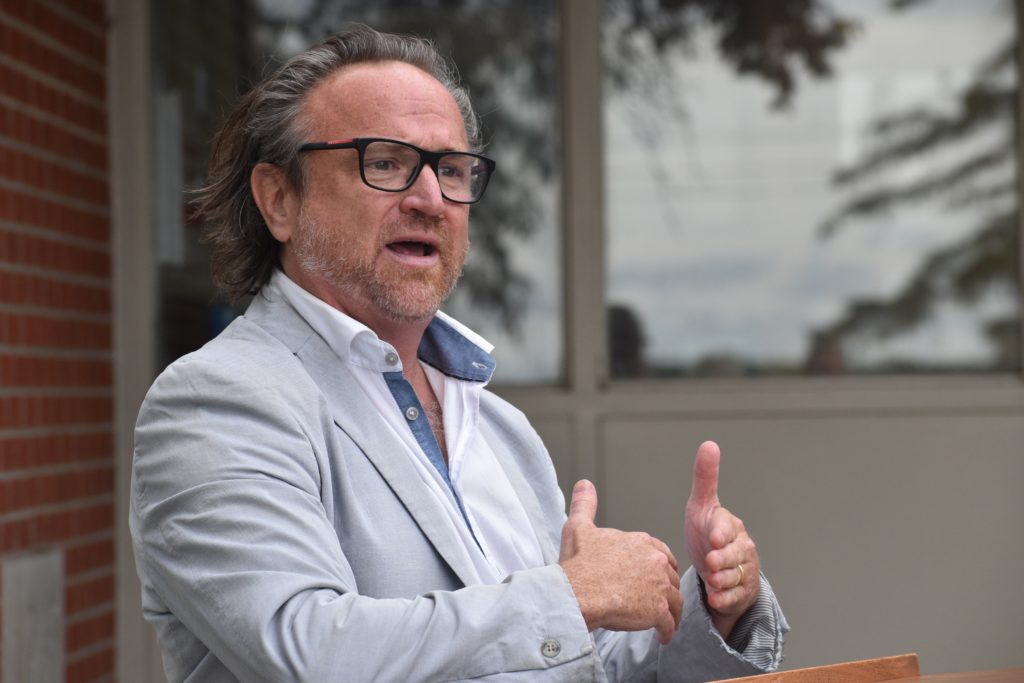 “I look around here today. People that are semi -newcomers, really new comers and heritage people and that really represents people through the county and Bay of Quinte that have supported this project. Sometimes there’s friction between these groups but that’s good and it moves the pendulum forward.

Farrell said the process started as an attempt to save the school but transformed into something more monumental in a global sense.

Community engagement that ties groups together in many ways and builds bonds amongst new and old.

“This project is a symbol of what good things can happen when we all pull together towards a goal that’s innovative and practical,” Farrell said.

He added that new ideas and old ideas can work together to have a positive outcome and that was evident in himself and his friend Todd Foster.

Foster called Thursday’s announcement a great moment in the history of Sophiasburgh, the County of Prince Edward and the Province of Ontario and the country as a whole.

There was some nervous hand wringing in the ward when the HPEDSB announced which schools would be involved in the ARC process and Foster knew that Farrell had to be involved in any Sophiasburgh project.

“I knew Mike was wired for about 600 volts so we got him on the committee and the rest is history,” Foster said with a laugh.

Foster even acknowledged this corner describing the pair as the county’s answer to The Odd Couple but said it was quite alright in that it took diversity to make the dream come true.

“That diversity is what led us to success in the end,” Foster said. 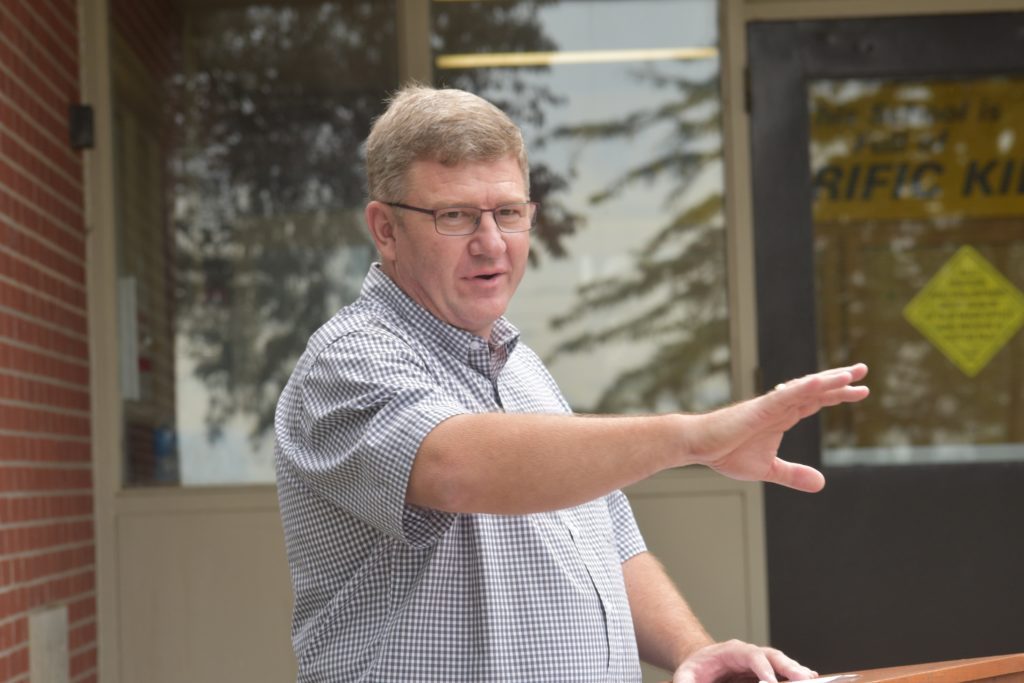 Foster echoed Farrell’s comments that thanked the board administration and trustees for partnering with the organizing committee.

“Thank you for believing in us and seeing what we saw in this project and giving us the opportunity to make it happen,”

Foster also thanked  Quaiff for his unending support of the project.

“I did not know you personally before this process but your passion in the entire process was evident and we are going to be losing a good leader this fall,” Foster added.

In closing, Foster mentioned the well used phrase “It takes a village…”and harkened back to the days of old.

“This school has a long history of the community being a very big part of it. It wasn’t just a school, place you came back to for Cubs, Guides, ball leagues, summer camps, 4-H meetings. This school wasn’t just a school but it was part of the community,” Foster said. “When this community hub concept cams up, it was very easy for me and others to grasp because it wasn’t new in Sophiasburgh, it’s just something that was old that’s been made new again.”
Foster pointed to the 78 per cent of the funds raised for the Food Hub project being raised locally as evidence that people in the community were inspired by the group’s goal.

And perhaps that local goal becomes the standard in modern education that rural educational facilities have a purpose to serve beyond the Ontario curriculum.

“Hopefully today marks the beginning of communities putting the word village back into the phrase it takes a village to raise a child,” Foster said.