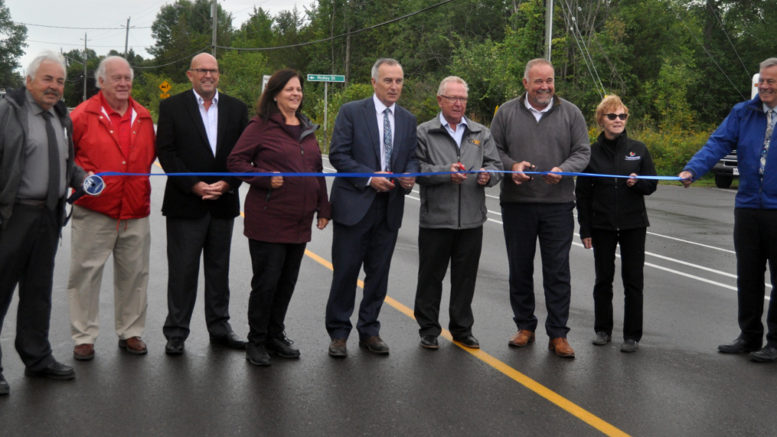 The shoreline road running from Carrying Place to Rossmore may have been numbered County Rd. 3 for decades, but that designation could have easily been introduced this week to symbolize a successful partnership.

That morning, representatives from the municipal, provincial, and federal governments stopped to celebrate the way each of the three levels came forward with just over $3 million to fund reconstruction work starting in 2016 — though the work completed in 2016 and 2017 actually came in under the $9,361,920 eligible project cost.

As flagmen signalled a last and, for once, welcomed closure on a 5.6-km stretch between County Rd. 28 in the east and County Rd. 23 to the west, Mayor Robert Quaiff was enthusiastic about the completion of pavement rehabilitation and widening, new storm sewers and drainage improvements, and added bicycle lanes. He said without partnership from upper levels of government the project would be much smaller, if it took place at all. 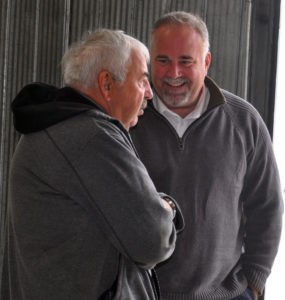 He appreciated the work of project manager Joe Angelo and commissioner of engineering, development, and works Robert McAuley for their stewardship of the project dating back to 2013, when preliminary drawings were completed. They regularly updated councillors through meetings at the Rossmore Station No. 5 firehouse.

He also credited contractor Coco Paving Ltd. for its role in completing the work.

“I have to say the contractor we hired, you guys were spot on. Professional, courteous. We never heard any complaints from residents that lived on the road. Everything was handled in a timely fashion.”

Bay of Quinte MPP Todd Smith has a long memory of residents’ concerns about the condition of the roadway built atop a deteriorating historical base.

“It is great to see this road finally completed. I know it was one of the projects that I was very involved in when I was first elected as MPP for Prince Edward-Hastings. I heard from a lot of residents and there were actually a few big sinkholes that reared their ugly head during those first couple years,” Smith said. “Some of my staff were out stuffing mailboxes in those early years just to raise awareness of the need for rehabilitation along Rednersville Road.”

Smith called the road “a very important piece of infrastructure” for the county where a lot of people are paying good taxes. He said it was gratifying to see all three levels of government pitch together to get it fixed properly to allow people using the stretch to get to work or school daily do so comfortably.

The provincial cabinet minister also acknowledged the County has other roads it wants to fix (Quaiff and other council members have been outspoken about the need for millions of dollars in County Rd. 49 upgrades) and eyed further collaboration as a means to support its needs.

“I know there are a number of other projects in the queue and I hope the three levels of government can continue to work together because, really, in a lot of cases that’s the only way we’re going to be able to tackle these projects.”

MP Neil Ellis, a former Belleville mayor, also stressed the importance of partnership. He said he strongly believes councils and mayors know what is best for their municipalities and said he was pleased to see his federal government approve the expenditure to help the project the municipality identified. Ellis said he’d read about the problems with County Rd. 3 many times in the media and acknowledged others also need work. He, too, stressed the importance fo partnerships for major projects.

“It’s great when all three levels of government work together,” Ellis said.

Ameliasburgh councillors Roy Pennell and Janice Maynard each expressed their thanks to the three partners for committing to finish the work on behalf of their constituents.

“It’s nice to see it done,” Maynard said, adding she received a number of phone calls advocating for the project.

The project was completed as part of the Building Canada Fund — Small Communities Fund, which was introduced by the federal government in 2013. It reached a partnership agreement with the Province in November 2014.