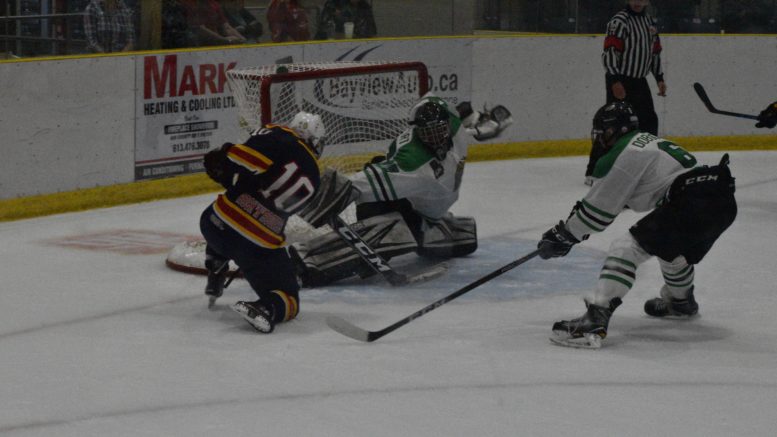 It was just like old times at the Lehigh Arena this weekend-with, of course, the obvious exception of the new name on the front of the rink.

The Wellington Dukes picked up a pair of victories to open their 2018-19 Ontario Junior Hockey League campaign on a winning note.

When they needed it, the clutch goal or the key save was there for Wellington and that’s a happy trend for Dukes fans who flocked to the rink this weekend to welcome this edition of the hockey club.

On Friday in the season opener, Wellington needed to come back from two goals down in the second period in order to skate away with an overtime victory.

Two days later in a rematch of the 2018 Buckland Cup, the Georgetown Raiders would take a one goal lead with less than ten minutes left only to see Wellington respond with their best stretch of the hockey game, pumping three goals into the visitors net in under six minutes.

Much like their method during last year’s regular season, Wellington didn’t collectively put together their best execution for an entire 60 minute stretch in either game but they had the extra gear when it was called upon. 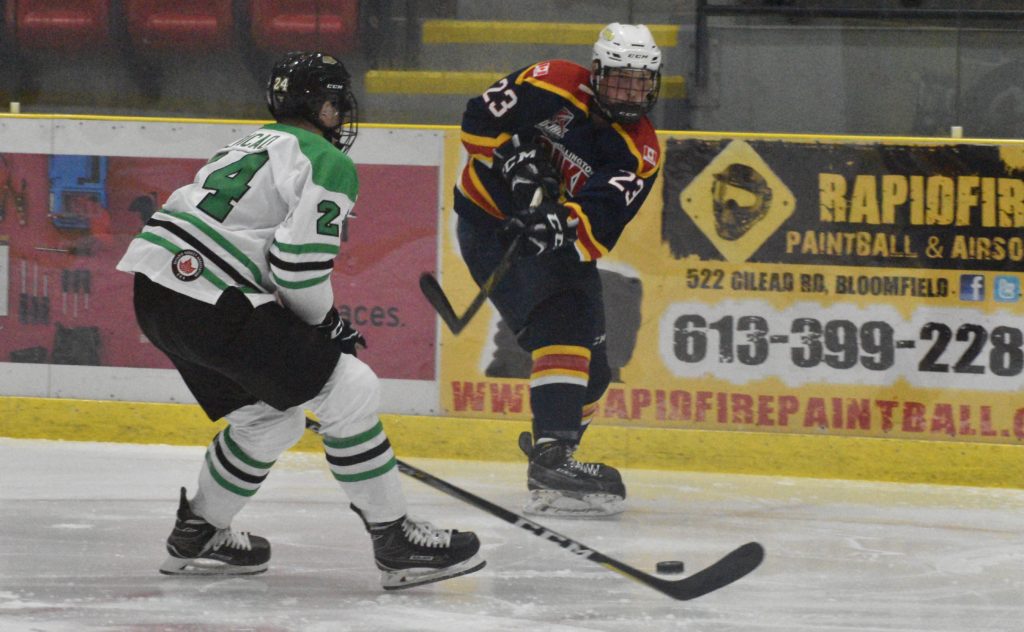 Wellington’s Nelson Powers gets a shot away while being pursued by Cobourg Cougar Marcelo Pericao. (Jason Parks/Gazette Staff)

Wellington bench boss John Druce was happy with the weekend’s results and thought penalties might have cause the momentum to shift numerous times in both games.

The teams combined for 15 minors Friday and 16 minors on Sunday.

“Our goal has to be to stay out of the box and get some flow going,” Druce said.

The coach added that there were likely some opening night nerves on Friday.

“In the first game there were some jitters and that’s to be expected. I thought we rebounded in the second game and put together a pretty good 60 minutes overall on Sunday,” Druce added.

On Friday, Wellington got off to a decent start and scored the game’s first goal when Adam Usinger collected a Ben Addison shot off the pipe behind Cobourg starter Dershahn Stewart and sent it into the half-empty cage at the 9:12 mark.

That lead didn’t last particularly long as Cobourg would strike on a five-on-three man advantage under three minutes later when Ryan Porter made a nice feed to Jamie Engelbert to make it 1-1.

In the second, it was Cobourg getting the jump on Wellington as the Dukes were prone to long stretches in their defensive zone.

Engelbert bagged his second of the game early in the second as Wellington looked befuddled in their end to start the second stanza.

The Dukes would tie it at 4:57 as Daniel Panetta sprung rookie Jacob Vreugdenhill on a two-on-one rush and the Quinte Red Devil grad made no mistake knifing a backhand behind Stewart.

Tied at 2-2, the Dukes looked like a different team through most of the second.

And not in a good way.

A give away at the Cobourg blueline paved the way for Riley McCutcheon to put the visitors ahead under a minute later and then Mack Dobson potted his first of the year about a minute later.

Up 4-2, the Cougars kept clawing but Wellington slowly started to recover. 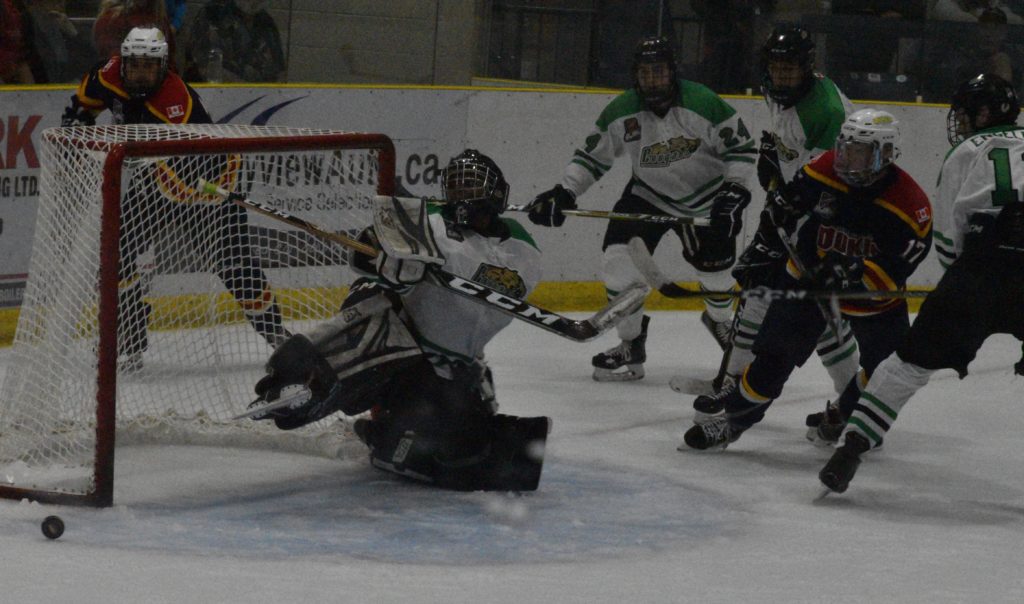 Finally, the Dukes got a much needed two man powerplay towards the end of the second period and sprung to life.

Elijah Gonsalves spotted Ben Woodhouse at the side of the net and the Hamilton native made no mistake, beating Stewart between the wickets at 16:23 to make it 4-3 in favour of the Cougars.

Only one goal was scored in the third period and it was probably the sweetest goal in terms of emotional highs that Madoka Suzuki will ever score.

Jettisoned by the Cougars in the offseason, Suzuki paid instant dividends for the Dukes on opening night when he stole the puck from a Cougar defender and jammed home a shorthanded goal at the 6:37 mark to tie the game at 4-4.

Perhaps no one understood Suzuki’s emotions better than Druce, also a former Cougar.

“He’s been great for us,” Druce said of Suzuki. “He plays well in the structure but he can be creative in the moment as well.”

Wellington would get a couple of powerplays in the first five minute overtime but only the netminding of Stewart would keep the hosts off the board.

With one skater removed for the second five minute session, Wellington controlled much of the play.

A broken sequence at the Wellington blueline proved costly for the Cougars as Andrew Rinaldi was afforded time and space to get up a head of steam and thunder towards Stewart on a partial break.

Closing in on the Cobourg net, Rinaldi picked the corner behind Stewart and sent the hometown faithful happy with his first of the season.

“For him to be effective, he needs to attack with speed and drive with the puck. Andrew is in great shape and I know he’s hungry to be successful,” Druce said of the Montreal native.

Wellington fans got their first glimpse of Gonsalves in regular season action and the pugnacious forward didn’t disappoint in terms of combining skill and sandpaper.

Unfortunately, the Pickering native took a misconduct between the first and second overtimes and was lost for Sunday’s affair with a one game sit down.

Druce was expecting a good test on Sunday as he locked horns with former Dukes coach Scott McCrory who took over from past Raiders skipper Greg Walters this summer.

However, because of a large turnover in the Wellington lineup, Druce figured the emotions weren’t as high as they might have been had Wellington still featured vets such as Colin Doyle, Mitch Martan, Declan Carlile, Jackson Arcan, etc.

“We knew they were coming with a great lineup but we have a lot of guys who weren’t really aware of last year’s playoff history,” Druce said.

For the second time in two games, Wellington opened the scoring as Usinger and Brett Humberstone set up Nick Abbott for his first as a Duke at 1:33 of the second.

The lead was short lived as Derek McVey beat Wellington starter Olivier Lafreniere with a powerplay goal at the 4:35 mark of the middle stanza.

Entering play at 1-1 in the third, both clubs combined for a see-saw frame that thrilled the home town crowd. 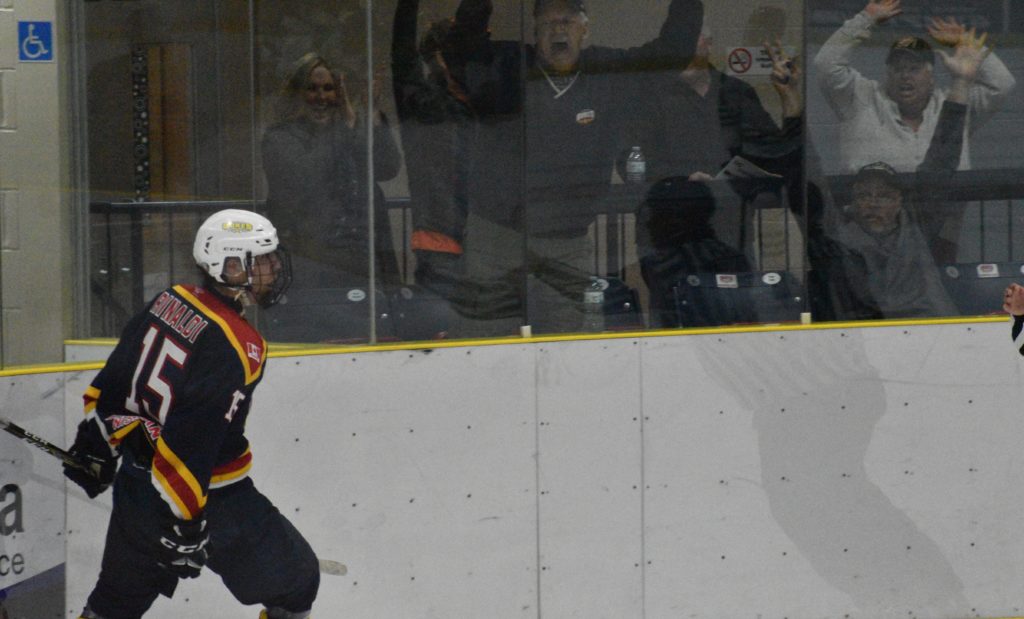 Panetta connected on a Tyson Gilmour feed at 3:46 to push the hosts ahead.

But the lead was erased at 8:52 when Bailey Molella found Josh Nixon for an equalizer.

Nixon counted again a couple of shifts later and gave the Raiders their first lead of the contest with just over nine minutes left.

Wellington rallied and a McVey penalty was the turning of the tide for the Dukes.

Abbott, showing some tremendous skill, set up Gilmour for a powerplay goal at 14:44 to knot it at 3-3.

Keenan Eddy got his first as a Duke in the final minute of the game as he took a Lefreniere feed and sent the puck into a vacated Raiders cage.

“We’re resilient and we play hard. We are determined not to let anything affect us,” Druce added. “From the forwards to Ollie to the defence, we are a team that’s jelled pretty quickly and the guys have worked hard to be ready for this season.”

Wellington will get it’s first taste of the road on Thursday when they head into Stoufville where the Spirit have opened their season with a loss and an overtime setback.

With just four exhibition games and only one of those away from Lehigh, Druce is intrigued to see how his team will perform wearing the road whites.

“The team knows we have to play in all situations so it’s a big game for us to get out there on the road and it’ll be interesting to see what the response.

Leads at Lehigh: The organization turned Friday night’s game into a celebration with a live band playing between periods at the west end of the rink…No banners as of yet to hang in the Lehigh pond to commemorate last season’s triumphs and it’s believed there will be a special ceremony for the hoisting of the Buckland and Dudley Hewitt banners later in fall…After Lefreniere got both starts this weekend, expect Wellington to start Dannick Francoeur in one of the three upcoming games this weekend…Wellington and their fans get their first glimpse of a pair of newly relocated clubs this weekend, taking on the Brantford 99ers on Friday night and hosting the Brampton Admirals on Sunday afternoon. Brantford is the former Milton Icehawks organization while the Admirals played in Orangeville under the Flyers brand last season.