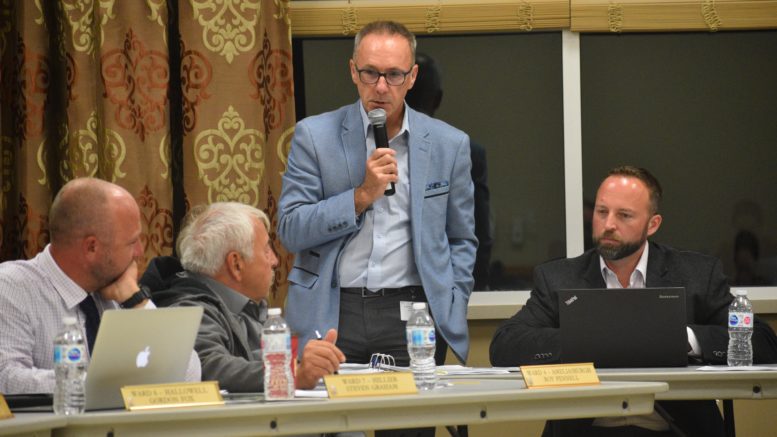 The hard and fast details are still being developed but the municipal rules that could finally govern Prince Edward County’s Short Term Accommodation (STA) market were unveiled to the public Monday night.

Over 200 people turned up at the Highline Hall in Wellington for a special Committee of the whole meeting to hear from the County of Prince Edward’s Manager of Planning Paul Walsh and Greg Bender of the consulting firm WSP Canada present a framework that would regulate the sizzling STA market in Prince Edward County and possibly provide a trickle down effect for people in the community attempting to source attainable housing.

Monday’s report offered a look at proposed draft amendments to the County’s Official Plan and zoning by-laws and, among other items, the amendments introduce a new definition for short-term accommodation and outline where they are permitted.

Based on the questions and comments Council and staff received at Monday’s meeting, planning staff and the consultant will revise the proposed draft regulations before Council formally considers them-likely at the Sept. 27 Committee of the whole meeting.

The crowd was a mixed bag of people positioned along all places of the the STA spectrum. 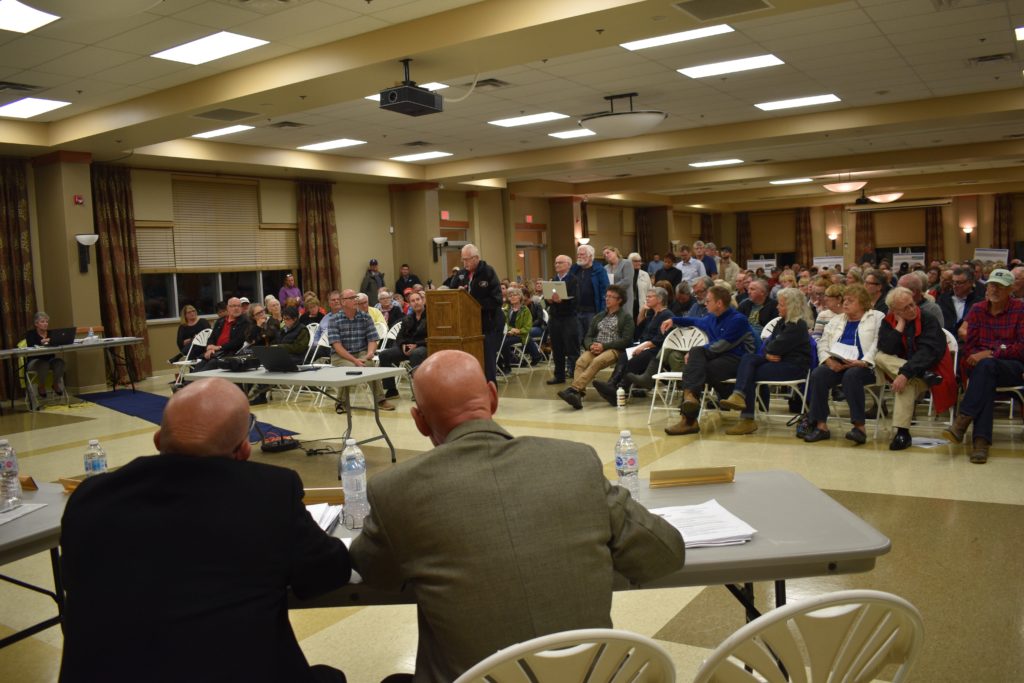 A crowd of over 200 people attended Monday’s special Committee of the whole meeting at Highline Hall in Wellington. Around a dozen people made public comments on a draft Short Term Accommodation amendment and bylaw. (Jason Parks/Gazette Staff)

Concerned Bed and Breakfast and STA owners worried about over-regulation, supporters of any measure to help harness the cost of rent in Prince Edward County and annoyed neighbours who are fed up with weekly visitors disrespecting quiet neighbourhoods turned out in force on Monday and their mass gave credence to the concept the municipality needs to address the issue.

Walsh explained the draft provisions being presented Monday evening were developed in part from a pair of public open houses that took place during the summer as well as over 1,000 completed survey questionnaires.

At the outset, Walsh explained a variety of STAs had been part of the accommodation array of Prince Edward County going back through the years an the host of cottages and rental units have been both a benefit to the local economy and a significant source of income to owners, stating STAs served an important function to the travelling tourist that didn’t want traditional accommodations.

But STAs have issues and the survey indicated that neighbours have concerns with noise, garbage, health and safety matters and that hollowed out communities or ‘dark neighbourhoods’ during the offseason had social and economic impacts.

Furthermore, concerns of the commercialization of residential homes in quiet communities is making difficult for people to afford long term spaces in Prince Edward County and there’s a strong feeling that STA’s have pushed up housing prices.

In providing the broad strokes of the draft amendments, Bender explained WSP examined the best practices in other tourism regions including Niagara-on-the-Lake, Stratford, etc. to see how other municipalities are dealing with STAs and where a defendable precedent might be set.

“It’s extremely important to determine what others are doing but develop something that is unique and appropriate for the county,” Bender added.

Where are the STAs located, are they all the same, what lessons can be learned from others (which is part of a best practices review),  what are the needs of the county and how are those needs different than other regions and how are the needs of neighbourhoods and the economy put into balance are all questions that invoked the genesis of the draft amendment and bylaw process.

The first determination in the draft according to Bender is the owner occupied STAs (bed and breakfast and second units on a property) are different that non-owner occupied STAs and the former will be permitted as before however all STAs will be required to seek a licence.

Non-owner occupied STAs would be restricted to certain zones in an effort to mitigate certain issues and five bedroom or more STAs would be permitted with a site-specific zoning amendment and owners would need permission to operate units of that size.

A licence fee for all STAs will be required under the provision but fees would be based on a number of criteria including defenition, meaning bed and breakfast units and owner occupied STAs would have a lower tiered fee structure.

But, as presented, the fees are not designed to be a cash cow for the County.

“It’s not going to be something that will make money for the municipality, it’s to cover the cost of the (licensing and enforcement) services the County is using,” Bender said.
Requirements in the draft amendment and bylaw include proof of commercial liability insurance, fire prevention measures, emergency vehicle access, maximum occupancy levels, appropriate water and sewer capacities, parking requirements, codes of conduct, etc.

It appears that all existing STAs would be grandfathered into existence under the amendment even if they are not located in a allowed zone or the zone has reached it’s approved STA capacity.

Licenses are not transferrable should the unit/property change hands and existing STAs would have to abide by the bylaw and apply for the annual licence.
Bender said by restricting, zoning and licencing STAs, the intent of the bylaw is to reduce the units in problematic or non-conforming areas gradually. 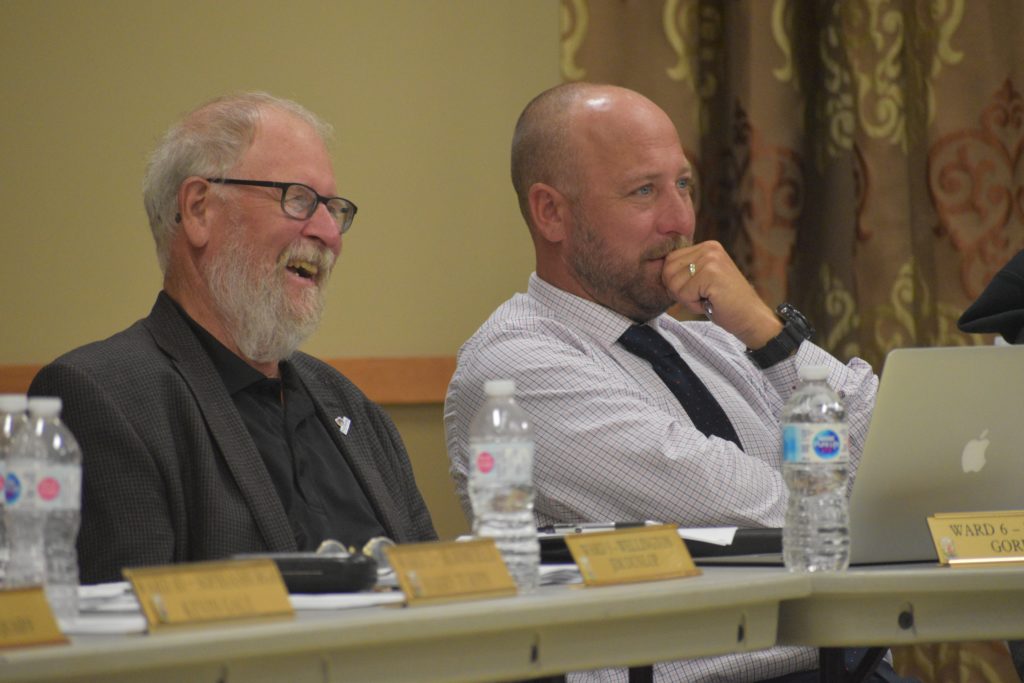 “The intent is to reduce the number STAs in a particular area where there are issues or there might be over saturation over time-it’s not going to happen over night,” Bender added.

Mayor Robert Quaiff referred to an email from representatives of AirBNB sent to councillors and staff Monday afternoon and said there’s was a lot of detailed information contained within.

In Quaiff’s mind, the email added a new potential wrinkle to the process and time would be needed for staff to pore over the data.

“There’s a lot of information for everyone to digest and the timelines we have in place currently my not work,” Quaiff said.

Councillor Fox mentioned an offer made by AirBNB, a carrot of a four per cent surtax on rentals paid by the customer that would go directly to the County’s coffers.

“In my opinion AirBNB are jumping ahead of the gun and offeringa  four per cent which is really quite low because they are really looking after their own interest,” Fox said.  “The more AirBNB’s they can have out there, the more money they are putting in their pocket,” Fox said to applause.

Councillor Steve Graham noted that plan wasn’t presented as revenue generator for the municipality and was adding more red tape to owners while not changing the issue of attainable housing for the community directly.

“So what’s the advantage to this draft amendment?” Graham wondered.

Bender answered that ‘What is the County going to get out of this?’ was a common question at the public sessions in July and he had built potential revenue streams in the bylaw that would have the capacity to repair roads and support affordable housing initiatives if council wished to enact them.

Councillor Bill Roberts said he began at this issue from the premise that in a economically and socially healthy community, the primary role of houses are to be homes and also referenced the communique from AirBNB.

“If ever there was any doubt Prince Edward County was being carefully monitored by AirBNB, it certainly was dispelled in that very long email,” Roberts said.

Referring to the Vital Signs report and other studies on accommodations and housing supply in Prince Edward County, Roberts said if council was going to make a fact and evidence-based decision, the data indicated that the community was in a crisis position.

“We are at a moment of crisis when it comes to attainable and affordable housing and I hope my colleagues are supportive of this report,” Roberts said.

During the public comment session, committee members heard first hand complaints and horror stories from STA neighbours, queries on particular points of the draft and concerns about over regulations and AirBNB’ owners being unfairly targeted

Prior to the start of the meeting, Councillors David Harrison, Lenny Epstein and Dianne O’Brien announced conflicts of interest due to the fact their either operated rental properties or were connected to someone who did.

In O’Brien’s case, she told the crowd her son’s family had a rental property and she was in the process of seeking legal opinion as to what position that would put her in moving forward.

All three left the meeting after the declarations.

The matter will likely be brought to the regular Committee of the whole meeting on Sept. 27 and, if approved, could be passed by Council as early as Oct. 9.