All nine council members attending Thursday’s committee-of-the-whole meeting at Shire Hall voted against a motion originating from the Prince Edward Heritage Advisory Committee (PEHAC) that would have notified 1858637 Ontario Limited of the municipality’s intention to designate the lighthouse built in 1871 as a “property of cultural heritage under Part IV of the Ontario Heritage Act.”

The Salmon Point Lighthouse is one of the last remaining traditional lighthouses in Prince Edward County. It’s unique white rectangular and tapered pyramidal tower is a dramatic departure from the cylindrical for usually associated with lighthouse and is the oldest example of this type of lighthouse construction still standing on the shores of Lake Ontario.

The process of potentially designating the lighthouse, which is located on property owned by a numbered company believed to be connected to the Thomson family, has been ongoing for a number of years.

In July after five years of attempting to formally contact the property owners by letter, Nicholas Karakas, Secretary of 1859637 Ontario Limited, sent a letter to the PEHAC requesting the motion to withdrawn or defeated at the committee level as the lighthouse was in an extreme state of disrepair due to acts of vandalism, dry rot, insect infestation and weathering.

Karakas is a vice-president of Woodbridge Company Limited, which is the controlling shareholder of Thomson Reuters.

On Thursday, nary a councillor could or would support the motion to start the designation process despite the uniqueness of the lighthouse and its place as one of the last remaining examples of this particular construction on Lake Ontario or anywhere else on the Great Lakes. 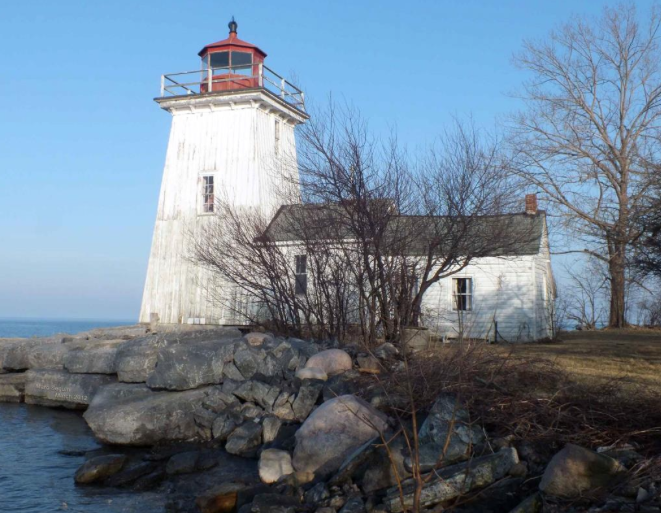 The Salmon Point Lighthouse in 2012. (Marc Seguin/Statement of Heritage Value)

had decided that the municipal government wouldn’t force designations of this matter upon an unwilling land owner.

Forrester recalled the matter of the Young house on County Rd. 11 where the PEHAC were given time to come up with a solution but were unsuccessful with developing a process that would see the home, circa 1873, designated.

“Even if we make the owners list it, (the County) doesn’t have the resources to fix this up so, at this point, we can not force this upon them,” Forrester said.

Councillor Roy Pennell said the idea of passing designation in Ameliasburgh on an unwilling property owner could lead to revolt.

“I think it’s totally wrong and it’s big concern to taxpayers that the municipality could be forcing property owners (to designate),” Pennell said. “I’ve got all kinds of houses in (Ameliasburgh) that are of that age and owners would be fighting in the streets saying ‘It’s our property’.”

Councillor Gord Fox said he struggles with these types of designations and alluded to Karakas’ letter that indicated vandals have caused in excess of $100,000 damage to the building over time.

Fox wondered about what the designation meant for a potential liability to bring the building up to a current standard.

“As I understand it, it’s going to cost hundreds of thousands of dollars to bring it back and I don’t feel comfortable saying to the owners of that building ‘You have to spend that money’ to bring that building up to some sort of standard.

As a member of the PEHAC as well as council, Steve Ferguson noted the Salmon Point Lighthouse and its future was a longstanding issue.

“The important thing to me is that we not make decisions to force people they may object to. In this instance, (Marc Seguin) has the opportunity to make another approach.” Ferguson said. “I think (designating) could bring on the incursion of legal costs and I can’t support the designation,”Forrester said.

Seguin, an authority on Lighthouses of the Great Lakes, submitted a statement of heritage value for the Salmon Point Lighthouse in May for the PEHAC.

It’s unclear where this denial by council leaves the matter of designating and/or protecting the lighthouse on Wicked Point.