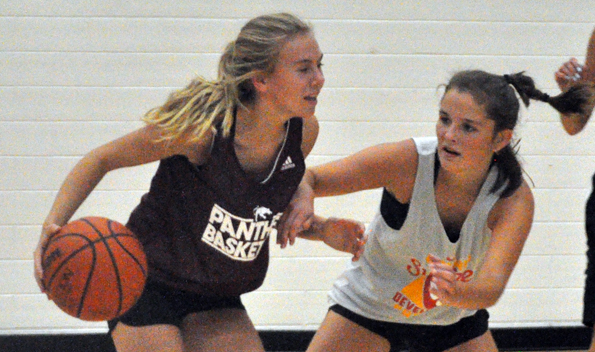 Matching up - Vanessa Wilton carries the ball as teammate Hannah Goad tries to take away space for her to attack during the PECI Junior Basketball Panthers’ practice Monday. (Adam Bramburger/Gazette staff)

The ball may bounce in any direction on Bay of Quinte Conference junior basketball courts this season but the PECI Panthers believe they’re in a position to play with anyone.

Coach Rob Garden expects the amalgamations in Belleville will leave Centennial and Eastside (formerly Moira) stronger with girls from the former Quinte drawing area in their lineups. He knows St. Theresa is perennially strong and schools like Trenton and Centre Hastings can pull in some great athletes. He also knows he’s got an ace up his sleeve — perhaps, a bright orange one.

Though the Panthers don’t have the biggest team, the majority of the 13 players have taken the court together through the County Clippers rep program in the past. That familiarity and the uniformity of skills development will allow them to hit the floor running quicker than most.

The Panthers have a returning leader in Hannah Goad, a fearless guard who led them in scoring many nights in her freshman year. Fellow Grade 10 players Gracie Burris and Emma Brady also put up some points in last year’s postseason and have been relishing the chance to guide their teammates thus far in practices. Garden sees first-year additions like Vanessa Wilton, Lauren Smith, and Emily Stasiw contributing immediately.

That said, the goal is to have all 14 players taking part.

“Gracie, Hannah, and Vanessa have been our most offensive three and I see that happening over the course of the season, but we also have a number of girls I think can contribute themselves,” Garden said. “We can’t have just three scoring. We’ve done that too many times, we can’t recreate that model.”

The form the Panthers expect to create will mimic the senior team with a high-tempo style that requires contribution by committee and looks to mitigate a lack of size in the post. Garden said the juniors will be anything but predictable in their approach, however.

“We’re going to adapt and become a team people don’t like to play against while still developing skills. We’ll get after teams in half-court and in full-court and switch things up. Good teams keep you on your toes. People are not going to be sure what they’re going to get every time they play us.”

The Panthers will have Tally Wilkinson, Hailey Snider, Keshia Hilts, and Mary-Kay Wilton back for a second season this year, while Alisha Bilodeau, Ella Coates, and Keely Kleinsteuber have also earned roster spots.

Goad said she’s been impressed by the way the Panthers have turned out for practice so far.

“Everyone works hard, no one’s really lazy,” she said.

Burris believes positional play will make a difference and it comes from that strong work ethic.

“We have to work on boxing out and rebounding. We don’t have the height we had last year, so we have to work harder to get in there,” she said.

Both veterans said they also like the way the Panthers play together and know one another already. Asked about goals for the season ahead, Goad said she’d like to see the Panthers close the gap on last year’s champions from St. Theresa and look for a shot at a Bay of Quinte championship.

“Our goal is definitely to win games, obviously, and maybe beat our top competitors. I think we have a chance to beat them this year. We were very close in Bay of Quinte last year and I think we can get closer this year. We need to shut down their bigger players, that’s where they get a lot of their points, right by the net.”