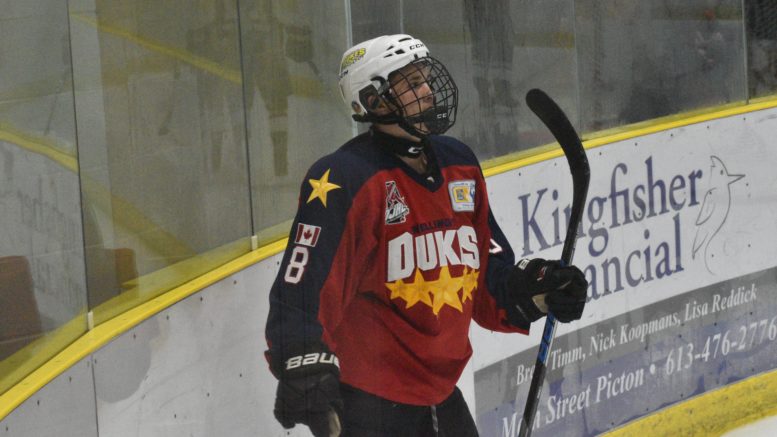 Wellington Duke forward Nick Abbott was the hero in Stoufville Thursday as his goal with one second remaining in the third period was the game winner.

The Wellington Dukes might have looked a little different in Stouffville last night, but it didn’t impact their tendency to be on the winning side of hockey games.

The new-look Dukes, sporting white uniforms that are certainly a departure from their regular Florida Panthers-inspired sweaters that have been commonplace in Wellington for the better part of two decades, got a last second goal off the stick of Nick Abbott to shade the host Spirit 2-1.

And, hyperbole aside, Abbott’s second goal in as many games was literally a last second dagger to the hearts of the Stouffville squad.

Tied at 1-1 and under 15 seconds remaining, Wellington managed to have puck possession to the left corner of Spirit netminder Andrew Albano. Wellington forward Frank Vitucci backhanded a puck at the Stouffville cage only to have it deflect and wind up in the other corner.

Defenceman Brett Humberstone was up on the play and slapped a puck towards Albano, who made an initial stop and the near post with the rebound going skyward above the cross bar.

The puck then landed at Abbott’s feet while the winger was on the goal line to Albano’s right with two seconds left.

In a deft move, Abbott picked a hole over Albano’s pad but underneath the netminder’s blocking glove and the puck tumbled into the Spirit net just a quarter note before the buzzer sounded.

Referee Darryl Dykes was on top of the play and emphatically pointed to the net to signal a goal and the Dukes skated off with a dramatic win.

Despite Wellington outshooting the hosts 32-19 through the opening 40 minutes, the game was tied 0-0 heading into the third.

The Dukes finally got on the board just 23 seconds after the team controlled an offensive zone face-off win.

Duke defenceman Zach Uens took the Ben Woodhouse pass back to the blue line and put it on net.

Albano left a juicy rebound in the slot and Andrew Rinaldi pounced, ripping a wrist shot to the short side and putting his club ahead 1-0.

Wellington nearly managed to get out of the contest with a shutout but an early pull of Albano by Stouffville bench boss Rob Acton hemmed the Dukes in their with two minutes left.

A bad clearing attempt off the boards allowed Jordan Giacomin to send a puck in on Wellington netminder Olivier Lafreniere.

The puck was stopped but an army of Spirit forwards swarmed the net and, eventually, Ryan Smith put a bouncing biscuit into the Wellington basket with 1:35 left.

The game seemed destined for over time but Abbott had other ideas.

Leads at Lehigh:Dukes fans will get a look at the same uniforms tonight and Wellington’s new look appears to come with new secondary logos on the shoulders but retain the main and iconic five star Dukes logo.With the gold striping on the jersey, the white versions look similar to the Las Vegas Knights get-ups if you replace the black with dark navy blue…Although not tested as much as his counterpart, Lafreniere was outstanding for Wellington, stopping 26 shots…Poor pity the visiting clubs this weekend. Brantford apparently can’t play any home games until a protracted fight between the Ontario Hockey Association and the Ontario Junior Hockey League and the Greater Ontario Junior Hockey League is solved.Without dispensing the minutia of details, members of the two junior hockey leagues want the OHA board of governors replaced. The OHA, claiming the relocations of the Brampton (from Orangeville) and Brantford (from Milton) were announced without their approval, are refusing to assign officials to games at the Wayne Gretzky Arena. Brampton, opening on the road with five straight, could be in the same boat as Brantford although nothing has been announced by the OJHL as of yet regarding Admiral home games. When this might be resolved is anyone’s guess but it will likely require lawyers and a courtroom…Speaking of OHA officials, Wellington Duke Adam Usinger picked up his second ten minute misconduct in as many games for a warm up violation…This corner would have paid money to see OHA Board member and staff reaction to the Humboldt-Nipawin game on TSN Wednesday where players were introduced during the pre game without having their chin straps done up and opposing players were talking to one another at the red line in warm up without incurring dozens of misconducts.