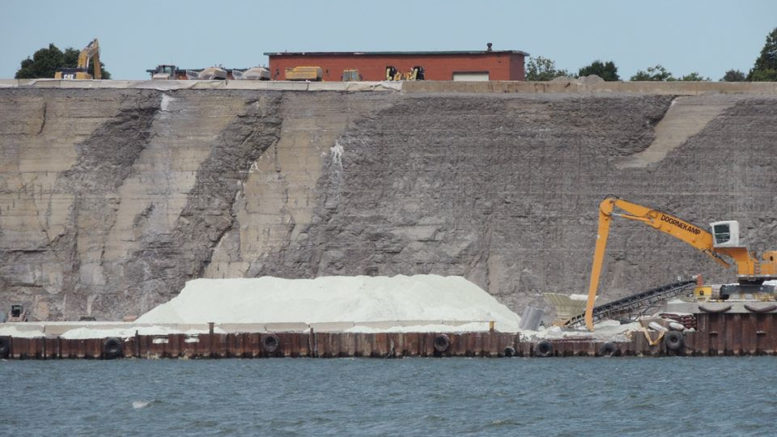 RESIDUAL EFFECTS- A pile of clinker dust at the lower dock area of Picton Terminals earlier this month. (Submitted Photo)

A Picton-area port operation has cleaned up residual clinker dust after a visit from the Ministry of Environment, Conservation and Parks.

The MOECP confirmed to the Gazette late last week that senior environmental officer Shannon Kelly visited Picton Terminals to respond to inquiries made to the ministry by concerned neighbours that residual material from a transhipment of 22,300 metric tonnes of clinker from the Federal Yukon on Sept. 4 was left on the lower dock area.

The material was accepted on behalf of Federal White Cement, a white portland cement manufacturer based in Woodstock, ON.

MOECP spokesperson Lindsay Davidson told the Gazette via e-mail that the majority of the clinker was offloaded and immediately transferred to the lower pit area for storage.

“However, there was some clinker material that was not immediately transferred and remained on the lower dock area, directly adjacent to Picton Bay,” Davidson said.

As a result of Kelly’s visit, the MOECP requested Picton Terminals remove and clean up all the clinker from the lower dock as of Sept. 12.

“In addition, the ministry has requested that Picton Terminals must provide us with detailed measures to prevent any discharge of material to the natural environment prior to offloading any further shipments of any product onto the lower dock area,” Davidson added.

A time lapse video posted to the Picton Terminals facebook page of the CSL Laurention early last showed footage of an excavator methodically scraping materials on the lower dock area and the company confirmed that the operation was part of the MOECP request.

“All clinker was moved from the dock unloading area to the Picton Terminals storage on Sept. 12 and Picton Terminals are in regular communication with MOECP, numerous other agencies and local government,” Owner/operator Ben Doornekamp said in a written statement to the Gazette Monday.