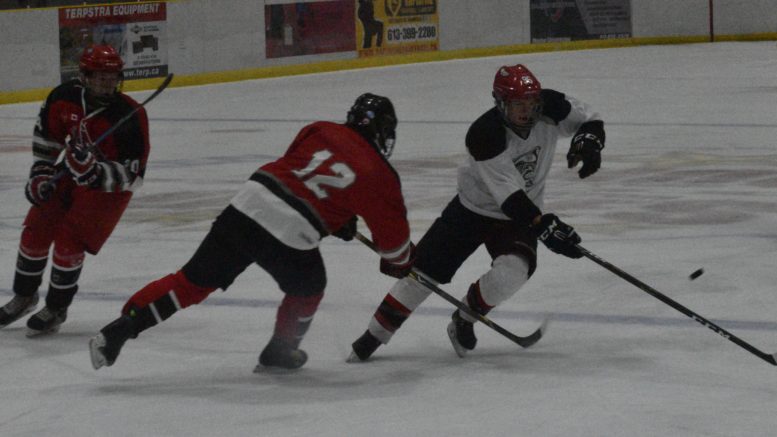 For the better part of two periods Friday night, the Picton Pirates skated with the host Napanee Raiders.

Then, early in the third period, the prohibitive preseason favourite to lead the Provincial Junior Hockey League’s Tod Division in 2018-19 scored their fourth goal of the night to pull ahead of the locals 4-1.

The Raiders started to flex their muscle and, by the end of the period, had scored four more to skate off with an 8-2 win.

For the Pirates, it wasn’t the season opener you would hope for but, if the young Bucs are going to march on in the playoffs season, they need to know where they stand against the best of the division and probably the entire PJHL.

Picton gave a late goal in the first to Devon King but was equal with the Raiders in shots at 13 a piece.

Pirates general manager Chris Masterson said it was a about a five-minute spell to start the period that befuddled Picton but the team rebounded nicely and played most of the back half of the frame in in the Raiders end.

Picton finally broke through on Raiders netminder Nicholas Nabuurs at the 16:05 mark as Landon McLellan and Noah Brant teamed up to feed Matt Poole for his first as a Pirate and made the score 3-1 after forty minutes.

Unfortunately for the visitors, a Cameron Harris goal just 42 seconds into the third set the tone for the frame and the young Pirates were sinking.

“We just to seem to sag after that. The guys let go and it was a parade for Napanee after that,” Masterson said. “It was a disappointing ending but when you consider we have 10 or 11 guys playing their first junior hockey game we feel like there were some positives to take away.”

After Reid Humphrey bagged a pair in the opening five minutes to make it a 6-1 game, Poole took a Devin Morrison feed and connected for his second of the game at 6:14

A pair of Dayton Kent goals finalized the scoring at 8-2.

Picton starter Kyle McNair was left to his own devices for most of the third and was tasked with 47 Raider volleys over the 60 minute contest.

Masterson said Brennan Bush will get the start on Thursday for the locals but the team doesn’t have a plan for its netminders after its second game is completed.

“There’s no real concrete plan moving forward. I can’t say that we are going to alternate and I can’t say there’s a real number one yet. After Thursday’s game, the staff will play it by ear,” the general manager said.

Just two days prior to the opener, the clubs swung a deal on a pair of forwards.

In two season with the Raiders, Conger’s played 72 games in which he’s tallied 28 times and added 37 helpers for 65 points.

In his PJHL rookie season in 2017-18, Matthews got into 28 contests, potting six goals and adding ten assists for 16 points.

Masterson acknowledged the deal was essentially youth for experience and the Pirates couldn’t pass on Conger.

“We had an opportunity to get Griffen here and he’s a veteran that brings experience to our forward lines,” Masterson said. “He’s well liked by the players on our team and we couldn’t pass up this deal.”

The general manager added that it was tough sending a young budding player like Matthews the other way but said it was the going price to pick up the experience Picton was lacking in their lineup.

The Pirates hosts the vastly improved Campbellford Rebels for the home opener Thursday at Huff Estates Arena in Picton.

Somewhat a sad sack team in recent seasons, the Rebels have recruited well this summer and feature a full lineup for the first time in a number of years.

On Sunday, the Rebels led the Amherstview Jets after the first period before succumbing to the hosts 5-2.

“They are not a pushover by any means,” Masterson said. “We should be ready and hungry on Thursday night for what we expect to be a big crowd for out home opener.”