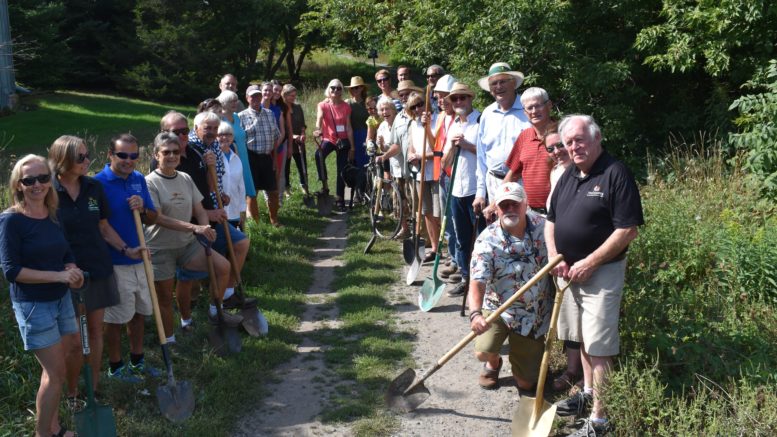 ALL ABOARD- Muncipal officals, stakeholders, users and volunteers gathered Tuesday to host ceremonial groundbreaking for the Millennium Trail project at the trail head near Lake St. in Picton. (Jason Parks/Gazette Staff)

It’s full steam ahead for the Millennium Trail upgrade project.

While work has been ongoing for the past week or more and over five kms of the trail has already been levelled and dressed, municipal officials, stakeholders and project supporters gathered at the trail head on Lake st on Tuesday morning to hold a ceremonial groundbreaking.

The rehabilitation of the Millennium Trail is a multi-year project in partnership with the PEC Trails, an informal community group and chief donor to the project. PEC Trails has fundraised $120,000 in support of the project, with the municipality committing a total of $370,000 over three years (2017-19).

But the tender process clearly showed trail improvement costs would be great and only small sections of the trial would be rehabilitated if the work was handed over to contracted companies. 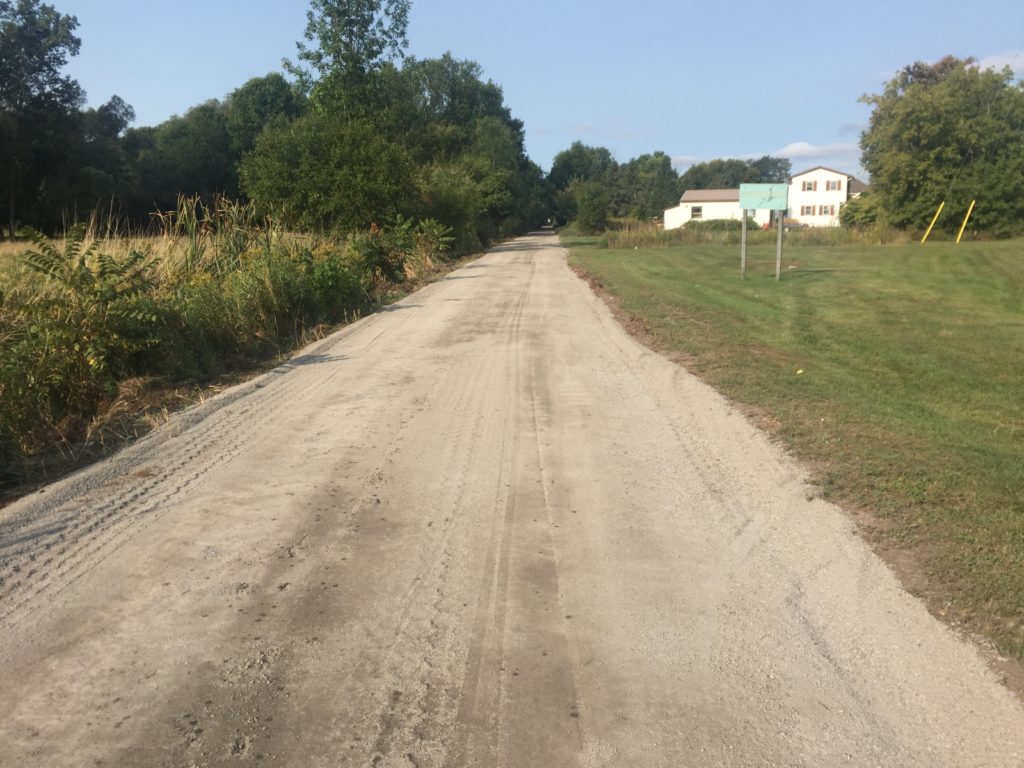 A rehabilitated portion of the Millennium Trail in Bloomfield. (Jason Parks/Gazette Staff)

Council went in a different direction and offered an ad hoc committee of volunteers to undertake the rehabilitation project that, when completed expects to see most-if-not-all of the entire length of the 46 km track between Picton and Carrying Place levelled, widened and resurfaced.

The Millennium Trail Rehabilitation Ad- Hoc Committee, which includes representatives from the County of Prince Edward and the PEC Trails, is facilitating the work with Barry Davidson serving as the project lead.

“The trust that council and staff have put in the volunteers have been quite overwhelming,” PEC Trails Chair Pat Maloney said. “Today is a great day to celebrate volunteerism and see what a dedicated group can do for many.”

Maloney referred to the Millennium Trail as a linear park and called it infrastructure that has mostly laid dormant except for a select few users.

“We all know that when it’s completed, this project is going to benefit the County,” Maloney added.

Despite tangible results from the Wellington Rotary club and lead trail rehabilitation coordinator Barry Davison by way of their quality work on the trail around the village, it was still somewhat of a leap of faith for council to turn the project over to a volunteer entity in this day and age of liability and legal hoops to jump through.

But when one polls the denizens of the horseshoe, it’s clear there’s support for this initiative and hopes that it could turn the tide of escalating costs when it comes to community improvement projects.

“We are really excited about the progress so far but this shows that the municipality can work with volunteers and get things done,” Bloomfield councillor Barry Turpin told the Gazette, pointing to the recent success of the County Food Hub and the Lovesong seniors housing project. “It shows that if volunteers get behind a project, they can push it and get it done and here we have buy in which is critical if you area going keep this going.”

Also on hand at Tuesday’s ceremony was Sophiasburgh councillor Bill Roberts who was championing the rehabilitation as a unity builder with benefits to community and economic development as well as a contribution to a healthy environment.

We are going to see more and more of this type of civic engagement and we already see it with those aforementioned projects and the independent housing authority,” Roberts said. “It’s what the community is asking for and I think it’s what Shire Hall needs.”

“It’s another nice example of where the community has pulled together is the way our County was built up through volunteers and it makes you feel mighty good to know that this practice continues and this is a revival,” Pennell said.

Acquired by the County from the Canadian National Railway in 1997, the Millennium Trail is a re-purposed abandoned rail line that was converted into a multi-use recreational feature for the enjoyment of County residents and visitors.

The 46-kilometre multi-use trail stretches from Carrying Place at County Road 64 to the Lake Street terminus in Picton, passing near Consecon, Wellington, and Bloomfield.

The trail is popular amongst a wide array of recreational enthusiasts year round, including cyclists, hikers, snowmobilers, ATV riders, and cross country skiers.