There will be some extra traffic on local roads this weekend as 38 artists show their work in 29 locations as part of the 25th annual Prince Edward County Studio Tour.

While even the artists whose studios have been on the map since Day 1 will have new work on display Friday through Sunday from 10 a.m. to 5 p.m., the first-time participants often draw a crowd of eager visitors excited to see something they haven’t found before on the tour. 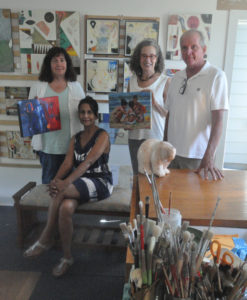 Last week, four of those artists — Paul Verrall, Indra Dosanjh, Renee Hiltz, and Jodi Shuster — gathered at a Bloomfield studio to meet one another and talk about what they’ll bring to the tour.

Verrall, a stone carver, moved to his Washburn Street home about a year-and-a-half ago. He and his wife had been visiting the community since their youth and they were drawn to the arts scene.

His workshop is a big double garage that opens onto the street. Often, as Verrall is carving Canadian wildlife using woodcarving tools, passersby will stop to see what he is working on.

“People drop by as they walk by. They’re curious with all the dust flowing out,” he said. “That’s part of the fun. I enjoy meeting new people. I hope to do that as part of the tour.”

Verrall’s different critters have been carved out of soft stones of all colours like soapstone, alabaster, cola, and African wonderstone. He spends a fair amount of time waxing and sanding them. Despite working on his craft for 11 years, he said he was a bit of a well-kept secret in his former Montreal home, initially working for himself and doing a few artisan shows to pay for more rock.

He’s excited about being able to debut his gallery inside a home built in 1875 on this weekend’s tour.

“I was looking at galleries to join, but we ended up buying a house with a natural large space for a gallery just past the entry. That became my target to set up a gallery at home and do a few events throughout the year. My wife didn’t want me to have a pool table, so we thought we’d put in a gallery.”

Renee Hiltz also set up her gallery in a historic home, hers in Wellington. While she holds a fine arts degree from York University that she drew upon regularly in a 40-year career teaching children with special needs — one that helped her win the Prime Minister’s Award for Teaching Excellence — Hiltz said her art has really blossomed in the past 10 years. Colour is a top priority and her paintings often feature abstraction, but with recognizable forms that draw people in.

“I’m loud and my paintings are loud,” she said. “I prefer abstraction, but it’s always good to have something identifiable. I always like it to tell some kind of story.”

In preparation for the tour, Hiltz has had her studio open all summer. She said she’s met a number of interesting who have visited.

“You have people coming just to look at the art and you have other artists coming. People are coming from all over just to see,” she said, adding the tour will take that to another level.

“They wouldn’t come if I just put up a sign and asked people to come. Being part of the studio tour gives a certain legitimacy in the advertising and support.”

Hiltz said she tries to schedule some time each day to work in her studio and says while her art is her work, it also has to be something she enjoys to derive meaning.

“If it gets to be too much work, it’s not joyful, it’s not spiritual and it’s not playful. The art is losing something it needs to have. I think it has to be fun.”

For Dosanjh, her studio space on the Loyalist Parkway is producing that right kind of atmosphere. After working as a technology management consultant for 40 years, she got out of the city and found a space to renovate for a studio, gallery, and yoga centre.

“My art, shall we say, is flourishing in the seven months I’ve been here. This is a dream come true for me to just drift from my house and step into my studio and paint.”

The huge departure from the stressful world of corporate work has led to a lot of new work, including a piece that won the people’s choice award at this year’s Art in the County. The nature surrounding Dosanjh has been inspirational in the free creation of art.

“I float between abstraction and figurative and representational. I like diversity in my art and don’t want to peg myself in any one direction. I just want to go where my spark leads me.”

Dosanjh works in mixed media and as she’s matured, her expression has broadened from tight, detailed oil works to all sorts of creation. She says the art is an expression of her life.

For example, she was part of the Ugandan refugee expulsion when she was 12. Living there and in England after, her work was mostly in charcoals and black-and-whites. A move to Canada brought a move toward more vibrant colour, symbolic of a barrier overcome.

A decade ago, Dosanjh discovered Prince Edward County and on a studio tour, she found herself ogling the lifestyle and studio of Margaret McFeteridge.

“Here I am, 10 years later,” she said. “I like talking to people — where they’re from and what brings them to the county… This is a great place. Being able to walk to my studio is great and everything else is a bonus.”

Shuster had been an animator at the National Film Board in Montreal, but when computer animation came along, she decided to focus more on her painting. She describes herself as mostly self-taught after almost buying and chickening out many times, she and her husband retired to the Elmbrook area last year. While she has a studio in her home, she loves to paint and give lessons in her vibrant garden. Even if life gets busy — as it has this past year — she loves to turn to her art.

“There’s nothing else I’d rather be doing,” she said. “Normally in a given week, I try to get into the studio six hours a day.”

She works mostly with acrylics and water-based media. Most of Shusters’ work is representational and she specializes in figures from the beach, which dates back to pen-and-ink sketches she did of her own children years ago. In recent years, she’s been selling her bright watercolours at the Wellington market, which has been a great place to network and to make sales. She is hoping the studio tour will bring people away off the beaten path to discover artists like her.

Shuster is hoping the tour will offer meaningful interactions.

“I enjoy chatting with people and seeing what’s going on in their lives. It’s nice to get to know them and know you’re not just a painter out on your own in the ether, you have a community to ask questions and give support.” For more about the tour, see pecstudiotour.com.