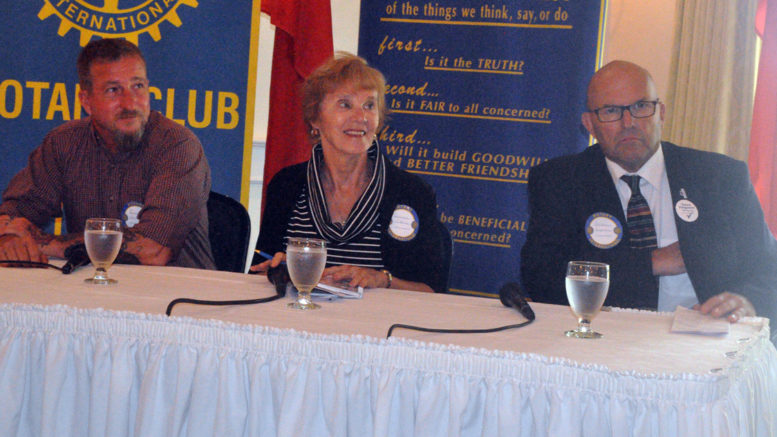 Whiten, O’Brien and Ferguson share their positions at luncheon

At the club’s regular meeting at the Waring Hall, Richard Whiten, Dianne O’Brien, and Steve Ferguson were invited to speak briefly about their background and vision before answering a series of pre-selected questions from Rotarians.

Whiten, a Picton business owner who moved to the county in 2002 from Haliburton, said he believes council has “to take some giant leaps forward” on a lot of issues to get caught up and said two of his main focuses are housing and job creation.

“We need to really focus on affordable housing and attracting more working class families to the county and industry, well you can’t have one without the other. You need both. It’s going to be a big challenge to achieve that goal.” O’Brien, a 12-year veteran of council says being raised in a home of 11 in Prince Edward County, she learned to share, to work, to compromise and to understand fairness. While she said she was enthused for the opportunity, the municipality does have “many challenges.”

She said the municipality needs a business-friendly environment that will see red tape cut and homes built. Having an effective plan for affordable housing, maintaining roads and infrastructure and creating stable employment and sustainable health care are priorities.

“I believe my experience does give me optimism, willingness, and desire to be one of the best mayors that Prince Edward County has ever had,’ she said.

Ferguson said he first visited the community in the late 1980s while living in Toronto and spent his next 20 years figuring out ways to invest here and live here. “I was so passionate upon my first visit there was no other place I’d choose to live,” he said.

The publisher of the South Marysburgh Mirror and a first-term councillor, Ferguson said he prides himself on his ability to listen and to build consensus. He also said his ability to be analytical and critical can serve him well in the job. He, too, laid out his priorities.

“My focus is on the issue of our hospital, housing, a simplified process through Shire Hall, jobs and youth, cost containment, and revenue generation.”

The candidates were asked a question about one of the hottest topics in the county of late — the municipality’s move to regulate short-term accommodations. All three supported some form of regulation, though none was completely satisfied with where the process is.

“This is obviously an issue that’s affecting many people in the county. Yes, the County’s draft bylaw came out last week. I fully believe it’s a step in the right direction. There’s obviously grey areas to be ironed out, but it has been a free-for-all. The issue is just exploding and it’s affecting the economy, affordable housing, and population growth,” Whiten said. “We definitely do need to regulate it, it’s affecting a way of life for many people.”

Ferguson said he’s in favour of regulation being put in place and has advocated for it for some time. He described short-term accommodations as a “relatively new phenomena,” however and said he’s fielded a number of concerned e-mails not about regulation, but about process.

“Speaking individually, and not for council, I think the process that was undertaken was flawed and needs to be reviewed — not just for this instance, but any issue of big public concern and public involvement. Generally, I’m in favour, but the way this one was undertaken was really not good.” O’Brien said she’d had a couple hundred e-mails about the issue. She believes some form of licensing is required.

“We do need some licensing, there’s money there. It’s tourism that’s coming in and wear-and-tear on our infrastructure, so yes we do need some kind of regulation,” she said. “A bed-and-breakfast is different to me, in your home is different. We’re not even near finished this consulting process in my opinion and nowhere near ready to think about considering a bylaw.”

Parking in Picton was also a topic of discussion with candidates asked about difficulties with Picton meters and free parking in Bloomfield and Wellington.

Ferguson said he advocated for the old parking meters when Main Street was reconstructed and said there are concerns with seniors and those with mobility issues reaching the new meters, which he said were “adapted for, I think, a younger audience.”

Ferguson said he supports a monthly or annual fee for those with accessibility issues as well as adjustments that make the pay-and-display machines easier t access and use. As far as parking fees, he supported collecting money for parking.

“We’re in a position where we have to generate as much revenue as we can from as many sources as we can. Parking is a way to do that,” he said, adding the paid parking also encourages people to move along to allow others to visit.

O’Brien said the meters have benefit, particularly with money donated for local food programs in schools. She agreed with Ferguson there’s money in parking.

Whiten said he has trouble with the cost and the reliability of the new machines, which didn’t seem to work in the cold last winter. He promised to consider parking concerns if elected.

Another question raised the long-debated council size issue. Whiten said he would be in support of reopening the debate arguing “I don’t feel we need as many councillors as we have.” He said he feels fewer councillors could lead to quicker decision making, but likely not a cost savings because those left would have more work.

O’Brien said she’d not be supportive of opening the debate, calling it “divisive to council” and “expensive to taxpayers.” She said in the three times the County has explored the issues during her years at Shire Hall, twice it went to the Ontario Municipal Board and legal fees added up. “I am not in favour of opening this debate again. The last time we did it, I think our costs ran close to $250,000 for the entire process including the OMB meeting. That $250,000 can do a lot for health care, attainable housing and other issues.”

If those issues were addressed first, Ferguson said attempts to restructure council would have to be considered based on proponents’ arguments.

He also said the municipality may have the council size issue dumped in its lap by the province and it may have to deal with it again.

Asked about the municipality’s position on cannabis pop-ups and dispensaries, candidates were mostly taking a wait-and-see attitude. O’Brien said the municipality will have to wait for a provincial mandate to take a position on whether to allow the sites. Referencing news reports of vandalism and break-ins on the Tyendinaga Territory, O’Brien said she believes there needs to be a level of control established.

Ferguson, too, said he’s waiting for more information from the province but added his approach would be one of caution.

Whiten noted “Cannabis has been referred to as a cash crop here in the county for many years” and stated whether the shops come in or not, marijuana will be available. He liked the idea of some controls through legalized sales and said there may be some opportunity for the County. “It’s a good revenue stream for the town, and a business opportunity and employment opportunity,” he said.

Candidates also addressed questions on County Rd. 49 — all agreed it needs to be fixed and the County needs to lobby the provincial and federal governments for help, a Picton bypass road that no one seemed to favour, and their plans for a publicly-owned Picton harbour. Ferguson said the municipality should take action on studies it has done on the harbour, O’Brien called it a “jewel” but wanted to see further research into how it would best offer taxpayers value, and Whiten said he’d like to study the issue more, but favours the harbour remaining in public hands.