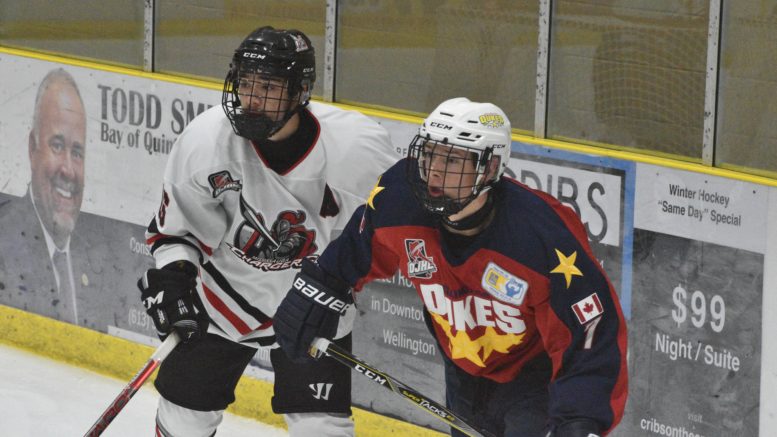 The Wellington Dukes are returning for the 2018 Ontario Junior Hockey League Governor’s Showcase weary and a little worse for wear but surely satisfied in the direction their game has turned.

After dropping a pair of home contests to Brampton and the hockey team formerly known as the Brantford 99ers last weekend in which sloppy play in their defensive zone was their undoing, Wellington tightened the screws on the play around their goal and, along with the addition of a defenceman with Major Junior experience, their fortunes changed almost overnight.

While it’s true Wellington (5-3-1) split their action over the past seven days, winning a pair and losing a pair, the club was much better in their own end and a bounce or two in their favour could have change the outcome considerably in their locals favour.

Wellington started their voyage that took them from one side of the province to the other a week ago in Kingston.

In the end on Thursday, Wellington would find themselves on the wrong side of a 2-0 score.

The Dukes would pepper Voyageurs starter Alexei Masanko with 40 volleys but the West Milford, New Jersey native was both lucky and good through 60 minutes which is a lethal combination to any opposing team.

A pair of powerplay goals through two periods was Wellington starter Olivier Lafreniere’s only blemish on a solid night of action. 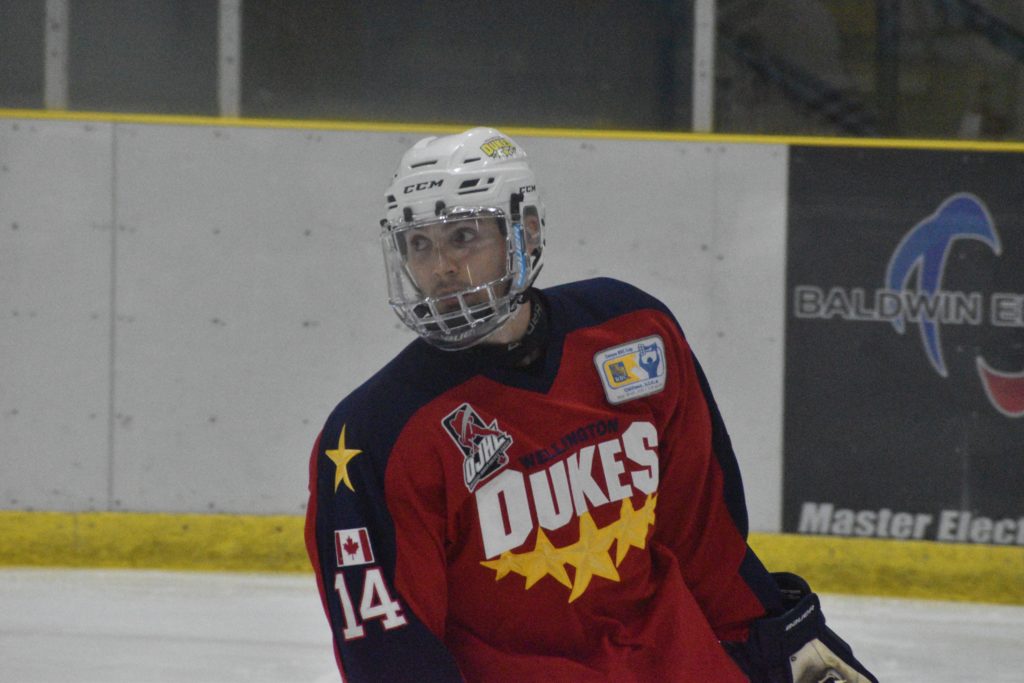 Wellington went into their lone home game of the week on Friday night with the knowledge they had done everything in their power to upend Kingston a night prior and they had a puzzle piece being added to their lineup.

Smarting after getting pushed around in their own end the previous weekend, Wellington was a much stronger group defensively for the balance of the weekend thanks to General Manager Todd Reid’s pick up of Quinn Hanna.

The Peterborough, ON native was drafted by the Ontario Hockey League’s Guelph Storm back in 2015 and has played Major Junior for the Storm and Sherbrooke Phoenix and Blainville-Boisbrand Armada of the Quebec Major Junior Hockey League.

Whether Hanna is hear for a short time and on his way back up to the OHL ranks or this pick up is more permanent, it could end up mirroring the club’s acquisition of Ben Evans a year ago where the organization identified a major deficiency and addressed the issue through trade and/or the free agent waiver wire.

Wellington’s defence was sound but their offence erupted for nine goals as they whitewashed the visiting Mississauga Chargers 9-0.

Uens added three helpers in his biggest offensive outburst of the young season.

Even Lafreniere got in on the points parade, picking up an assist and stopping 24 Mississauga volleys for his first shutout in a Dukes uniform since Nov. 27, 2015.

The Dukes would shuffle on to Buffalo and locked horns with the Burlington Cougars on Monday, coming back on the west division squad to take the contest 5-3.

Down 2-1 after one thanks to former Duke Jeff Burridge’s goal midway through the frame, Wellington fell behind even further just 22 seconds in as Max Lightfoot surprised Dukes starter Dannick Francouer early. 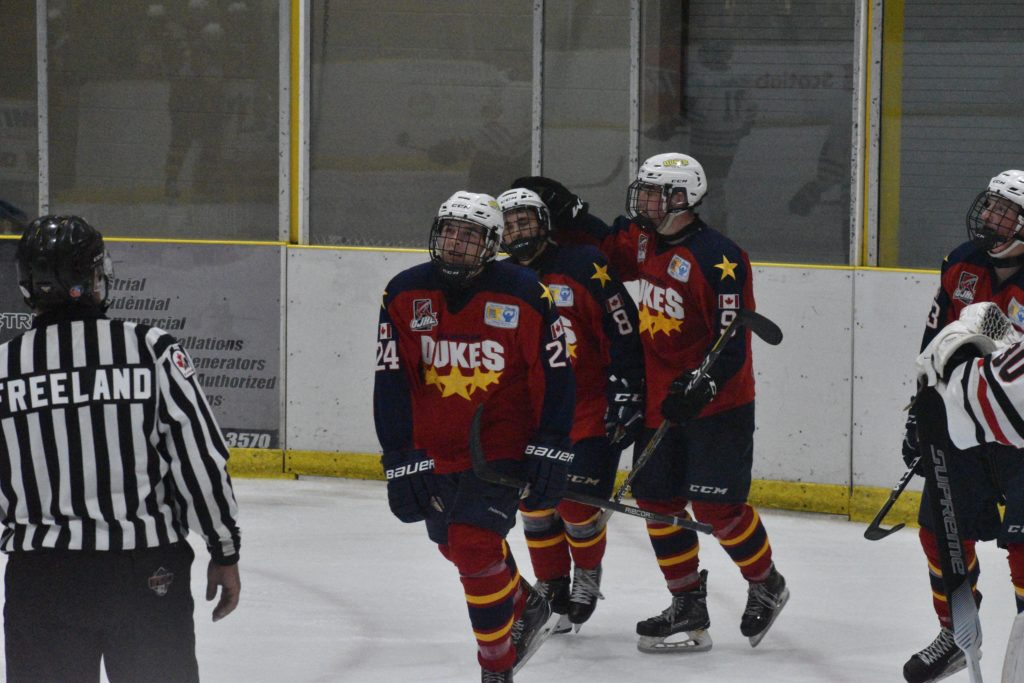 The score stayed 3-1 for nearly 20 minutes until Vitucci cashed in on the power play at 19:37 thanks to Rinaldi and Hanna to make it 3-2.

With the tables turning, Wellington soared in the third.

Elijah Gonsalves scored his second of the game at 5:58 to tie the contest at 3-3.

Exactly four minutes later, Jacob Vreugdenhil would convert a Tyson Gilmour feed to put the locals ahead to stay.

The Gilmour assist was the Toronto native’s third helper of the contest.

Just 58 seconds after Wellington took the lead, Ben Roger fired from the blueline and beat Burlington starter Matthew Dunsmoor for an insurance marker that the Dukes would not require.

Francouer made 24 stops in all as the Montreal native earned his first OJHL win.

On Tuesday afternoon, Wellington’s two game win streak would get snapped thanks to the Aurora Tigers but the Dukes, as had been the trend for the previous three games, were much sharper in their own end.

Down 1-0 after one, Dawson Ellis would score off an Eddy pass in the second to make it a 1-1 tie through 40 minutes.

Evan Pringle would put the Tabbies ahead to stay at 5:07 of the third and while Wellington would get a chance here and there to tie it, Tigers netminder Jack Irvine was solid and the contest ended 2-1 in favour of Aurora.

Wellington welcomes Trenton to the Lehigh Arena for the first time in 2018-19 on Friday and finishes the September portion of their schedule on Sunday with a trip to the Herb Carnegie Arena to play Jett Alexander and his North York Rangers.

Leads at Lehigh: The Dukes sent Nelson Powers to his hometown Napanee Raiders of the Provincial Junior Hockey League on Saturday. A night after playing on the blueline for Wellington, Powers, a member of last season’s OJHL and Dudley Hewitt Cup championship team, was in the Raiders lineup Sunday in a 2-1 win over Uxbridge.