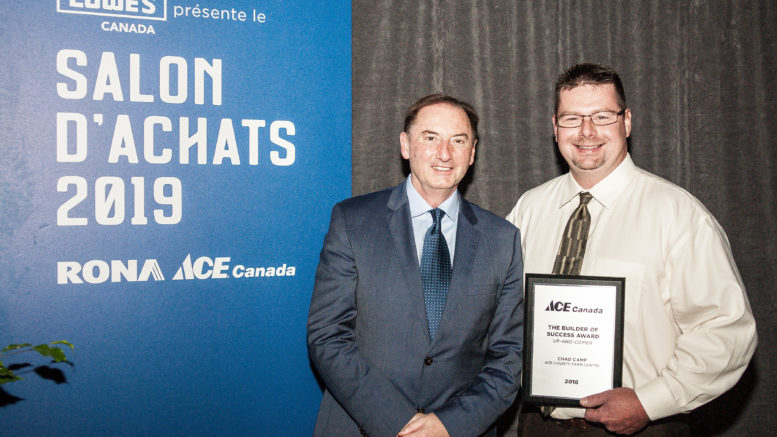 A Prince Edward County native has been recognized for his efforts by an international franchise chain.

As part of annual gala held during the RONA and Ace Canada Buying Show presented by Lowe’s Canada in Montréal earlier this month, Ace County Farm Centre manager Chad Camp has been chosen as the 2018 Up and Comer Award from the Ace Builder of Success Program.

Camp accepted the award in front of more than 1,750 people gathered to honour RONA and Ace affiliate dealers.

A new award category, the Builder of Success program was introduced this year to recognize affiliate dealers and their entrepreneurial spirit, community involvement, and success in ensuring the long-term viability of their business.

“Chad Camp is passionate about the business, and it really shows through his ambition, energy and know-how. From the time he became manager of his store in 2003, Chad has led a complete store expansion, successfully maximized new and unique categories, and has been actively involved in his community,” said Bill Morrison, Divisional Vice President for Ace Canada. “He is known as a motivating, hard working and a great leader. We are pleased to reward Chad with this year’s Up and Comer Award and thank him for his dedication to Ace and for all that he does for his employees and customers.”

Ace Canada and the County Farm Centre joined forces in February. The 7,000 sq. Ft store, located on the western outskirts of Picton, is open Monday to Saturday.

“I’m honoured to receive this award from Ace. It is a result of dedication and a team of hard working individuals pulling together and believing in each other. I would like to share this award with my team and thank them for all that has been achieved over the years,” said Camp.