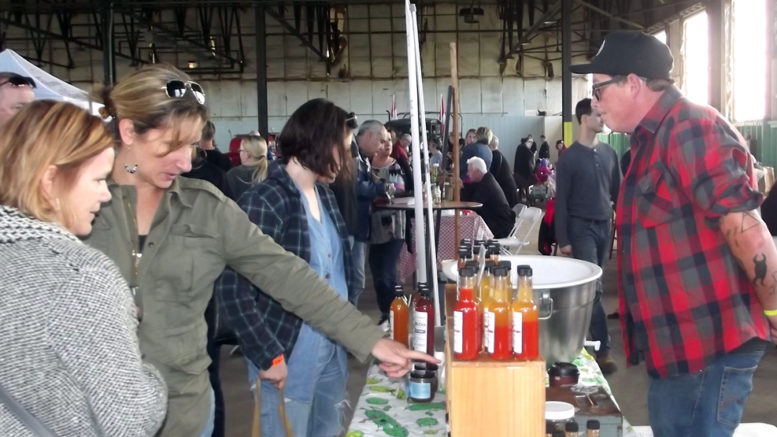 Whether you preferred wine, beer or spirits (or all three), seafood or hamburgers, exotic coffee or fresh lemonade, you could find it all at Loch-Sloy in Picton during Taste Community Grown.

Up and away – Dillon Atkinson, 3, of Ottawa dreams of being a pilot as he tests the controls on a vintage aircraft at the Loch-Slov Business Park in Picton during this year’s Taste Community Grown on Saturday, where dozens of producers showed off their products. (Terry McNamee/For The Gazette)

Sixteen artisan booths showed off rural photography, sewing and embroidery, jewelry, and yes, more edible goodies such as chocolate, cheesecake, cookies and even dog biscuits. Throughout the day, there was live music by Geoff Willingham, Telegraph Narrows and Little Bluff.

Children were able to examine historic aircraft and vehicles, take part in a scavenger hunt and decorate cookies, while the grown-ups had the chance to take part in a variety of free workshops.

Yvette the water buffalo represented the Ontario Water Buffalo Company, of Stirling, by giving rides to children and adults. For many visitors, it was the first time they had seen a water buffalo up close.

Visitors came from across the county and from further afield. Many were repeat visitors.

“We used to go when it was at Crystal Palace (in Picton),” said Kathleen Powderley of Ottawa. “This is our second time at this one (Loch- Sloy). It’s a family event. I like that they’ve got wine, beer and local food all in one spot.”

The Loch-Sloy location got rave reviews from people such as Jennifer Miller of Smiths Falls, who has been coming to Taste for years.

“I’ve been coming up to Picton for almost 20 years,” she said. “It’s neat to come to a new venue and enjoy the taste of the county.”

“This is the fourth time I’ve been here,” she said. “I’m enjoying the new venue. It’s nice to be indoors in the hangar.”

With people arriving by car and shuttle buses running from Belleville, Bloomfield and downtown Picton, the venue was packed all afternoon.

There were lineups for taste-testing at most of the booths, and business was brisk, with people making use of their free Wines of Prince Edward County tote bags to haul their purchases of everything from wine and beer to soap, pickles, teas and maple sugar.