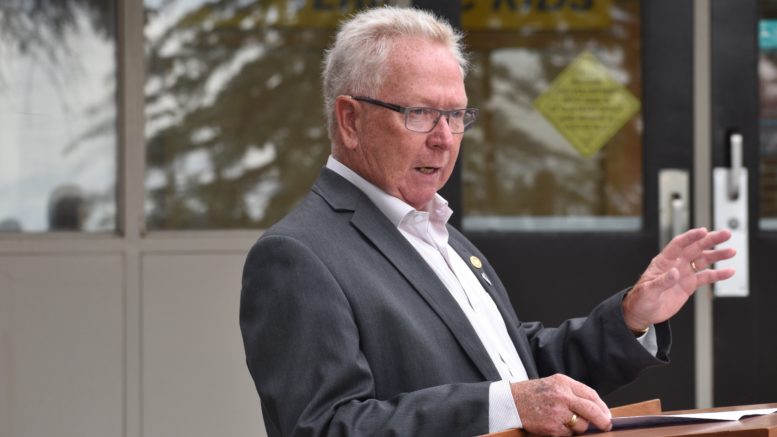 Prince Edward County council voted in favour of a motion made by Mayor Robert Quaiff at Thursday’s Committee of the whole meeting that voices support for Ontario’s Basic Income Pilot Project.

The incoming Progressive Conservative Government announced earlier this summer they would eventually scrap the project that offered a standard amount of means in the communities of Thunder Bay, Hamilton, Lindsay and Brantford.

Residents between 18 and 64 years old in those areas were invited to apply if they lived on less than $34,000 individually or $48,000 as a couple and nearly 4,000 people enrolled in the program in the intake areas.

The concept was to gauge if such a measure would reduce poverty in a meaningful and sustainable way but the province has announced its intention to wind the program down by March, 2019.

In part, the motion tabled by Mayor Quaiff pointed to 2016 Census-backed information provided by Hastings and Prince Edward Public Health that indicates 13.5 per cent of the population of Prince Edward County live in low income situations and studies have shown those living with lower income are at risk of experiencing lower life expectancies and increased prevalence of self-reported chronic diseases.

The motion urged the Province of Ontario maintain the planned increase to social assistance rates, continue the Basic Income Pilot Project and its planned evaluation and create policies to encourage good jobs with regular hours and benefits and a copy of which was to be forwarded to Premier Doug Ford, Bay of Quinte MPP Todd Smith and Minister of Health and Long Term Care Christine Elliot.

Quaiff said the motion came about after a recent Association of Municipalities of Ontario conference in Ottawa where the Prince Edward County Mayor had opportunity to speak with his counterpart from Kawartha Lakes, Mayor Andy Letham.

Quaiff said Letham reported that the Lindsay area was starting to see some significant changes in their community but haven’t been able to glean the hard data yet form the program to properly gauge the full impact of the program.

The draft resolution will apparently call on the Government of Canada to take over the project in order to get the full scope of data required to accurately determine if a basic income can affect productive and positive change on downstream issues like lower life expectancies and chronic diseases, both of which are drains on healthcare funding.

Quaiff said the up-to-date poverty stats provided at the conference are staggering and indicate 18.4 per cent of Ontarians live below the poverty line and 1.2 million of Ontario’s children live in low-income housing units.

Quaiff also mentioned that over 73 per cent of Ontarians were in favour of the minimum wage increase.

“The PC government campaigned they wouldn’t cancel the program and wanted to get the stats first but now they have and this resolution goes to the province,” Quaiff said. “If the PC’s are not going to carry on, another resolution will be forthcoming to approach the federal government.”

In other news arising from the Thursday COTW meeting:
•Prince Edward County motorists will need to observe some speed changes after the Committee voted to drop the speed limit on a pair of County roads.

On County Rd. 6, a pair of requests to drop the speed from 80 kph to 60 kph have been submitted to the Traffic Advisory Committee in recent years and the committee voted in favour of the speed reduction between County Rd. 49 and County Rd. 5.