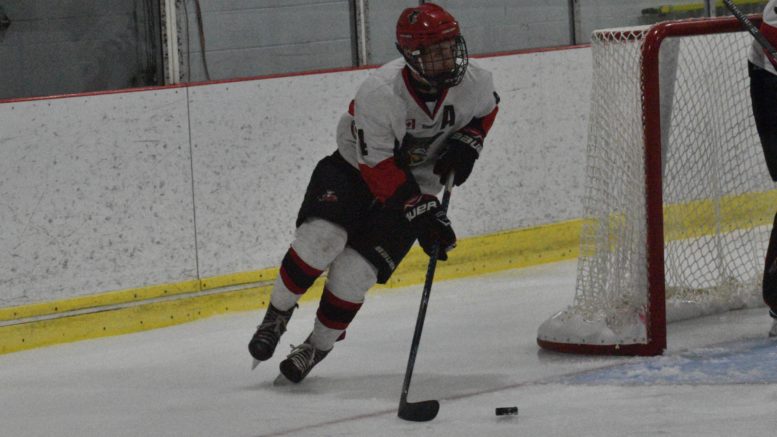 It might not have been evident based on the score board at the conclusion of Saturday night’s game, but the Picton Pirates felt they were even with the defending Schmalz Cup champion Lakefield Chiefs.

At least during the even strength portion of Picton’s 5-1 setback.

Of course, there was only about 10 minutes worth of five-on-five play so how could anyone make a determination out of what devolved into a dog’s breakfast of special teams play?

Both squads combined for incredible 24 powerplay opportunities on Saturday night with the visiting Chiefs making their most of their man-advantage chances, lighting the lamp three times with the extra man on the ice.

Sadly for the locals, Picton went 0-for-9 when they were afforded a powerplay opportunity and that was enough to hamstring the locals against the vaunted Lakefield unit who has made a regular practice of competing for Provincial Junior Hockey League glory since they upended the Bucs in seven games in the 2014 Schmalz Cup quarterfinals.

A diplomatic Tyler Green was careful where to assign blame for the outcome of Saturday night’s affair but admitted the contest was difficult to watch and even harder to coach in given the average age of his club.

To borrow a new adage, for Green’s club there are no wins and losses-just wins and learning opportunities.

“It was a very had game to coach in especially with a young team like we have,” Green told the Gazette Tuesday. “There’s a lot of frustration with what’s happening on the ice.”

Picton got off to an ideal start inside the first ten minutes when Nate Boomhower found Picton’s leading goal scorer Logan White at the 7:15 mark to put the hosts ahead 1-0.

The locals looked sure to add to that lead a little later in the frame when they picked up a two-man advantage just after the midway point of the period but a bad line change allowed Zac Treen to bust in on Picton starter Kyle McNair all alone and tie the contest with a shorthanded goal at 13:58.

But Treen was by no means finished in the first after his shorthanded marker.

Picton was called for an incredible seven minor penalties in the final four minutes of the first period, only one of which was coincidental with Lakefield.

Not surprisingly, the Chiefs had some glorious looks at the Picton net and it was Treen capping off a natural hat trick to put his club ahead 3-1 including a buzzer beater goal with just one tick left in the first period

“When we were out there and playing five on five, we had some early momentum and I thought we played well but it’s hard to judge when there’s so many powerplays going both ways,” Green added.

Including  a White slashing call at the end of the period, Picton would  incur three straight stick infractions inside the first five minutes of the second and it was Treen having himself a night, scoring another powerplay marker.

It was a clear departure of discipline for the Pirates who were the least penalized team in the Tod Division last season and the third least penalized squad in the entire Provincial Hockey League in 2017-18 although Ontario Hockey Association official Kevin Pons’ interpretation of the rulebook seemed to ebb and flow at certain points in the contest.

Despite there not being a 2-3 minute sequence where a penalty wasn’t whistled for the remainder of the game, Lakefield would only get one more powerplay goal and it was Treen setting up Dawson Turcotte with 25 seconds left in the frame to finalize the scoring 5-1.

Picton would lift McNair at the end of the second and Brennan Bush was able to come in and mop up, stopping all seven shots sent his way by the Chiefs.

“There was a lot of five-on-three against that Kyle was playing so we decided to get him off his feet and give him a rest,” Green said of the decision to replace his starting goalie.

Picton will attempt to refresh and refocus this week ahead of Thursday’s visit by the Gananoque Islanders.

Green said a bounce back effort was vital for the Pirates at this stage of the season.

“It’s important, the Islanders are in the middle of the standings and every game is important for home ice in the playoffs and I’m eager to see what the rebound is like and see if the players can learn from this,” Green said.