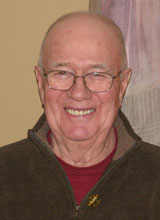 Francis H. “Frank” Clarke
February 25, 1927 – February 9, 2018
Husband of Jean Clarke. Brother of E. Mattis “Bett”. Father of David (Penny), Terry, Heather (Brian) Foubert, Melanie Seymour (Darryl Wilson), Darren (Marci). Grandfather and great grandfather. Predeceased by parents Harold and Hettie Clarke. Frank was born at Hillier, then soon after, the family moved to N. Lakeside Consecon Lake where he attended N. Lakeside School and Consecon High School. After which he went to work at Armed Forces Base, Trenton which at that time was Air Force Base and in the spring of 1947 drove the big Runway Snowblower to Wellington to clear Highway 33 which was completely closed and Prince Edward County with no access, he became quite a hero at the age of 19, there are many stories and pictures to attest to this event. Frank then went to work for National Grocers then Coca Cola in Belleville. At this time Frank and Jean built their home at Melville. After 16 years at Coca Cola he decided to go farming and they bought the Closson farm which is now the Lavender Farm. The selling of the farm came about due to so many government regulations and costly requirements coming into effect. Making the decision to return to the home at Melville and worked as a welder and heavy equipment operator with McFarland Const. Co., when he retired he drove school bus and in summer months drove transport for Mordon’s Transport. When he retired from these jobs he took up carpentery which he excelled at making Shaker style furniture or whatever people would request him to make. He took great pride in his work and with his loyal dog Lacey by his feet would work in this shop dawn to dusk. Franks love of tinkering and knowledge of mechanical workings was a help to brother-in-law Bill Hardy in his Skidoo shop. They would work all day then join the skidooing gang at night, and on the odd weekend neighbourhood races, all which Frank enjoyed so much. Frank and Jean loved to have family and friends around, especially grandchildren and enjoyed so much the dances at the Masonic Hall in Consecon and Hillier Hall, unfortunately Arthritis took over Franks love of all these activities and became crippled and suffered for years and after many operations he was unable to get around at all, but he had his constant companion who bought much joy, his little dog, Casper. Thanks to everyone for keeping in touch after we moved to Belleville and to neighbours in Melville for helping us during the last 5 or 6 years living there. All was greatly appreciated.