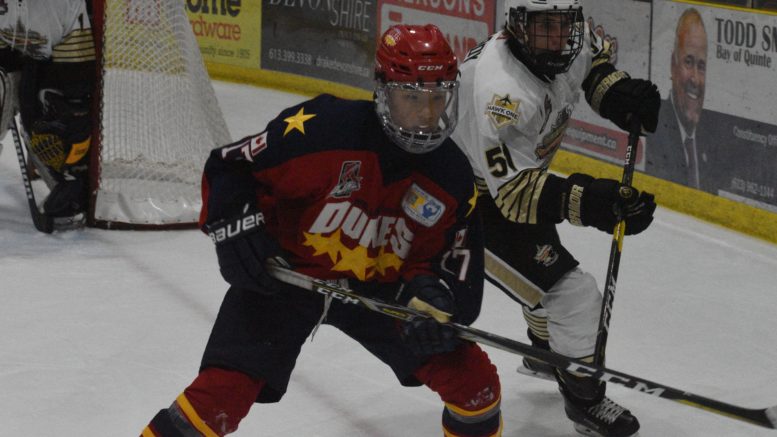 There haven’t been many lost weekends for the Wellington Dukes in the past 12 months but any observer certainly would chalk up the previous two contests played by the locals as regrettable and forgettable.

On Friday at Lehigh Arena, Wellington was in the driver’s seat late against their arch rivals from Trenton but somehow managed to snatch a tie from the jaws of victory in a 3-3 draw that felt more like a loss than anything else.

On Sunday in North York against Prince Edward County native Jett Alexander and his Rangers, Wellington got off to a poor start and trailed 3-0 just 12 minutes into the contest.

The club never recovered and lost to the south division co-leaders 5-1.

A single point out of a possible four isn’t quite enough to throw the baby out with the bath water but it’s clear the Dukes are in a state of flux as calendar turns to October and the grind of the regular season starts to wear in earnest.

Friday’s game started off with a bit of a lull and it was Trenton getting on the board first as Mason Hardy’s powerplay point blast at 12:10 netted the Golden Hawks a 1-0 lead.

The Dukes would handle the scoring in the second and it was a pair of well placed passes that put Wellington ahead by one.

At the 4:49 mark, Elijah Gonsalves found Tyson Gilmour going right while Trenton netminder Anand Oberoi was looking left and the Toronto native made no mistake tying the score at 1-1. Less than a minute later, it was the same combo again connecting on a pretty pass that originated from below the Hawks goal line and ended up with Gonsalves accepting the Gilmour dish and pounding the puck into the half open Trenton net to make it a 2-1 Wellington lead.

Despite the advantage, the first 40 minutes weren’t exactly as Dukes head coach John Druce would have preferred them as Wellington starter Olivier Lafreniere was busy, facing 32 shots in just two periods of play.

In the third, Trenton kept up the attack and tried to victimize Wellington but it was the visitors who fell prey to another pretty pass sequence.

Dawson Ellis and Dalton Bancroft made quick work of the Golden Hawks defence and the puck found the stick of Ben Woodhouse at 9:36 to put Wellington in control of the contest at 3-1.

That two goal cushion lasted less than a minute however as Jacob Campbell beat Lafreniere high to the blocker side to get Trenton back in the game.

A pair of Wellington minor penalties did the club in from there.

A charging call to Gonsalves at 15:12 was likely warranted but far worse had not been called by the officiating crew.

But the cross checking call to Wellington defender Quinn Hanna was barely a garden variety infraction at the best of times and was tough to see in a one goal game late in the third period.

With a 5-on-3 advantage, Hardy once again played triggerman, beating Lafreniere high at 16:23 to tie the game at 3-3.

Wellington would have a powerplay opportunity in the first overtime they couldn’t do much with and the club was forced to kill a pair of penalties in the second five minute stanza to keep the visitors from gaining the extra point.

On Sunday in North York, a pair of defensive zone turnovers in short succession led to Ashton Stockie staking the Blue shirts to an early 1-0 lead.

Under minute later, it was Grant Spence picking up a loose puck off a scramble and beating Lafreniere upstairs to double North York’s lead.

Later in the frame, Spence picked up his second of the game off a nice feed from the blueline to make it 3-0 for the hosts.

Wellington’s lone goal came at the end of the first when Madoka Suzuki tapped in a Woodhouse rebound at 15:31 to get the Dukes back on the board.

Stockie would bulge the twine in the second to extend the North York lead and Spence finished off his hat trick with just 13 seconds left in the game.

Alexander stopped 26 of 27 Wellington shots to pick up the win.

Wellington hosts Cobourg on Friday evening and then head to the Greater Toronto Area for a pair of games, taking on Aurora on Saturday night and visiting the Toronto Jr. Canadiens on Sunday evening.