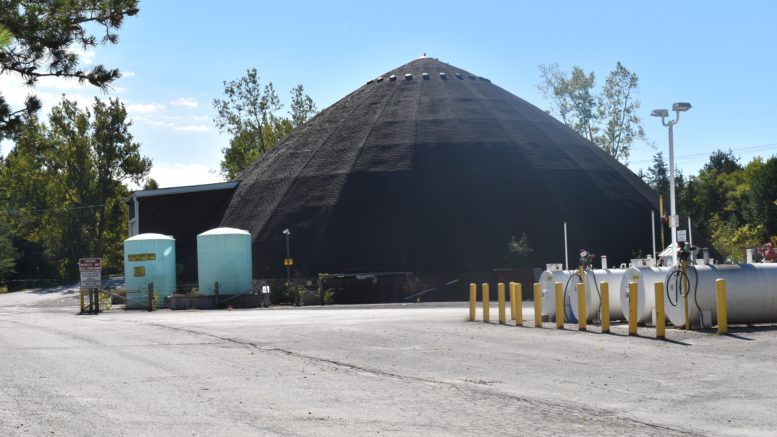 A storage structure at the County of Prince Edward lands just outside of Picton on Sandy hook road. (Jason Parks/Gazette Staff)

After the tender process was unable to complete the entire scope of work required in the allotted budget, Prince Edward County Council has voted to replace the covered building at the Picton yard (Sandy Hook) and put off fixing the Demorestville and Ameliasburgh salt storage domes until later in 2019.

At Thursday’s Committee of the whole meeting, council voted to award a $506,000 contract to Wemp & Smith Construction Limited for the supply and construction of a membrane covered storage building at the Sandy Hook facility.

According to a report submitted to council by the Engineering, Development and Work Department, all three storage buildings were earmarked for rehabilitation funds in the County of Prince Edward’s 2018 Capital Works budget but, sometime this year, the existing storage building at the Picton Yard was deemed unsafe for entry and use, therefore there is no longer indoor, covered storage for equipment at this location.

The construction budget for the Picton storage building was $505,868 after surveying and geotechnical investigation fees were subtracted from the 2018 Capital Project Budget of $512,000. The low tender bid received from Wemp & Smith Construction Ltd. was in the amount of $506,000.00 plus HST.

The Ameliasburgh and Demorestville storage buildings were included as provisional items in the tender to be completed in 2019. The low tender bid received from Wemp & Smith Construction Ltd. was in the amount of $1,206,600.00 plus HST.

Ultimately, the original tender was cancelled as the solitary bid for replacement work on all three buildings was considerably over budget and the Capital Budget for the Picton storage building was requested to be increased and approved as this is the storage building which has deteriorated beyond use according to the report.

A new tender was released in 2018 with minor changes to the scope of work and the additional of a geotechnical report for the soil conditions at each location to provide further information to bidders.

Councillor Brad Neiman asked if the Picton storage unit was now in need of replacement because necessary upkeep and repairs weren’t undertaken previously and wondered what would be required for a solution for the structures in Demorestville and Ameliasburgh.

Commissioner of Engineering, Development and Works Robert McAuley said the plan would call for the eventual replacement of both buildings.

“As you can tell from the tender, there was quite a price shock so the intent is to complete the Picton building first as it is most impacted and we are unable to use it and then re-budget in 2019 for the Demorestville and Ameliasburgh buildings. There have been some modest repairs but I wouldn’t suggest they extended the useful life of the properties,” The commissioner said.

Neiman maintained that the buildings could be repaired and extend the usefulness of the facilities but McAuley said the Ameliasburgh storage was going to meet its end sooner rather than later.

Councillor Janice Maynard pointed out that funds for all three structures were earmarked in the 2018 and wondered why council couldn’t approve rolling over the remaining funds and fixing the two remaining structures in 2019.

McAuley said the capital sustainability reserve is under severe stress and protecting the envelope of the funding that was left over after the Picton replacement given all the other projects and initiatives that draw from the fund was the best step at this place and time.

Given that both structures will require extensive repairs or replacement in the next year, staff will submit a capital request for the 2019 Budget for Council’s consideration.