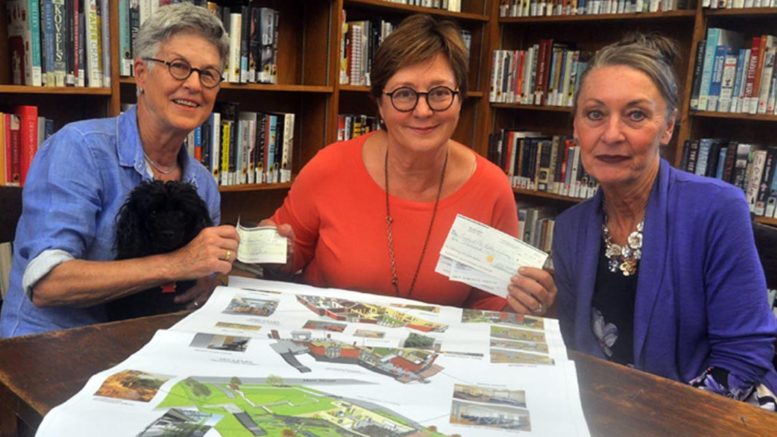 Every dollar counts -Elizabeth Etue, left, hands a donation to the Picton library branch expansion project to fundraising committee chair Alexandra Bake, centre, and the County Library’s chief executive officer Barbara Sweet. Thanks to an anonymous donor, any gift to the campaign made in the month of October will be matched dollar-for-dollar up to a maximum amount of $100,000. (Adam Bramburger/Gazette staff)

Book it! Your donation, that is. There’s no better time than Canadian Public Library Month to help the campaign for the Picton branch expansion project.

An anonymous donor has pledged to give up to $100,000 in matching funds toward the “It’s overdue, time to renew” drive to raise $2 million for a build-on that will double the size of the 110-year-old Main Street branch.

“It would make me the happiest person if by the end of October, we could announce we had raised $200,000,” said Alexandra Bake, the chairperson of the fundraising committee.

Bake also said with the municipal election ahead Oct. 22, it is a good time for the public to show just how it values the library.

“I think it’s vitally important, also, being this particular month of election to show support for public institutions like our libraries that are so dependent on municipal favour when it comes to funding.”

Bake said the community has already made it clear that it considers libraries a vital service at all six branches. At the Picton Fair, council candidate Ray Hobson polled guests on the most important services in the community and Bake said the library topped the charts among about 150 respondents, far above the next highest entry. In Picton alone, 3,400 people visit every month.

“The library is on people’s radar,” Bake said. “It’s an incredibly well-used facility across the county in all six branches and we really need this extension to be built.”

The modern addition would house an expanded collection and add a new lecture theatre, an enlarged children’s area and dedicated Makerspace, a digital lab, green walls, a performance space that can be rented by not-for-profit organizations, and some quiet spaces to read with comfortable chairs and good lighting. There will also be landscaping improvements facing Mary Street.

It is hoped ground will be broken in spring 2019.

As of last week, the Library’s chief executive officer Barbara Sweet said $1,256,254 had been raised through bequests, donations, a commitment of development fees from the municipality and grant from the John M. and Bernice Parrott Foundation. She hopes fundraising efforts will put the campaign over the top.

“We’re determined to do it without going back to the municipality,” Sweet said, adding a few large chunks of money, including funds from the David Frum talk in July are still to be counted. Bake said anyone can step forward to help the library. “Every donation is important and it is well received. If everybody does a little bit, we can do a lot, rather than relying on a few stalwart people for big dollars.”

In the coming weeks, there will also be several opportunities to give back through programming initiatives for the committee. On Oct. 12, authors Vicki Delany and Linwood Barclay will discuss their craft at the Picton branch. Oct. 28 will see a gala fundraiser, Night at the Library, staged with $50 tickets available at all branches. Next month, CBC Radio’s  As It Happens personality Carol Off is slated to appear.

The library will remain open during the renovations and Bake said she is also hopeful that once the shovel is in the ground, fundraising will take another step forward.

Already, the anonymous gift is paying dividends. When Bake announced the gift Thursday, three members of the fundraising committee made pledges themselves. One day later, there was $7,000 collected, which became $14,000 due to matching.

One of the donors, Elizabeth Etue, told the Gazette she had always planned to donate, but hearing about the gift inspired her to get her money in and maximize it.

Donations can be made at any library branch or through peclibrary.org and CanadaHelps. Those offering bequests or looking for naming rights can contact Sweet at 613-476-5926 or cao@peclibrary.org.