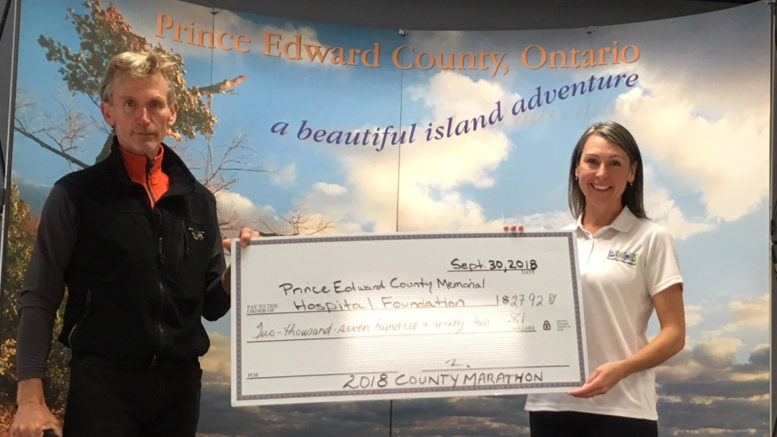 It was a good day for locals at the 15th annual County Marathon Sunday.

Under cloudy skies and ideal cool conditions, Prince Edward County native Matthew Bird Loreto became the first native son to claim the trophy as the male and overall champion in the full marathon.

Bird Loreto ran the course in an official time of 2:44:53.1, nearly five minutes faster than defending champion John Bauer, of Hamilton, who ran in 2:49:43. A hard year of training paid off for the champion, who took three hours and 50 seconds to complete the race a year ago. Bauer remained fairly consistent, saving about a minute off his pace from a year ago. Corey Turnbull, of Smiths Falls, turned in a third-place finish with a time of 3:01:14.3

Amanda Knegje was the top woman among 41 competitors jaunting the 42 kilometres from Wellington to the Crystal Palace this year. She crossed the finish line with a standard of 3:23:58. The margin of victory was very similar to that in the men’s race with Julie Bates, of Inverary, Ont. coming a hair under five minutes later at 3:28:26.6. Sarnia’s Ashley Manning would place third with a time of 3:29:58.3.

In all, 119 people took part in the full marathon, a Boston qualifier, which was down from 179 people last year.

Health care in Prince Edward County was also a big winner as 28 teams of four took part in the Prince Edward County Memorial Hospital Foundation team relay challenge. Team Walsh was the fastest group in the competition, clocking in at 3:09:10.7, ahead of entries like the Speedy DJs, Liar Liar Legs on Fire, and Marmora Madness.

The foundation has been partnering with the marathon committee sine 2009 for the promotion that not only emphasizes physical fitness, but also brings in funding for needed priority hospital equipment. This year, the committee presented the foundation a cheque for $2,729.81 immediately following Sunday’s race. The donation brings the County Marathon’s cumulative total to $12,331.47.