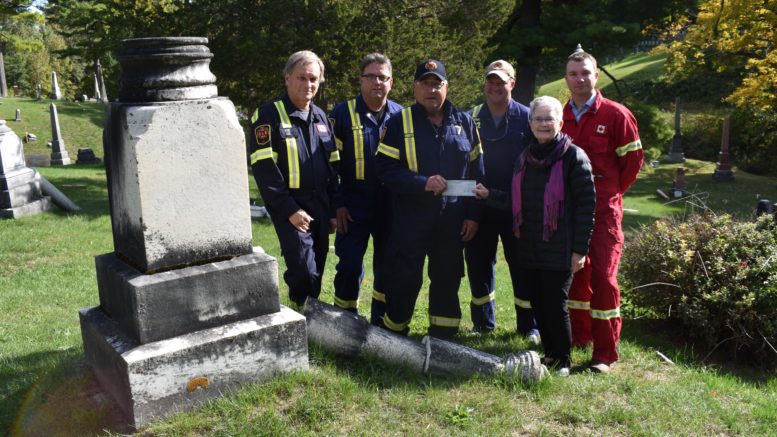 The ongoing restoration work at Picton’s Glenwood Cemetery is benefitting from a group of local firefighters.

Members of the Picton Firefighters Association were at the ‘City of the Dead’ on Friday morning to present Glenwood President Sandy Latchford with a cheque for $1,000.

The cemetery board continues to address the damage done from a late June vandalism spree that saw a pair of young people allegedly topple and damage around 200 historic stones including a 100-year old celtic cross.

Damage to the stones, many of which cannot be replaced and are well over a century old, is in excess of $150,000.

The young people were each charged with mischief over $5,000 and will be in Picton’s Youth Justice court later this month to answer to the charges.

Firefighters and Latchford gathered around the Cauhghey family stone, one of several century-old monuments that Latchford described as ‘Orphan Stones’ the cemetery is dealing with.

The Caughey patriarch died in 1904 and attempts to connect with descendants has not been successful thus far.

“We have been able to reach out and contact some direct descendants who have been helpful with the repair costs but there’s so many stones with names that are just not local families anymore and they have no connection to Prince Edward County,” Latchford said. “It will ultimately be left to the cemetery to bear the costs of fixing and repairing these memorials.”

Paul Vidito of the Association explained the funds presented on Friday come from the annual Christmas tree sale.

“These are dollars that are raised here the fund goes right back into the community and we fell this is a very worthwhile cause to support at this time,” Vidito added.

For a list of damaged monuments complete with family and given name and year of passing, please visit http://glenwoodcemetery.ca/list-of-damaged-monuments/