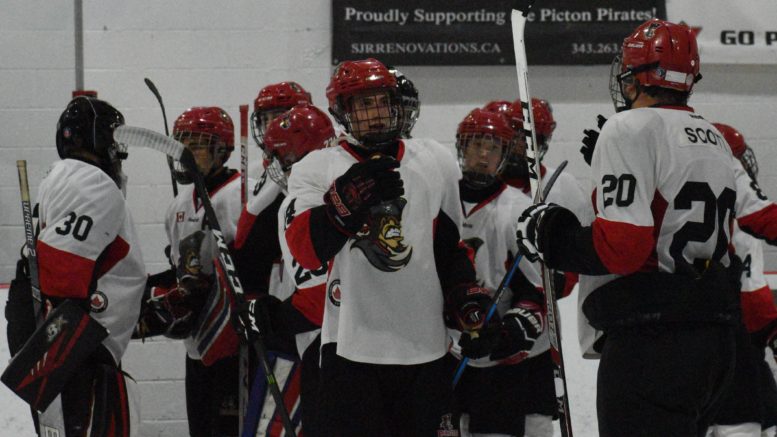 The Picton Pirates are developing a great knack for putting a tough defeat behind them and redeeming themselves in subsequent games.

The pluck of the local Provincial Junior Hockey League outfit was evident this weekend as Picton rebounded from a 5-1 defeat at the hands of Lakefield Sept. 29 to down the Gananoque Islanders and North Kawartha Knights in successive games.

This mirrors the start of the PJHL season for Picton where they dropped their opening game by a lopsided score but then went on to dominate the competition in the next two contests.

The Thanksgiving weekend wins put Picton back over the .500 mark with a 4-3-0 record which is good enough for third place in the Tod Division, just a point behind second place Amherstview. 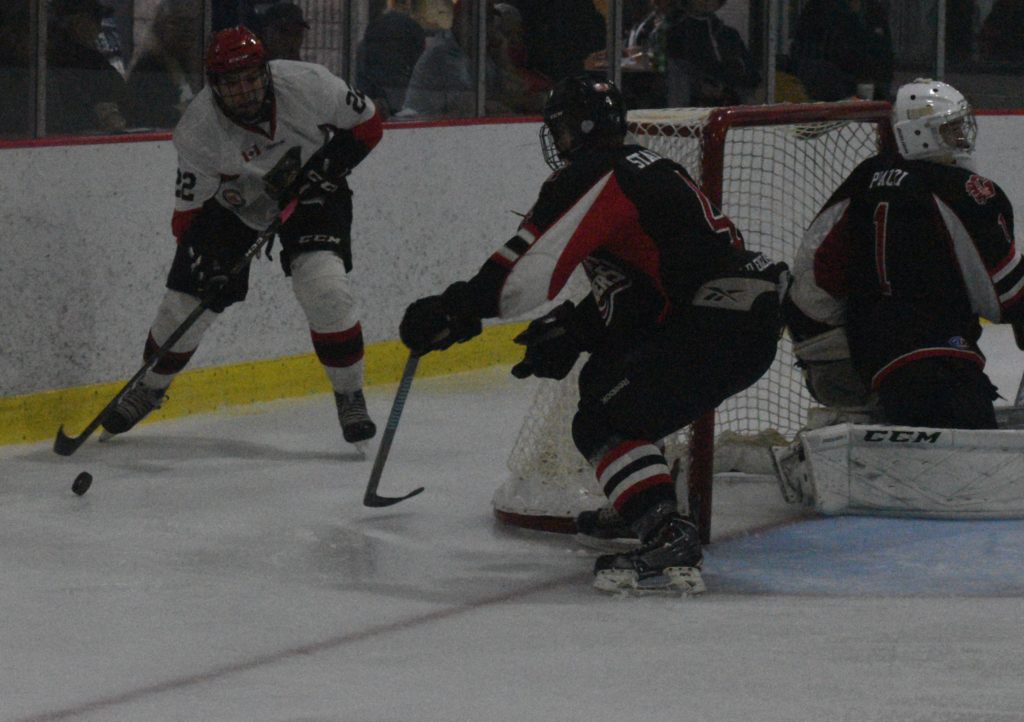 Picton bench boss Tyler Green was thrilled with weekend’s results for the Bucs as they started out shading the visiting Isles on Thursday night 2-1 before travelling to Apsley and withstanding a late game comeback bid by the host Knights 4-3.

“On Thursday, I thought our team lacked the consistency and effort we are capable of but we showed some pretty good character in finding a way to get two big points,” Green told the Gazette. “On Saturday, you couldn’t ask for anything more. The players played a team game and kind of figured out for themselves that there’s success to be had in our system and they really put in a tremendous effort.”

Picton could have dug itself a big hole on Saturday night as the club took the game’s first four minor penalties and were outshot 20-11 by the North Kawartha club.

But Picton was able to escape the frame with a 2-0 lead thanks to goals from Will Harrison and Riley Manion and some spot on goaltending by Brennan Bush.

“We were able to withstand the penalty trouble and our penalty kill was big factor in that game,” Green said. “(Bush) was outstanding in that period, he was able to come across and make some big saves and be technically sound and guys on the bench were really feeding off that type of effort.”

The Knights would cut the Picton lead in half in the second frame thanks to a Ben Oke goal but the Pirates were able to take a lead into the third.

In the final frame, Matt Poole would breakthrough with a powerplay goal at 5:16 only to see Cole Arnold and the Knights come back inside a minute later to get the hosts back within a goal at 3-2.

But less than 30 seconds after that North Kawartha goal, Pirates forward Landon McLellan beat Knights netminder Luke Miller for his third point of the game and a 4-2 Picton lead with just under 15 minutes left.

A young team that gets on roller coaster momentum shifts like the one the Pirates endured in the third period of Saturday nights game can be hard to get off but Green liked the way his club responded overall.

“It really speaks to the character this team has when they can respond like they did,” Green said. “Obviously you try to avoid the big swings but it doesn’t always happen that way in the game of hockey especially when you have a young group like we do.”

Former Wellington Duke Trent Schutt now plying his trade in North Kawartha was able to get his club to within one after he scored in the final minute but the Knights would get no closer thanks to Bush and his 39 save effort. 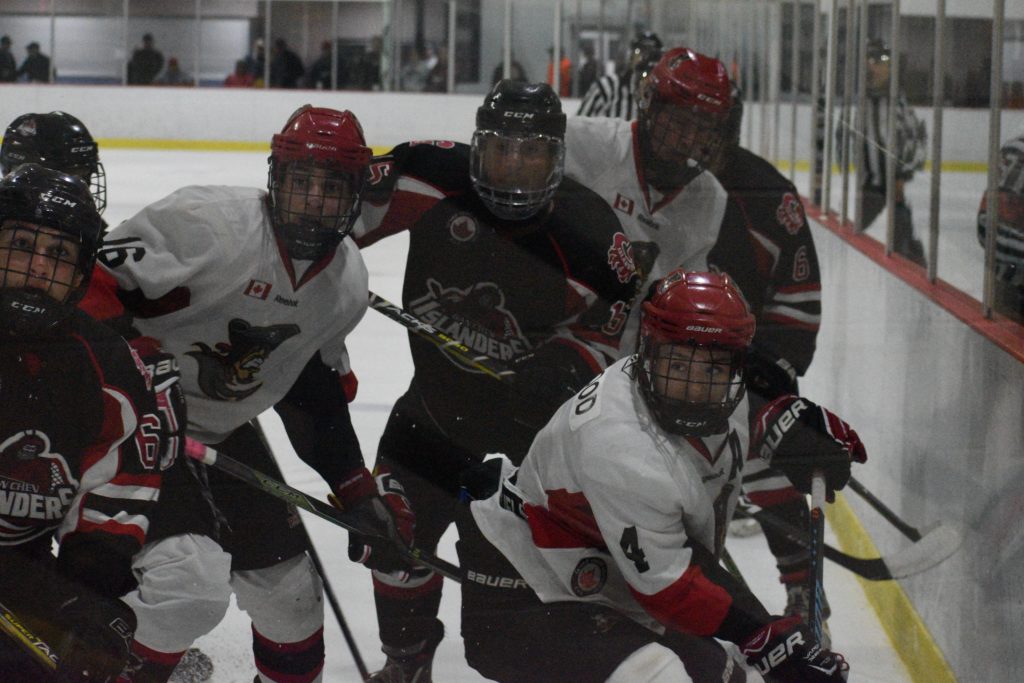 The action was fervent in the Picton Pirates end during the final minute of play in Thursday’s 2-1 win over the visiting Gananoque Islanders. (Jason Parks/Gazette Staff)

On Thursday, Picton needed a third period goal off the stick of Poole to break a 1-1 deadlock in a game where they probably should have been leading through 40 minutes.

Green agreed that the contest was a dangerous game for Picton at that point.

The Pirates seemed to be outplaying the Islanders but didn’t have the finish around the Gananoque net and were one bad bounce away from losing control of the game.

“I thought we were on the wrong side of the bounces all night and some the veterans in our lineup haven’t been scoring as much as they would expect so there were some guys gripping their sticks pretty tight,” Green said. “Buy we knew we had to maintain focus on a team effort if we were going to win that game.”

Down 1-0 after one, Picton was able to tie it in the second thanks to a glorious individual effort by McLellan.

Using his large wingspan to help kill an Isles powerplay, the Shannonville native was able to bat down an errant Gananoque pass and chip it to open ice.

Using long strides, McLellan out skated the Gananoque defender to earn a partial break and put a brilliant shot past Islanders netminder Jeremy Piazzi at the 14:21 mark of the second to tie the game 1-1.

In the third, Picton finally got the neutral zone bounce that eluded them all evening when a Noah Brant clearing attempt dropped at centre ice and Poole was able to swoop in and deftly chip it past an Islander to create a breakaway.

With the contest on his stick with just under eight minutes left, Poole broke in on Piazzi and rifled a shot in the top corner to finally put his team ahead 2-1.

Although not tested as much as his counter part, Bush stopped 21 of 22 shots to pick up the win.

Picton will draw a pair of Orr Division opponents this weekend, taking a rare Thursday off before travelling to Uxbridge and playing the Bruins on Friday.

Picton then hosts the Little Britain Merchants on Sunday night for a 7:30 p.m. Puck drop.

On Board with the Pirates: After serving a two game suspension, Griffen Conger draws back into the lineup this weekend…Devin Morrison missed Saturday’s action with a shoulder injury but is expected to play Friday…Owen Dever also missed Saturday’s game after a dust up late in the third period of Thursday’s game with the Isle’s Nick Stafford.