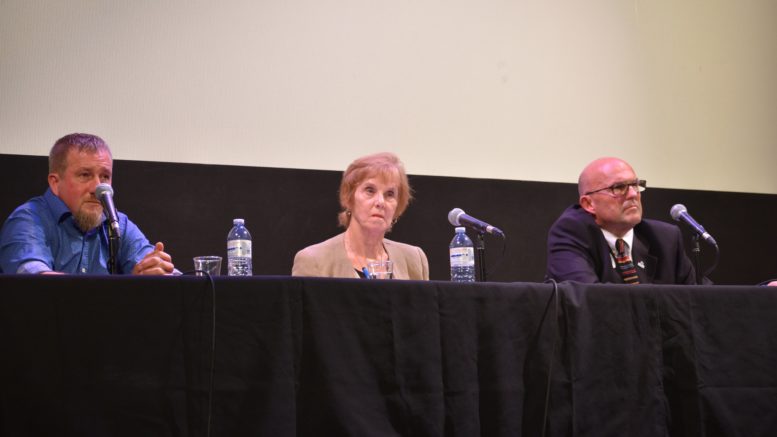 A near-capacity crowd of over 400 engaged Prince Edward County voters turned up at the Regent Theatre on Wednesday night to hear from the candidates running for the position of mayor.

Steve Ferguson, Dianne O’Brien and Richard Whiten are all hoping to be at the head of the horseshoe when the new council is installed later this year and the citizenry peppered the trio on current and prospective issues facing the municipality.

Ferguson came Prince Edward County for the past 30 years and lived in Milford for the last decade where he publishes the Marysburgh Mirror and is the South Marysburgh representative on County council.

O’Brien is a County native that has served multiple terms on Prince Edward County Council for constituents in Ameliasburgh and has 30 years experience in the telecommunications industry.

Whiten, a Haliburton native, is a small business owner in Picton and would be considered an eager political neophyte.

All three are passionate about the direction of Prince Edward County and the municipal governance structure.

When questioned about roads, all three candidates recognized the state of the the municipality’s 1,100 km of roadways and admitted that other levels of government would need to be pressured to bring some of them up to an acceptable standard.

“We somehow have to grapple with this issue through funding by way of provincial legislation or generate funding through the tourists that are using them so much,” Ferguson said.

O’Brien said Prince Edward County was facing a significant financial challenge now and in the future with regards to its roads.

“There’s no crystal ball and there’s no pot of money to fix them. The provincial and federal governments are talking about investing in infrastructure and it’s up to the mayor to lobby these to two levels to recognize the importance of rural communities,” she said, adding the creation of a roads committee would be able to examine urgent issues more quickly and lead to better fact-based decisions surrounding maintenance and upkeep.

Whiten said county roads were simply seeing far more traffic than they were ever designed to take.

“Bandaid repairs are not working and they need to be properly fixed and that’s going to take money and we need to pressure for provincial and federal help on this. There’s no way our tax base can support it,” Whiten said.

Sophiasburgh farmer and former councillor John Thompson queried the level of support the candidates would have for a tax relief mechanism for farmers who have seen their assessed farm land values rise by 25 per cent for a second year and grow their tax contribution to the County’s coffers from 1.6 per cent to 2.2 per cent, the largest segment of growth in the municipal tax structure on a year over year basis.

“Are you willing to support reducing the farm tax ratio to ensure the percentage of municipal tax revenue contributed by the farm property tax remains at the 2018 level?” Thompson asked.

Whiten said he would. 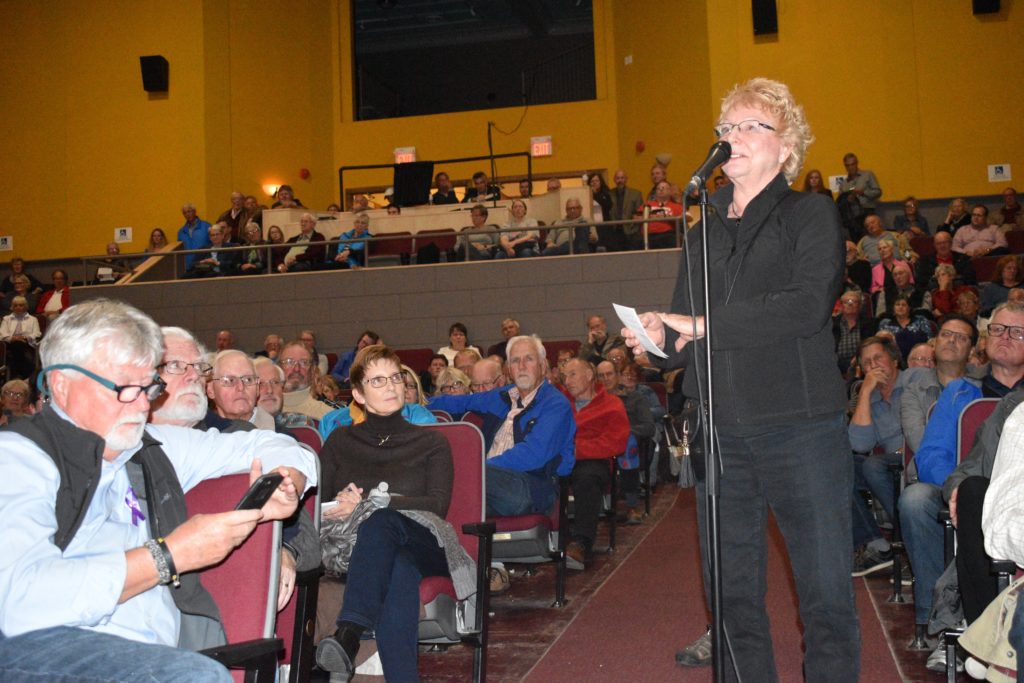 “Our small family farms at the backbone of this community and I think we need to do everything we can to support them just like any other small business to help stay in business,” he said.

O’Brien was more coy, saying she would like to see the results of the new young farmer assistance program crafted by the municipality following the public debate over the issue earlier this year.

“We do have the new program for new and young farmers and I would like to see if that program reduces the vulnerability for the young farmers of Prince Edward County is working,” O’Brien said.

Ferguson was equally elusive in flat out supporting a farm tax ratio reduction next year, pointing to a pair of factors.

“The issue of the farm tax ratio has been contentious,” Ferguson said.

The candidate said pushing the distribution of the farmer’s share on other segments of Prince Edward County land owners would have created a dangerous precedent and set the table for a similar request from the commercial class which is likely to see an increase in the coming years.

Affordable housing continues to be at a crisis point and Chamber of Commerce member Penny Rowlinski wondered what action would candidates take to ensure people can remain here and bring young families to Prince Edward County.

O’Brien felt collaboration was the key in order to fully identify the root problems and address the issues.

She added that approaching Habitat for Humanity with identified parcels of land would also be a measure that could help stem the tide of people getting priced out of the local housing market.

“I think we can find reasonable, affordable housing if we get the right people at the table,” she said.

Ferguson said members of the development community might have input towards a solution and harkened to the Short Term Accommodation measures before council.

“That’s not to confuse the two issues with one another but housing stock has been removed from the market.That housing stock my be attainable or may not but those are options that need to remain on the table,” Ferguson said.

The councillor from South Marysburgh added the newly founded not-for-profit housing corporation would address specific opportunities at locations in Prince Edward County- the Lovesong Project at the former Pinecrest Memorial and the attainable housing project proposed for the old Wellington Arena among them- and would be another mechanism to support attainable housing.

“Lack of attainable housing is a very serious problem that’s not lost on anybody but it’s going to require a very concerted effort,” Ferguson said.

Whiten said it was important to keep looking beyond Prince Edward County’s borders for solutions and added an influx industry and jobs would bring young families here.

Russell Wager of Wager Farms on Big Island asked about relaxing load restrictions on county roads for farmers trying to get their product to market.

“There’s an urgent need to ease half load restrictions on County roads which are a barrier to farmers who need to bring their soybeans and corn to fill contracts,” Wager said. “Farmers do not control the delivery dates and these deliveries should be included with other essential services such as the transportation of milk, potable water and animal feed as they are required to meet the market demands of human and animal needs.”

Ferguson said the elimination of the axel load restrictions is something “we owe to the farmers not only for the service they provide to the community but to the world in feeding us.”

O’Brien was also in favour of removing the restrictions.

“I see this as not just a business concern but as a safety concern I know that you have to ship day and night to keep up,” she said.

Whiten called himself the “odd man out” on the issue and declined to commit to easing the half load restrictions until the roads were in better shape.

Chamber President Sandy Latchford wondered what the candidates would do to adrress the chronic laobur shortage that seems to affect all employment sectors in Prince Edward County.

Whiten said the issue was connected to attainable housing

“There needs to be more attainable housing for young families and that will address the labour shortage,” Whiten said.

Ferguson said the skilled trades sector was the fast lane for prosperity for young people in Prince Edward County although the lack of local secondary school, graduates pursuing these careers was troubling.

“According to the 2018 Vital Signs report only 8.6 per cent go into the trades and this is a worry, The skilled trades provide the best opportunity for the creation of new full time jobs in the Prince Edward County economy,” Ferguson said, adding that in 2019 council will need to parter with multiple organizations and develop skills training and opportunity for potential skilled trades workers to bolster a an aging local workforce.

Residents wishing to hear more from candidates in the upcoming municipal election will have an opportunity to attend a number of debates taking place Thursday evening.

Bloomfield Town Hall will be the setting for a Bloomfield/Hallowell all candidates meeting starting at 7 p.m.

Finally, the The Picton Business Improvement Association will be holding an All- Candidates’ Meeting for the Picton Ward Thursday, Oct. 11 from 7pm-9pm at St. Andrew’s Presbyterian Church located at 31 King Street.

The six Picton Ward candidates will have an opportunity to introduce themselves, respond to two prepared questions from the BIA and then answer questions posed by members of the community.