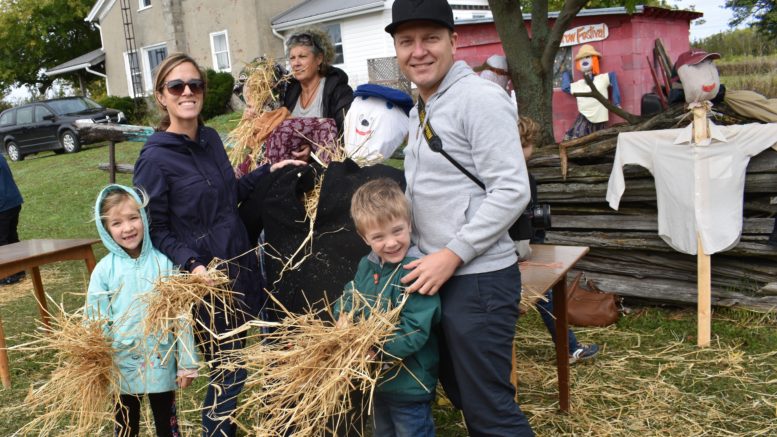 DON'T FORGET THE STUFFING- Crystal Emmets and Dominic Bochenski along with Mason Emmets-Bochenski and Mya Emmets-Bochenski take a break from creating a scarecrow at the eighth annual Scarecrow Festival at Smallpond Arts Centre on Sunday. The Toronto-based family was visiting Prince Edward County this holiday weekend. (Jason Parks/Gazette Staff)

If this weekend’s weather couldn’t scare people away from the annual Scarecrow Festival then it appears nothing will.

Over 400 people turned up at Smallpond Arts Centre on Clarke Road just south of Picton over the two day event now in its eighth year, cementing it as a prime Prince Edward County Thanksgiving distraction that’s on the grow. Organizer Krista Dalby said despite a rainy and overcast Saturday and blustery and almost chilly Sunday, attendance for the event was up over 35 per cent versus last year and the 2018 edition was the most popular if judging by volume.

“It was definitely our best one yet despite not having the best weather,” Dalby said.

Families from all over visiting Prince Edward County joined with locals and built scarecrows using a wooden cross and supplied straw and donated second hand clothes.

It wasn’t uncommon to hear families conversing en francais as well as others who were from all over the province of Ontario and were attempting to squeeze one more pre-winter long weekend in Prince Edward County.

“I think people are spending time with family on the Thanksgiving weekend and they need an activity to keep them out of trouble,” Dalby said with a laugh. It’s a fairly easygoing and affordable event to bring together an unlimited amount of family together and do something.”

Children were as happy to stuff a shirt with straw as toss the bedding material up into the air and wrestle with one another.

Tasty Food and drink were available through vendors and a walking path around the Smallpond grounds provided a popular hiking trail.

“Some people spent hours here wandering the paths, having a snack and building a scarecrow,” Dalby added.

The Scarecrow Festival supports next month’s Firelight Lantern Festival, a multi-generational march through Picton with a party at the Crystal Palace.

In the lead up to the November 10th event, participants are encouraged to attend one of 11 public workshops to create a paper and bamboo lantern. The sessions start this weekend and most are either free thanks to sponsorship from local recreation committees or a low cost suggested donation.

If the Scarecrow Festival is a must in October, the Firelight Lantern Festival is quickly becoming a mid-November romp of fun, dancing, art, puppetry and music.

“As that festival gets bigger and bigger each year, our biggest expense is artist fees,” Dalby explained.

A professional nine piece band will entertain at the Crystal Palace while professional artists will create installations inside the venue for one of the brightest and most exciting community parties anyone will ever experience.

The were ill a community band performing at the Benson Park muster point as well.

“We believe in paying our artists for their work and it’s the biggest expense we have,’ Dalby added.