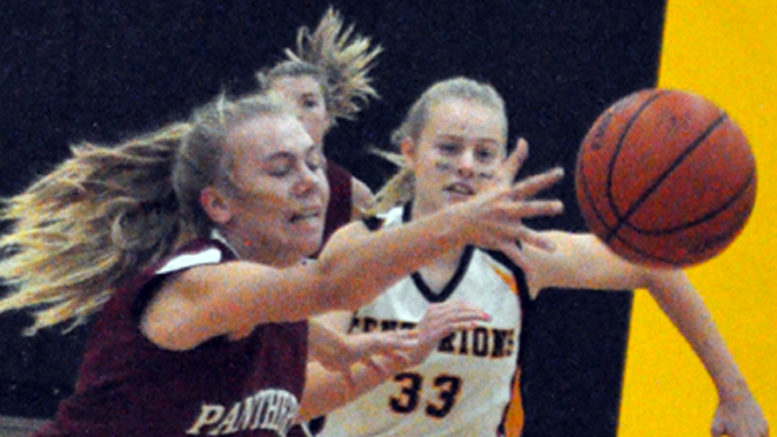 The PECI Junior Basketball Panthers walked into a hostile environment Friday morning and improved their record to 3-0 in Bay of Quinte Conference action.

Homecoming at Centre Hastings Secondary School meant a large, noisy crowd in the bleachers in Madoc for Friday morning’s tilt with the Centurions. The Panthers proved they were ready, however, starting with an 8-0 run and finishing with a 46-30 triumph.

Throughout the contest, the Panthers’ leaders came to play. Vanessa Wilton scored many of her 14 points in transition as she controlled the court in the first half. Later in the game, it was Hannah Goad’s turn to lead as she put up 10 of her 12 in the second half to quell a comeback from the Centurions, who seemed to rise to the pressure with stronger shooting after the break.

“I think our girls were a little surprised with how physical they were and they rebounded really well. We didn’t get the open looks like we’re used to,” he said. “It was great learning for our girls to have to battle and play. That’s the only way you’re going to get better.”

Leading by six at the half, the Panthers focused in and made more lay-ups after missing several early to put the game comfortably out of reach. Garden said their big three leaders offered energy.

“Gracie (Burris), Hannah and Vanessa do a lot of really good things out there. When they’re going, we’re going. We’ve got a lot of great supporting pieces around them too.”

Burris had eight points, Lauren Smith six, Emma Brady three, and Mary-Kate Wilton two in the win. Rebecca Clarke and Delaney Stoltz led the home side with six each.

On Thursday, the Panthers beat the Eastside Ravens 55-18 at home. Wilton led all scorers with 12 points. Following wins over Centre Hastings, Eastside, and East Northumberland, Garden said the Panthers are rounding into form nicely for the stretch run.

“Our juniors have a lot of experience. Most of them have played County Clippers. We’re further along in the strategy side of things. They have to get stronger and continue to work in individual skills, but overall this is one of the strongest junior teams we’ve had at this point in the season.”