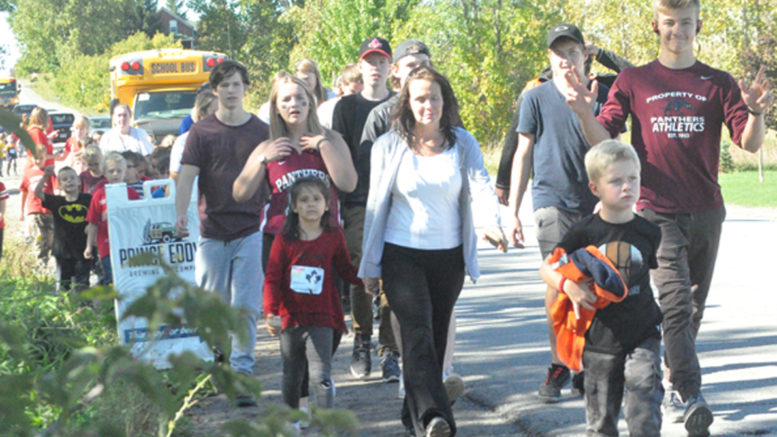 In first full-school activity, students and staff raise over $2,000

From Kindergarten students taking their first steps at school to victory lappers ready to venture into the big world, everyone at PECI was connected on a common journey last Thursday afternoon.

For the first time since the school became a K-12 facility, all the students and staff shared in one common event and they picked a good cause for the occasion, the annual Terry Fox Run.

Before a stream of people ventured across Johnson Street to the Millennium Trail, enterpreneurship class organizers encouraged their peers to raise as much as they could for cancer research.

There were regular messages on the morning announcements about the disease’s impacts and the students organized a cup system in classrooms to collect change. Most of the money was raised through traditional pledge forms however. There were also contests to encourage older students to get involved.

“The Grade 11 who raised the most money will receive a free parking pass next year, while the Grade 12 raising the most will get a free prom ticket,” said organizer Nolan Steen.

This year’s total was over $2,000, bringing PECI’s running tally to $40,000 in the past 15 years. There was also a bit of a buzz around the school about the impacts of that research in neutralizing the disease. Early in the school year, senior students clapped their peer Abby Heffernan into the school after she returned from her final treatment.

“It has affected us so I think more people were inclined to bring in money,” said organizer Madalynn Snider.

Added Steen: ”It makes us want to do a little bit more.”

Great weather on the day of the walk made the event run smoothly, according to Max Lindsay, who was also part of the team working out the logistics for the event.

Leading up to the big day was a challenge for the students, though, as they had to think about different aspects of the run to accommodate the younger participants. A shorter route was designed to ensure the elementary students didn’t tire on the course, while the older students saw an extended course than they were used to in previous years to ensure they weren’t running back into the crowd of younger students.

Organizer Myla DeBoef said it was worth all the changes to see everyone involved.

“We hadn’t really interacted as K-12s yet, so now we’re all working together and walking as one group. It doesn’t feel as divided,” she said. “It’s good for the community to come together for a common cause.”

Out on the path, it didn’t matter if it was a teacher, a parent, or a student of any age running. Those who were finished the task stayed along the course and offered high fives, keeping Fox’s spiring alive. It also wasn’t uncommon to see older students walking right beside their younger peers, encouraging them to keep going strong toward the finish line.

The PECI organizers also said they owed a debt of gratitude to local OPP officers and firefighters for traffic control and safety on the route.