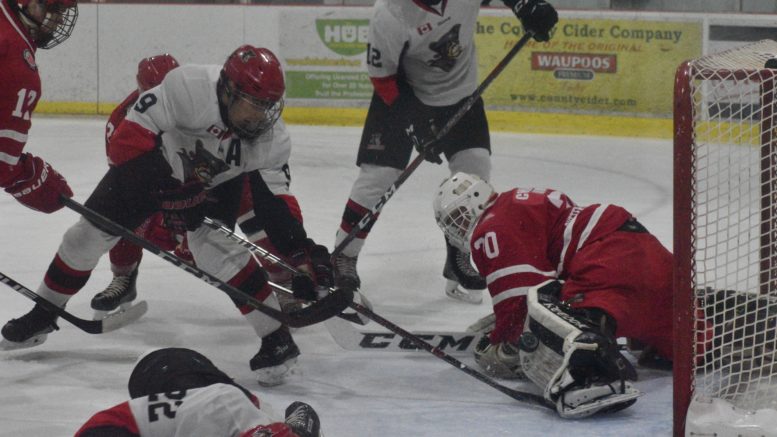 No one can accuse the Picton Pirates of being a one-trick pony this weekend as the club picked up three of a possible four points in a pair of inter-division contests.

Picton had ten different players tally over the two game set that saw the locals pick up a regulation tie in Uxbridge on Friday evening and then blast the visiting Little Britain Merchants 9-1 in a Sunday night home game. 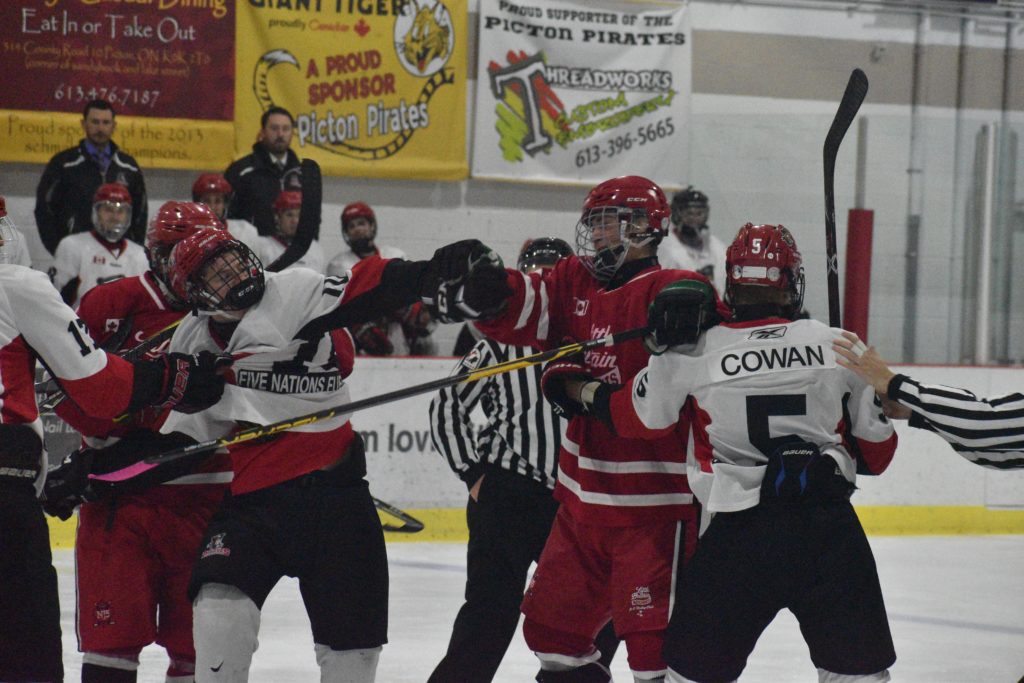 Players from the visiting Little Britain Merchants and the Picton Pirates mix it up during Sunday’s 9-1 win by the hosts. (Jason Parks/Gazette Staff)

Picton (5-3-1)had nine different players bulge the twine in a chippy affair that saw the teams combine for 16 minor penalties and six misconducts in the final period.

Pirates coach Tyler Green was happy to get out of the two game set against Orr division opponents with positive results.

“Tonight I was really happy with the team especially after they were so frustrated in Uxbridge,” Green said. “It was a great bounce back effort.”

And it came against a game Little Britain club who entered Sunday’s contest with a lone win but having played five of their first eight games to one goal margins.

But on this night, there was no stopping Picton.

Picton’s Noah Brant, Tristan Cowan, Landon McLellan, Matt Poole and Nate Boomhower all potted even strength goals over the first 40 minutes of the contest to build a 5-1 lead.

In the third, as the Merchants incurred penalty after penalty, chasing big hits and coming unglued, Picton ratcheted up the power play and scored four man advantage goals. 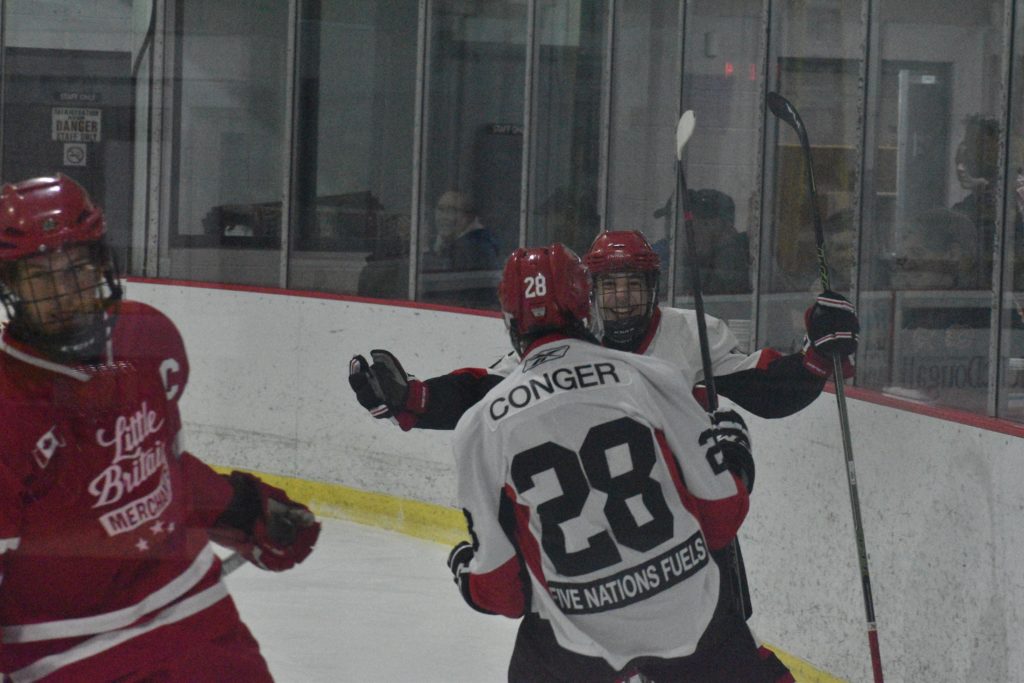 Justin Arnold, Devin Morrison, Jack Dow and Connor Kennedy all lit the lamp in the final stanza to finalize the score at 9-1.

Green said the Pirates bench staff implored the club to keep things simple in the third period, avoid the scrums and maintain focus.

Despite those pleas, there were a few dustups and Boomhower picked up a gross misconduct when this helmet came off when he and Merchant Mac West were trading salvos with under six minutes left.

Brennan Bush stopped 18 of 19 Little Britain shots on the night and could have played the last period in a barcalounger as the Merchants sent a paltry two volleys towards the Picton cage.

Dustyn Birkhof’s powerplay goal at the start of the second period was the flaw in Bush’s night in the Picton net.

Freshman blueliner Cooper Rogers picked up three helpers on the night to help co lead the Pirates points parade with Brant and Arnold also picking up three points a piece.

On Friday, Picton was in Uxbridge for their only visit of the regular season.

Within two points of first place in the Orr division, the Bruins were undefeated at home going into the game and stayed that way but the locals had to be happy to take a point out the game.

“It’s long bus ride and with the players having class or work to contend with on Friday, we struggled out of the gate to get out legs going,” Green said.

Picton was out shot 21-11 in the opening stanza but managed to escape with a 2-2 tie through 20 minutes.

Brant set up Matt Poole on the powerplay at 7:42 to stake the locals to a 1-0 lead but a momentum roller coaster about seven minutes later saw the Bruins pull even.

It only took the Bruins seven seconds to march down the ice and tie the game again as Buxcey victimized Picton starter Kyle McNair a second time at 16:50.

Picton would would have a gut check period in the third, down a goal to a tough, hard hitting Bruins squad.

Halfway through the frame it would be Picton’s biggest skater making an impact as Boomhower collected a McLellan feed and put the puck past Bruins starter Jacob Gordon to square the affair at 3-3.

“He definitely worked hard all weekend and was strong in both ends of the rink,” Green said of Boomhower. “I really liked his effort.”

The game remained tied until halfway through overtime when Justin Bennett beat McNair on an unassisted effort.

Picton’s goalie would stop 46 in the overtime loss and it was a bounce back effort for the Corbyville native who was lifted in his last start against the Lakefield Chiefs on Oct. 29 after surrendering five goals through 40 minutes.

“I was really happy with him on Friday, He’s been working hard to get better each day in practice,” Green added.

With nine games in the books, Picton will soon reach the quarter mark of the 2018-19 Provincial Junior Hockey Season and Green likes what he sees from the young club so far.

Still susceptible to bouts of wild momentum swings, this is a club that can skate and shoot well and has much budding potential.

But some of that emotion free wheeling style still needs to be harnessed if Picton is going to have success in the long run.

I like what we see, the first quarter was tough in terms of the schedule and the team has been put to the test and responded well,” Green said after Sunday’s game. “They’re showing character when they have suffered big losses by responding with a really good effort.”

Picton will host Port Hope on Thursday night before taking the road and playing Campbellford on Saturday and visiting Clarington on Sunday.

With just one win combined between the two teams, the Pirates need to be careful not to look past the Panthers and the Rebels before taking on the tough Eagles on Sunday.

“We need to keep pushing the pace, maintain the tempo,” Green said when asked if the club might be looking to rest some skaters in the next two games. “We have to keep the pedal down.”

On Board with the Pirates: Rogers, McLellan, Kennedy, Dow, Bush and Derek Vos were all selected to represent the club and the Tod Division at the annual PJHL Prospects showcase event in New Hamburg this weekend. The trio are taking part in the first game of the day at 10 a.m. And are expected to be in Picton’s lineup in Campbellford that night…Defenceman Kurtis Wood blocked a Lakefield shot in the late going of Sunday’s game and didn’t return to the ice after limping off but Green expected the veteran to be ok for this weekend’s action. Other than some bumps and bruises, the health of the club is good at this point of the season with the exception of veteran Matt Scott who has been hampered with both hamstring and back strains.