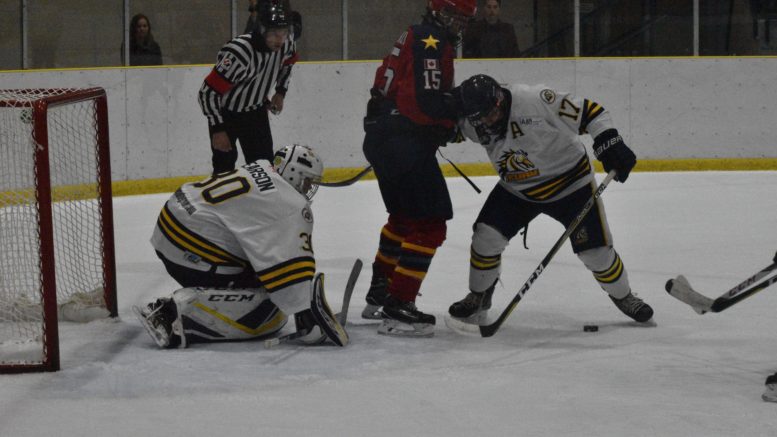 ALL EYES ON ME- Whitby Fury defenceman Amedeo Mastrangelli and netminder Luke Pearson keep an eye on the puck underneath the skates of Wellington Duke Andrew Rinaldi as OHA official Justin Kuipers looks on. Wellington was shut out on home ice by the visiting Fury 4-0 Friday. (Jason Parks/Gazette Staff)

The Wellington Dukes continue to take a ‘one step forward, two steps back’ approach to the 2018-19 Ontario Junior Hockey League season.

The club was in the driver’s seat on Thursday night in Newmarket, leading 3-1 in the third period only to see the Hurricanes come back with two goals in a 33 second span partway through the frame.

Wellington would salvage a point out of the regulation tie but it was Newmarket winning the game as Canes forward Adrian Nabuurs shed his check in the Wellington zone and was wide open to convert the Claudio Degasperis feed at 2:31 of the second overtime period to lift the hosts 4-3.

The next night in Wellington, the Dukes ran into a buzzsaw called the Whitby Fury and dropped a second consecutive lifeless contest on home ice, this time by a score of 4-0.

By virtue of their 17 points, Wellington (7-5-2) still appears to remain in the thick of the OJHL’s east division standings but the locals have played at least three more games than some of their fellow division mates.
In the case of Lindsay, Wellington had played a half dozen more games than the Muskies as of Monday morning.

Eventually, Wellington will need to start making some headway if they have any hope of successfully defending their OJHL east division crown.

Last weekend Wellington looked like they had turned a corner.

After sleep walking through a home loss to Cobourg on Oct. 5, the Dukes were a different team in road wins over Aurora and Toronto.

But more of that sluggish play crept into their game this weekend and cost the club at least one point.

“I know we have some guys that are new to the league and junior hockey at this level but 15 games in, you’d think there would be a little more consistency in their game at this point,” Druce said of the 4-3 setback in Newmarket Thursday night. “Some nights the opposing team puts pressure on and we can execute and keep the puck out of our net and then other nights we can’t.”

That was the case in the third period as Wellington had built a 3-1 lead.

Dukes defenceman Quinn Hanna had a powerplay goal in the first to stake Wellington to a 1-0 lead.

Just two minutes into the second, the Dukes got more production from their blueline as rookie defenceman Ben Roger joined the rush and pumped a Dalton Bancroft pass top shelf over Canes starter Mitchell Weeks for a 2-0 lead.

Former Wellington Duke Graeme McCrory came back to haunt his previous squad at the end of the period when he was able to skate to the front of the Wellington net and shoot a loose puck past Wellington starter Dannick Francouer at the 16:25 mark of the second.

Wellington was able to get that goal back early in the third when Bancroft failed to convert a partial breakaway but spotted Dan Panetta in front for a one timer from the slot to make it a 3-1 lead.

However, the worst lead in hockey came back to bite Wellington in the seventh minute.

A bouncing puck and some bad positioning eventually allowed Adam Trotman to break in on Francouer all alone and get to the contest to within a goal at the 7:04 mark.

A stunned Wellington squad was still shaking off the effects of the Trotman goal when Issac BoerHersh was able to pick a hole in Francouer and time the game just 33 seconds later.

Wellington would have a chance in second overtime as Elijah Gonsalves was interfered with on a breakaway attempt and was awarded a penalty shot by referee Kory Bannerman.

Gonsalves was able to beat Weeks but not the cross bar on the attempt.

“That’s a good team,” Druce said afterwards of Newmarket. They work hard and play at a high pace.”
For their part, Wellington did pump 46 shots at the Newmarket net and heavily out shot the hosts by nearly a 2-to-1 margin but Week was solid.

“It was tough to miss some of those chances and the frustration sets in and all of a sudden you look at the scoreboard at the end of the game and you’ve lost,” Druce added. A night later, Wellington couldn’t keep up with the Fury who managed put three past Dukes starter Olivier Lafreniere on just seven shots in the first period.

“They are a team that works hard for 60 minutes and (Whitby coach and fellow NHL alum) Rob Pearson’s come in and instilled that,” Druce said.

And it wasn’t just a Pearson behind the bench was pulling the right strings.

In the Whitby net, son Luke Pearson was thwarting any Wellington uprising an was spot on, stopping all 30 Dukes volleys for the first home ice shutout suffered by the Dukes since both squads played to a 0-0 draw in Wellington on Nov. 3, 2018.

Wellington will be looking to turn the tide on Friday night when they host Kingston for their first time this season.

Wellington then plays at the Westwood rink in Toronto in a rematch of the 2014 Dudley Hewitt Cup rematch with the Toronto Patriots and then host the Lindsay Muskies on Sunday afternoon.

The current inclination of the club was able to bounce back after a tough home loss as recently as two weeks ago and needs to show up with better effort and consistency to be taken seriously as an OJHL contender.

“I really thought we had turned the corner in terms of tough environments and hard hockey with those two road wins last weekend but it seemed like we were only half the team than we were the weekend before,” Druce added.

Leads at Lehigh: Forward Nick Abbott has been practicing with the club but hasn’t played since Sept. 30 and has reportedly asked for a trade. The Bonavista, NL native had seven points in nine games as a Duke…Dukes Defenceman Zach Uens has also been out action since the end of September with an upper body injury.