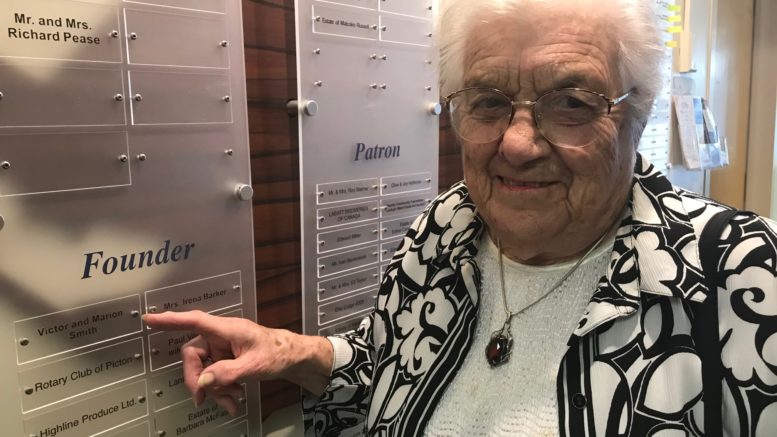 A LASTING LEGACY- Marion Smith points to her name plate on the donor wall erected by the Prince Edward County Memorial Hospital Foundation to honour those who have supported efforts to equip the facility with the latest medical equipment. (Submitted Photo)

It’s a tribute to the growing generosity and dedication of Prince Edward County residents, businesses and service clubs to our local hospital. 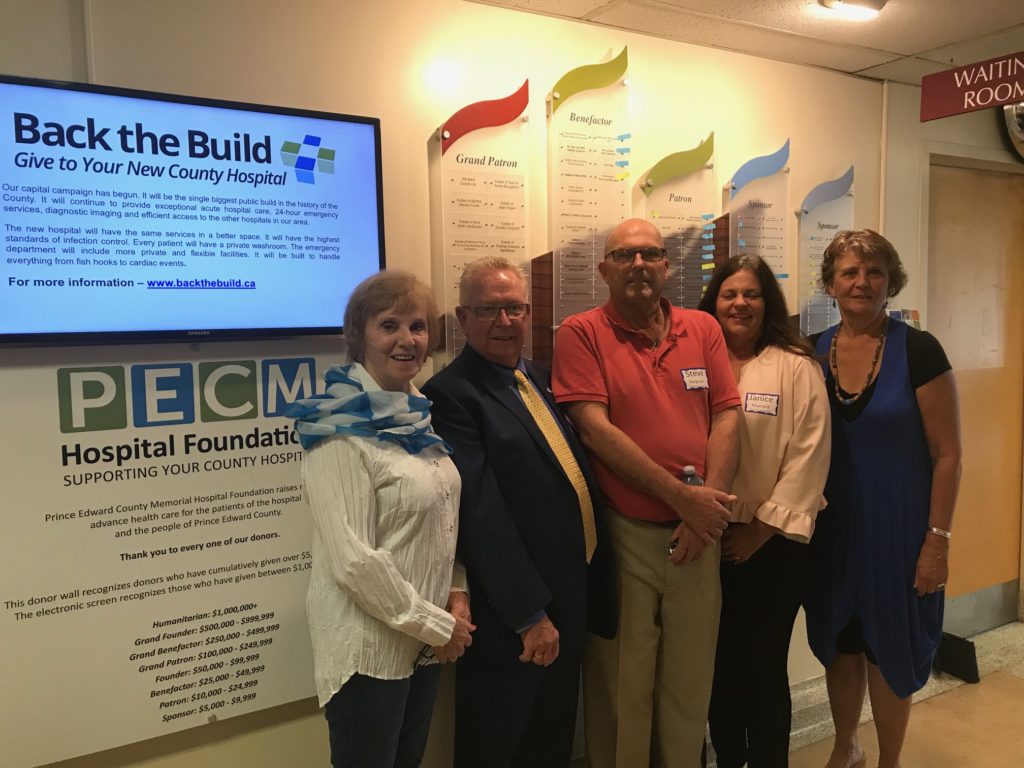 “The enduring and tireless support of our donors for Prince Edward County Memorial Hospital is inspiring.  Every year our donor family steps forward with gifts that makes it possible to replace critically needed medical equipment and this year’s donor wall update is exceptional.  I am honoured to be able to thank so many people who are being celebrated here today,” said Shannon Coull, the foundation’s executive director in front of dozens of PECMHF supporters gathered at the hospital

Wednesday’s reception celebrated new donors and those who have moved up a giving level. Fifty-six plaques were unveiled on the physical wall and 120 names added to the screen for a total of 176 additions – the Foundation’s biggest update since the wall was unveiled in 2011.

The wall, which pays homage to the geographic beauty of Prince Edward County, is a lasting way to say thank you to all donors who have given a total of $5,000 or more to the PECMHF. Donors who have cumulatively given between $1,000 and $4,999 since 1999 are recognized on the LED screen built into the wall.

Plaques may be in the names of individuals, families, service organizations or companies. Plaques may also be made in honour of an individual. The donor wall is a lasting legacy and expression of loyalty toward our county hospital, its staff and volunteers. 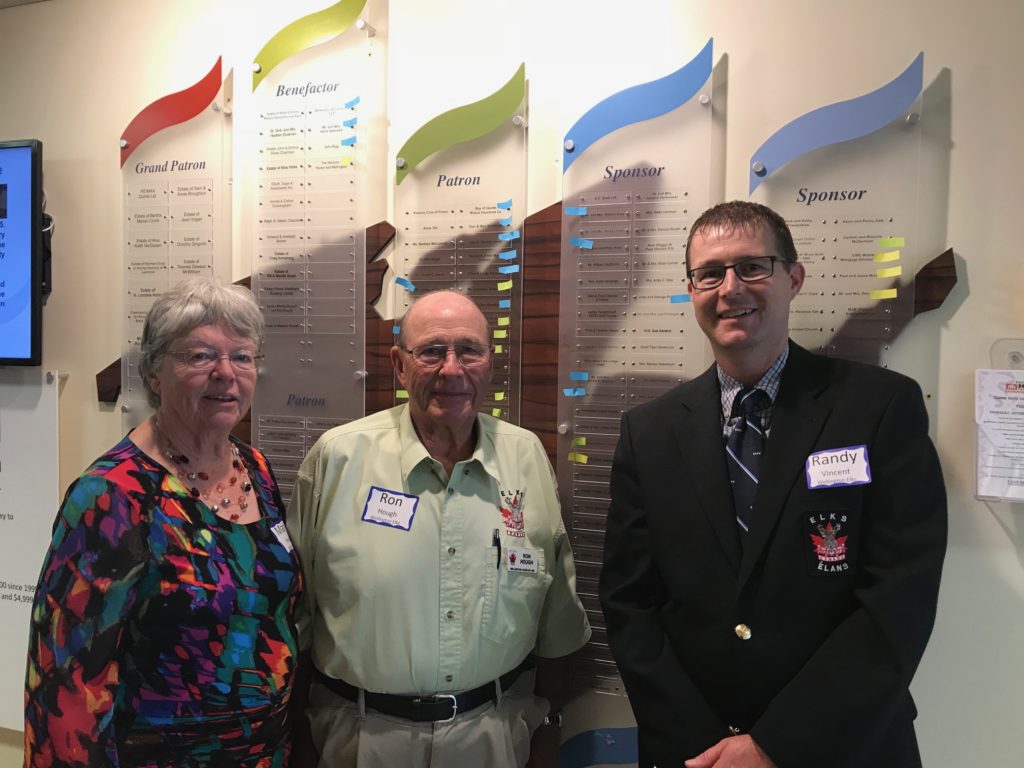 “Prince Edward County Memorial Hospital thrives with the support of countless county residents. While the donor wall and screen formally recognize and thank those who have reached $1,000 or more in cumulative giving, the Foundation is indebted to many more donors,” Coull added.

The municipality of Prince Edward County was honoured Wednesday for their cumulative gifts tallying $106,791 accelerating them to the Grand Patron level.

In one of his last public appearances as Mayor of Prince Edward County, Robert Quaiff spoke on behalf of the municipality, reiterating PECMH’s importance to the community as well as thanking the foundation for their continued efforts and taking time to note former Mayor and Foundation past chair Leo Finnegan for his continued support.

“This unveiling ceremony is an event that honours generous contributions,” Current Foundation Chair Monica Alyea said the unveiling event was a way for the organization to honour the very generous donations that support a vital need to keep PECMH operational and current in the advances of medical technology.

“This is also a celebration of the accomplishment of a community that works together to respond to the needs of our doctors, nurses and technologists for state-of-the-art equipment close to home in Prince Edward County,” Alyea said.

The Foundation continues to recognize the many individuals, corporations and community organizations that have been supporting our ongoing fundraising efforts that fund priority medical equipment purchases at PECMH and help get us closer to a new hospital in Prince Edward County.

Last year’s gifts from donors in the community were used to purchase equipment at PECMH through the Foundation’s ongoing fundraising activities. Equipment purchased for the County hospital included colonoscopes, gastroscopes, and updated heart monitoring equipment used in the Emergency Department. Fundraising also continues for the proposal to build a new hospital in PEC and Quinte Health Care expects to receive Stage Two approval from the Ministry of Health and Longterm Care in early 2019. 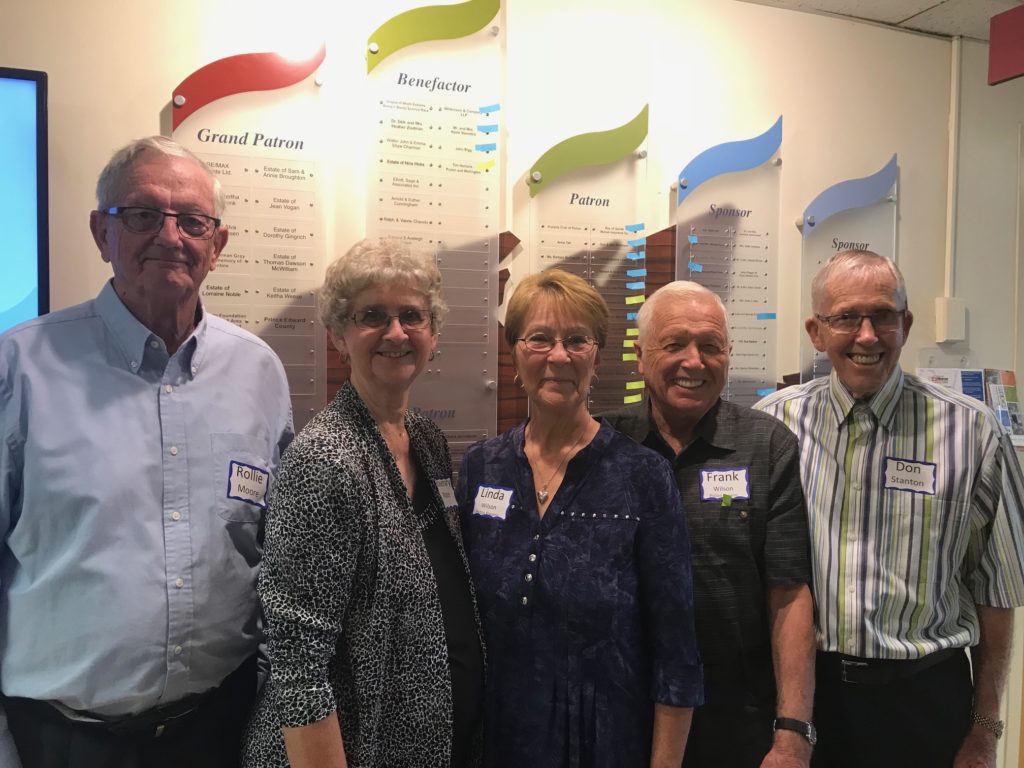 Coull added Medical equipment is expensive and has a short lifespan. Unlike many operating costs, equipment is not funded by the government; it is expected the community finances the replacement of medical equipment and building redevelopment through the work of hospital Foundations.

“This is why support from our donors is so important,” she said.

Of note, Tim Hortons (Picton and Wellington) upgraded their giving level from the Patron to Benefactor level for cumulative gifts now totalling $29,352.20 while the Wellington on the Lake Woodcrafters, CIBC Mobile Mortgage Advisors and the Wellington Elks Lodge are making a first time appearance on the wall alongside a plaque placed in memory of Charles and Effie Storms.

This plaque was donated by their daughter, Mildred (Storms) Fraser of Picton and is directed to the new hospital campaign.

“On behalf of the Board of Directors of the Prince Edward County Memorial Hospital Foundation, I would like to recognize the important contributions by so many that have led to today’s celebration,” added Alyea.