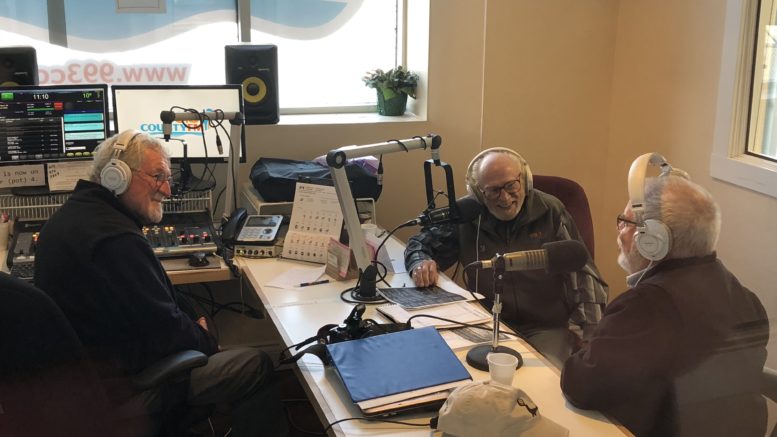 The little man with the big, warm smile in his voice took to the air on Sunday for one last time.

John Mather, a mainstay in the formative years of County 99.3 FM officiated his last ‘Music and Miscellany’ show on Sunday morning for the 208th and final time.

As long as there has been a community radio station in Prince Edward County, there’s been a wonderful program to tune into whether you were travelling down county roads or curling up with a warm beverage and enjoying what was left of the weekend.

Music from radio’s golden age, funny factoids, amusing and feel good stories and local information were all the ingredients of a great Prince Edward County Sunday morning and, like an expert chef loves to be in the kitchen, Mather was in his eminent position behind the microphone at the studios on Cold Storage Road as he entrained and informed.

Sunday was somewhat different however as Mather welcomed past and present station staff and volunteers and numerous long time listeners that stopped by to wish him well.

The spirit of the program will live on as Mather will still organize and produce a Music and Miscellany show but the announcer who got his start in western Ontario, was a Vietnam draft dodger after spending ten years in the United States and retired to Prince Edward County in the late 1980’s has earned a chance to sleep in on Sunday.

County FM General Manager Deb Simpson who organized Sunday’s drop-in at the station while the show aired lauded John for his efforts in making the station what it is today.

“It’s  an honour to know and work with John,” Simpson said. “His love and encyclopaedic knowledge of all things radio – from music to news to the farm reports- is entertaining and insightful. It’s what makes him shine on air. “

Mather generously shares his knowledge in the kind manner of a true gentleman and Simpson added Mather’s dedication to setting up the news department set the foundation for what the station is today.

“He has been and will continue to be an inspiration to myself and other staff and volunteers at the station,” Simpson said.

Fellow County FM colleague Terry Culbert who produced Music and Miscellany on Sunday said the diminutive man with the powerful radio voice has been huge presence for the station from day one.

Culbert, who hosts the Friday morning show at the station and has broadcast the same number of shows as Mather, was impressed with the man’s talent and ability.

“He has such a ‘good feeling’ radio show and even if you didn’t know him, you felt like you did and there can be no higher compliment for a radio personality in my opinion,” Culbert told the Gazette, adding he was amazed at the fans who turned up at the station to offer their heartiest congratulations to Mather and thank him for four years of wonderful entertainment. 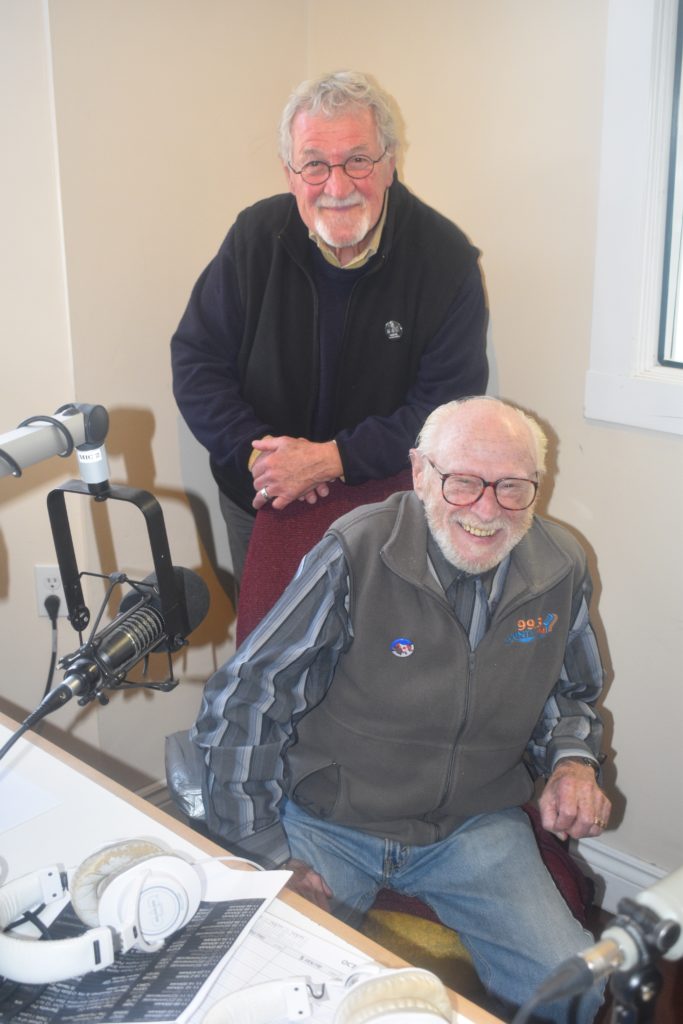 Ironically, both men attended Medway High School in Arva, Ontario at the same time in the 1950’s although they didn’t know each other at that time.

Mather and Culbert would take different career paths after graduating from one of Ontario’s top agricultural secondary schools where pig castration was part of the grade nine curriculum but both would wind up in the media business with Culbert working for Canwest Global as a television host and Mather working at a number of different radio stations in Ontario as well as the United States.

Amazingly, both would wind up at County 99.3.

“It was kind of terrific felling the day we realized we both went to the same high school all the way down in London and we would both wind up here in Prince Edward County,” Culbert said with a laugh.

It almost didn’t wind up that way however as Mather’s career took him to different locales in North America and placed him in Lakeland, Florida in 1968.

Mather explained to the Gazette that in order to secure a green card and move his family to the United States, he had to apply for a broadcast licence, sign a political waiver and enrol in the selective service.

“I had to swear on a bible that I would honour the United States and would serve the country in anyway I could,” Mather recalled.

With the military action in Southeast Asia growing, Mather had his draft number called even though he was approaching his 30’s and was supporting his wife and three children.

“At that point they were taking anyone they could get,” Mather said.

So what was to be done?

“I got back to Canada,” Mather said with a laugh. “I mean I had three children. I still have my draft card, I never burned it.”

After a rewarding career in radio where he specialized in news and agriculture in the Brantford area and was a billet parent to then-future NHLers Allan Bester and the late Bob Probert when they played for the defunct Alexanders, Mather retired to Prince Edward County in 1989.

“When I got here, I wondered why Prince Edward County didn’t have a radio station but it wasn’t meant to be…yet,” Mather said.

But the desire to be broadcasting over the air in Prince Edward County never really extinguished and Mather can vividly recall a meeting at the Blomfield Town Hall on Nov. 30, 2011.

“I had just lost my wife Elaine in September and I had always kept busy being involved with the food bank, hospital auxiliary and the arts council but what really kept me busy during that time was filling out application forms for the CRTC,” Mather said with a laugh. “It made me feel good because we were able to bring about something the County really needed.

The greatly diversified station has drawn praise from many for it’s unique and never tiring sound.

Mather looked back on the first four years of the station and said County 99.3 truly is a miracle realized.

“It’s been a lot of work with great number of volunteers and most are still with us today. The volunteer involvement and dedication has been out of this world,” Mather said. “Music and Miscellany and getting the station up and off the ground really filled up a void in my life and I felt if I have something to give that makes people happy and feel good then I’m going to give it.”