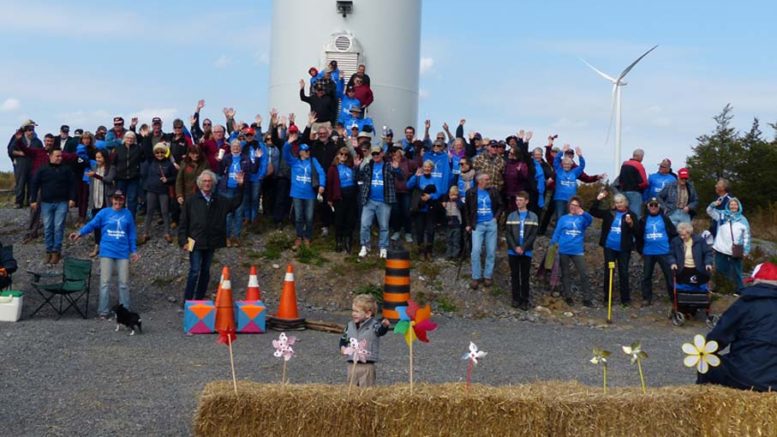 Organizers say more than 300 people passed below the blades of a behemoth Sunday for the Under Turbine Nine event on Jennifer Ackerman’s Athol property.

Ackerman told the Gazette those that trickled through her property Sunday were a “fantastic group of positive minded, environmentally concerned people” who took an opportunity to see an industrial wind turbine close up while learning about the technology or showing their support for renewable energy like the cancelled White Pines Wind Project that left four erected turbines along the south shore. She added she didn’t know several of the people who showed up.

According to Ackerman the event wasn’t a protest or a demonstration.

“It was an event to welcome anyone who had questions or who had been wanting to get close to a turbine for the first time,” she said. “Nobody would be turned away, no matter what their opinion of wind turbines in the county. Only a trouble maker would have been unwelcome and there were none.”

Ackerman also wished to dispel rumours that project proponent wpd contributed funding to the event, stating she paid for it herself. There was a donation jar on site and some $1,700 was given. There were three workers who had taken part in the project and all three appeared on behalf of Ackerman, who wanted them to answer technical questions that she couldn’t answer herself.

While local politicians like Mayor Robert Quaiff, MPP Todd Smith, and MP Neil Ellis were invited, Ackerman said that none of them were present. Had they been, she said she would have presented them with a copy of the petition to save White Pines, which has been signed by over 18,000 people and a local petition signed by 150 people at her store. Ackerman expressed disappointment they weren’t present.

She said those who were present had an opportunity to learn about the environmental work wpd Canada has undertaken to try to increase turtle population, protect bats, and provide hectares of wildflower habitat for butterflies, whip-pour-wills, and bobolinks within the county.

Children flew kites, visitors enjoyed refreshments, and people chatted in the sun and wind — two sources of energy renewables advocates believe could be capitalized upon.

“All in all, it was a truly encouraging experience and many thanks go out to all the volunteers and everyone who participated,” Ackerman said.