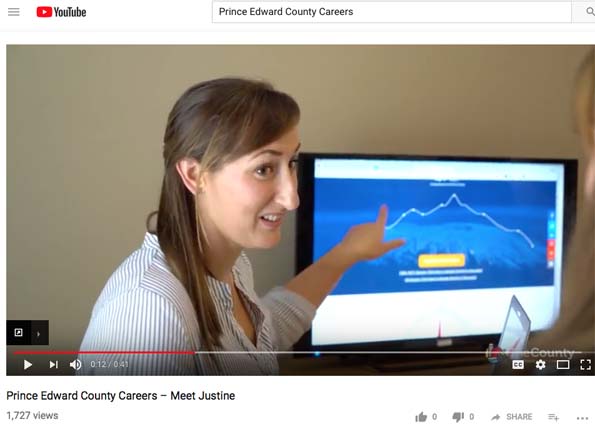 The County’s community and economic development coalition learned Monday afternoon how the municipality’s $5,000 investment in a digital workforce expansion campaign is working.

Community development co-ordinator Trevor Crowe told commissioners the campaign is one of a number of initiatives the County’s community development department has launched in concert with the County Workforce Partnership (CWP) to address a need employers expressed in business retention and expansion surveys conducted in 2016 and 2017.

Other initiatives supported by the CWP co-operation with Prince Edward Learning Centre, the Prince Edward County Chamber of Commerce, Career Edge, and Loyalist College include the Helping Employers Acquire Talent (HEAT) training program for the hospitality sector, job fairs, and extended collaboration with the college to meet the needs of local employers.

Crowe said that Career Edge currently has listings for 81 jobs, of which 59 are full time. Many are not seasonal jobs. Crowe also said 12 employers would hire more than one person, despite having a single job posting. In fact, one homebuilder would take on six-to-eight tradespeople himself.

The community development department set aside $5,000 in operating funds from its 2018 budget for a digital attraction campaign. With that money, it leveraged another $5,000 from the federal Eastern Ontario Development Program and another $10,000 from provincial Rural Economic Development Fund. With that $20,000 leveraged, the County was able to produce five 30-second videos and six second bumper ads showcasing success stories of people finding careers in the county.

According to Crowe, the County spent $10,000 on production, using a tender process to hire Double Barrel Studios, a production team that recently located in the county. It then spent the other half of its budget on digital marketing using a company called lionEater to target platforms like YouTube, Google AdWords, and Facebook. The spend targeted urban centres like Toronto, Ottawa, and Montreal and also the Quinte area itself in hopes of attracting skilled people to the area.

“We’re retargeting some of our existing tourism audience as well,” Crowe said. “We have over 30,000 followers on Instagram and social media. We’re recognizing these people are already fans of Prince Edward County and hoping we can get some engagement in that.”

Crowe said the goal of the campaign was to get 100,000 impressions on YouTube with a two-per-cent click rate, and sending over 2,100 engaged users to the County’s web site or Career Edge. Ideally about 100-200 people would inquire about jobs through Career Edge with an eye toward filling about half of those 59 full-time positions between September and December.

Commissioner Bill Roberts expressed congratulations on the way the department used the investment to gain other sources of funding.

“I wish my investment portfolio could quadruple the way you’ve quadrupled in leverage.”

Being about halfway through the campaign, Roberts asked for a status update.

Crowe said it has exceeded some of its benchmarks already with well over 200,000 impressions and 40,00 views on YouTube thus far. He also encouraged commissioners to share the videos.

It was also mentioned at the meeting that Crowe shared the campaign during a presentation at the Ontario East Municipal Conference as an example how a municipality could use key performance indicators to achieve its goals. He said he received positive comments from peers.

“A lot of municipalities have not implemented key performance indicators,” he said. “I think it was eye-opening for a lot of areas in eastern Ontario to know they can sue these technological tools to implement some of these to base decision making on the data and not so much guess work. That’s what we’re trying to achieve.”