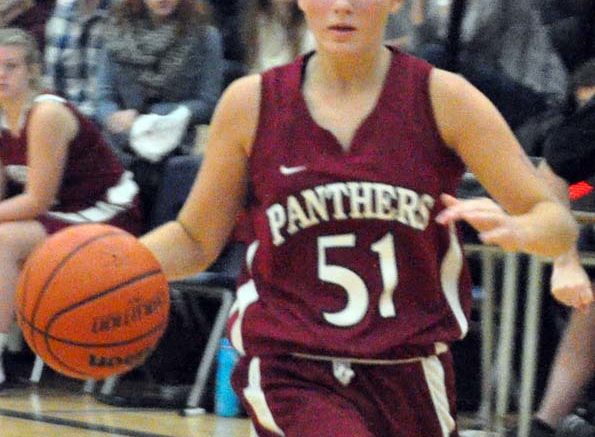 Playmaker- Grade 10 guard Hannah Goad has been a leader for the PECI Junior Basketball Panthers all season. She was a top scorer in both of the Panthers’ games this week. (Adam Bramburger/Gazette staff)

The PECI Junior Basketball Panthers continued their dominance in Bay of Quinte Conference plays with lopsided wins over Quinte Christian and Bayside over the past week.

At Quinte Christian on Thursday, the Panthers put up a 63-32 decision. Hannah Goad and Vanessa Wilton tied for the game high in scoring with 18 points a piece, outscoring the entire Eagles side.

Back at home Tuesday, the Panthers had little trouble with the Red Devils as they ran away with a 78-16 decision. Goad had 24 points and Wilton 23.

The Panthers improve to 5-0 and have outscored their opponents over the course of the regular season by a staggering 313-109. PECI will move into a tougher part of the schedule next week when they visit the St. Theresa Titans, who are also undefeated at press time. The defending champion Titans appear to have a stingy defence this season, allowing just 61 points through their first four contests. Their closest margin of victory was 34 points over the Nicholson Crusaders. Tip off is at 5:30 p.m. Tuesday.

The Panthers also have the Centennial Chargers and the Crusaders on their schedule and, traditionally, neither school has been a pushover.

In other PECI athletics news…

– After their first regular season loss in three seasons, the PECI Senior Basketball Panthers had a great bounce-back game against Bayside, a 65=39 win. Mikayla Leavitt led all scorers with an 18-point effort, while Jessie Swackhammer contributed 14 and Chloe Marshall, 12. Both Panthers teams will hit the court this weekend at the Crusader Classic in Belleville. It could be good preparation for the stretch drive for coach Rob Garden’s squad as they still have to see the host Crusaders, who are 5-0, as well as St. Theresa and Centennial. The 3-1  Panthers will tip off next at St. Theresa at 4 p.m. Tuesday.

– On the soccer pitch, the Panthers managed a sweep over the visiting St. Paul Falcons Thursday. The seniors won 4-1 on the strength of two goals by Alex Brady and singles by Ben Clarke and Gabe Goad. The juniors got a pair from Wyatt Slade and singles from Ross Maycock and Ben Persaud. Both teams had tougher luck this week. The seniors fell to Centennial 3-1 Monday. The juniors were blanked by Nicholson 2-0. The seniors lost to Centennial 3-1 with Goad scoring. At the end of the regular season, the seniors sit fourth at 4-3-1. The juniors are fifth at 2-3. Playoff schedules have yet to be posted.