Truth in the pleasant surprise of illusion.

That’s what Tom Wingfield (Adam McGowan) promises the audience as he narrates the story of his memories of life in Prince Edward Community Theatre’s production of the Tennessee Williams classic The Glass Menagerie, opening at Mt. Tabor Saturday.

The story he shares — his version of that truth, anyway — is one of contrasts and similarities. 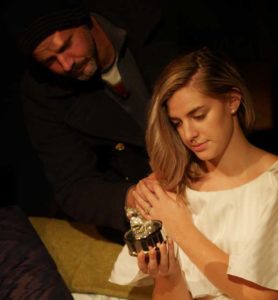 It details how the members of a family deserted by a father figure move to pick up the pieces and live their lives in tough economic times.

There’s Tom, who has had to work to support his family. He appears to function well, but longs for some sort of escape. Then, there’s his shy sister Laura (Kirsten Wight) who walks with a limp and doesn’t do well with the outside world. She creates a separate world for herself in glass figurines, including a favoured unicorn.

Director Lynn Fennell said the play is relatable in the development of the two young siblings. Laura feels confined by her impediment and is afraid to take risks. Tom is similar, shackled to his past and his mother’s needs and expectations for him to help the family. The difference is in their approach.

“He, unlike Laura, has the courage to branch out and make a life of his own. That’s a universally apt theme,” Fennell said. “When we look back to our 20s, life seemed ahead of us. We were the narrators. We create the narrative of our lives. We either risk making our dreams come true, or we fail at that. We see one who is willing to take the risk and one who is not.”

Their mother Amanda (Roxanne McKenzie) wishes for Tom to stay around until Laura gets established. During the second act, Tom brings an ambitious workplace friend, Jim O’Connor (Garrett Harvey), home and he is framed as a gentleman caller for Laura. Their interactions fill the stage with an air of hope. Fennell feels the actors really give the audience something to grasp onto.

“It’s a wonderful scene between two young people who are on very different ends of the spectrum on where their futures lie. Jim is up-and-coming, a progressive thinker. Laura is caught within her own self-imported isolation from the world.”

Audience members are left to see whether their hope produces a change in life’s trajectory or whether it was feeble. Fennell said he appreciates the energy Wight and Harvey, both bring to the company in their first time on the boards. “They’re young, inexperienced and keen. Think they’re very successful in their initial stab at the stage,” Fennell said of the county natives. Both McKenzie and McGowan return to the company, having performed in The Odd Couple (Female Version) and Veronica’s Room respectively in past seasons.

Fennell said he’s been hoping to produce The Glass Menagerie for some time. He’d previously appeared in Williams’ other famous work, A Streetcar Named Desire, and found the American playwright’s work very powerful. He said Williams reaches into the fundamentals of human relationships to show passion behind the surface, variety of colours of life and differing relationship dynamics.

“This (play) was of a manageable size and scope and it still addresses those areas and issues Williams was so adept at portraying.”

The performance is somewhat challenging technically as Williams went to great lengths to describe how the play should be set. Fennell said he calls for “industrialized society in the brink of chaos.” Added wrinkles include the use of the soundtrack from the original 1944 production and some other technical treatments PECT hasn’t tried before.

“It’s a little ambitious in that regard, but it’s only meant to embellish the performance on stage, not to replace it or distract from it,” he said.

“It’s drama with some humorous moments in there. Williams doesn’t ignore the humour in human dynamics. It is different than other plays we’ve done, it certainly isn’t lighthearted comedy. I’m excited about producing it and I hope we have an appreciative audience. It’s an opportunity to see a classic American play that won’t be by again in this area.”

In addition to being PECT’s opening piece for its 11th season, it is also the company’s entry in this year’s Eastern Ontario Drama League Festival. In the final curtain of a five-show run, an adjudicator will visit and judge the show against nine other performances across the region. The winning entry will perform at a Theatre Ontario festival come May.

The Glass Menagerie runs at Mt. Tabor Oct. 20, 26, and 27 at 7:30 p.m. and Oct. 21 and 28 at 2 p.m. Tickets are $17 in advance, available at Books & Company, the SideStreet Gallery, or via e-mail at saveallbonnie@gmail.com. Group tickets for eight people or more can be reserved for $12 each through e-mail. Tickets at the door increase to $20. Season subscriptions are also available with one price for three performances. Also scheduled this year are Sean Grennan’s Making God Laugh in March and Rob Urbinati’s Death By Design: A Comedy with Songs and Murder in May.