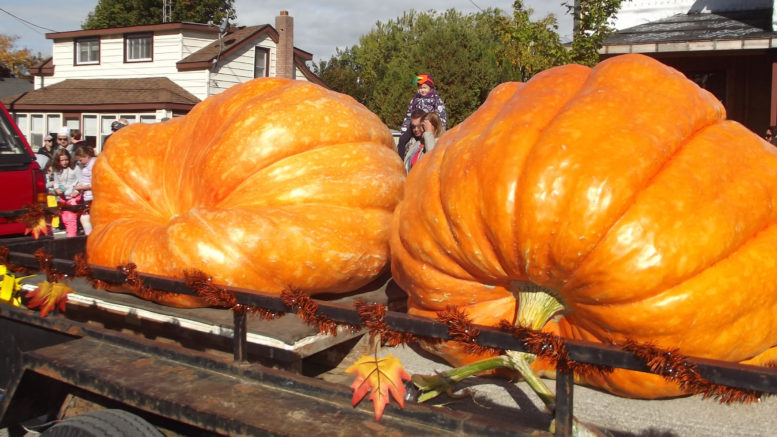 With tons and tons of pumpkins on display, Wellington became Pumpkin City on Saturday, Oct. 13. Even the crowds of people were dressed in pumpkin hats or even full pumpkin costumes. 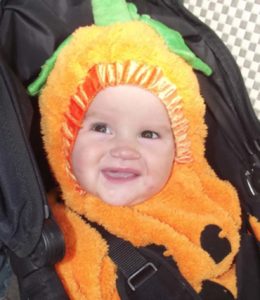 In the spirit of the season – Eleven-month-old Simone Peloso of Wellington was one of the cutest pumpkins taking part in Wellington’s Pumpkinfest on Saturday, Oct. 13. (Terry McNamee/For The Gazette)

Before the serious business of judging pumpkins and other giant crops got underway, crowds lined Wellington’s main drag to watch the Prince Edward County Pumpkinfest parade, which included everything from clowns, musicians, Halloween-themed floats, horses, antique tractors, vintage vehicles and musicians to, of course, pumpkins galore.

There were vendors selling food, crafts, books and pumpkin hats, a petting zoo, pumpkin-themed games and much more, but the chief attraction was the lineup of splendid giant pumpkins in every possible pumpkin colour: brilliant orange, yellow, white and green.

John Vincent of the Prince Edward County Pumpkin Growers Association, which runs the event, said Wellington’s pumpkin competition attracted some excellent entries because of its timing.

“This is the last weigh-off in the world,” he said. “You can only weigh them once. They start losing weight as soon as they’re picked because they are mostly water. Being the last weigh-off, we always get some pumpkins the others don’t get. People leave them growing until the last minute.”

Vincent said this was the 22nd annual Pumpkinfest.

“Bill Greer, the founder of the event, grew the first 1,000-pound pumpkin in the world right here in the county,” said Vincent, who organizes Pumpkinfest with Bill’s son John Greer.

Vincent explained that there are two kinds of pumpkins and that they are not related to each other. The ordinary pumpkin is the field pumpkin, the kind people buy for making jack o’lanterns or baked goods. There are competitions for those, too, but Pumpkinfest’s main focus is the Atlantic Giant, a type of seed bred by Canadian Howard Dill. This giant squash has been weighted in at well over 2,000 pounds in the USA and Europe. in Canada, where certain chemical growth agents used elsewhere are prohibited, the current record of 1,959 pounds was set at the Woodbridge Fall Fair on Oct. 6, just one week before the Wellington weigh-in. But Vincent said it is just a matter of time before a Canadian-grown giant pumpkin breaks the 2,000-pound mark.

With more than 20 giant pumpkins entered for competition or exhibition, including some of the biggest grown in Ontario and Quebec this year, organizers had hoped to take a run at the Canadian record, but even the biggest came up a bit short. The heaviest weighed in Wellington this year was Quebec resident Harley Sproule’s entry, which stopped the scale at 1,761 pounds. 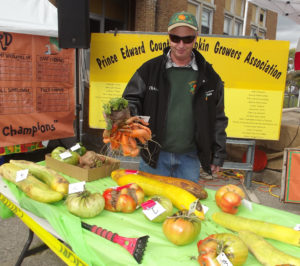 The authority – Chris Lyons was the official judge for all categories of giant vegetables from carrots and tomatoes to watermelons and giant pumpkins during the 22nd annual Wellington Pumpkinfest on Saturday, Oct. 13. (Terry McNamee/For The Gazette)

The winner of the Bill Greer Memorial Prize for heaviest pumpkin grown in Prince Edward County was Shannon Desjardins of Picton, whose giant reached 1,170 pounds, good enough for sixth place overall. The Howard Dill Award for the nicest looking pumpkin over 600 lbs. went to Dan Langridge of Picton with a pumpkin weighing 1,138.5 pounds, putting it in eighth place overall.

The heaviest pumpkin grown by a 4-H member was the 919.5-lb entry of 11-year-old Carter Black of Ameliasburgh. It also placed 13th overall. Carter had a great day, winning first place for heaviest watermelon (200.5 pounds), first with his 58-pound rutabaga and first place in the heaviest bushel gourd class with a 240-lb entry.

His other awards included third place for heaviest cabbage (33 pounds), fourth place with his 453.5-lb squash and seventh place with a 1.78-lb tomato.

Another Quebec grower, Todd Kline of Shawville, captured top prize in the field pumpkin competition with an entry weighing an even 100 lbs.

A complete list of all the award winners from the 2018 competition can be found on Facebook by searching Prince Edward County Pumpkinfest.