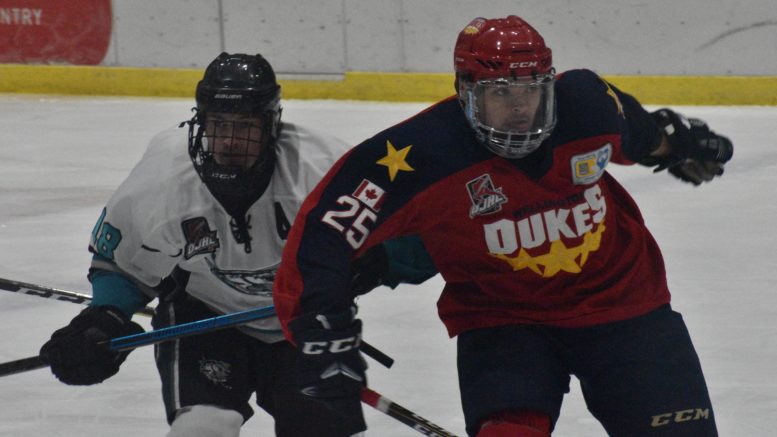 The Wellington Dukes saw their record fall to the .500 mark this weekend as the club struggles to maintain any level of consistency in its game.

Wellington bombed the Kingston Voyageurs on Friday night at home 11-5 ,but would have liked to save some of that offence as the locals were shaded in back-to-back one-goal games to put their mark at 1-2-0 over the weekend.

On Saturday in Toronto, a third-period goal by Dante Spagnuolo was the difference as the host Patriots shaded the Dukes 4-3.

On Sunday at Lehigh Arena, the Dukes spotted the visiting Lindsay Muskies a 3-0 lead in the opening period and were never able to complete the comeback, falling 6-5 to the fish.

With the losing weekend, the Dukes fell to fourth spot in the OJHL’s East Division, four points behind first-place Cobourg who have four games in hand on Wellington.

After the Vees built a 3-2 through the opening 20 minutes and Kingston’s Brandon D’Agostino potted his second of the game at the 2:14 mark of the second to make it 4-2 for the visitors, Wellington went on a eight goal rampage.

Elijah Gonsalves and Andrew Rinaldi each added their second goals of the game to push the Dukes back to even at 4-4.

Tim Fallowfield would make it a 5-4 game with Wellington’s third powerplay marker of the night at the 12:37 mark of the second and then a successful Rinaldi penalty shot with just 15 seconds left in the second made it a 6-4 spread in favour of the Dukes.

In third, newly acquired Dylan Massie picked up his first goal as a Duke at the 46 seconds mark.

Goals by Brett Humberstone, Jacob Vreugdenhill and Modoka Suzuki pushed the score to 10-4 before Adam Kim scored to get Kingston back to to 10-5.
Wellington’s Dawson Ellis would salt the game away in the late stages, scoring his second of the season.

On Saturday, Ellis would pick up another goal halfway through the second period to bring Wellington into a 3-3 tie with the host Patriots.

With over half the game left, it would have been a good bet there would be more than a lone goal scored but a single tally by Spagnuolo 30 seconds into the third beat Wellington starter Olivier Lafreniere and Wellington lost by a count of 4-3.

Gonsalves and Adam Usinger had a pair of goals for Wellington through the opening 16 minutes, but a Cole Burtch goal cut the Dukes lead in half.

On Sunday, Wellington’s Dannick Francouer had a rough outing, giving up three goals on 16 shots as the Muskies built a 3-0 lead through the opening 20 minutes.

One might have sensed it wouldn’t be Wellington’s day when the Dukes failed to connect on a lengthy five-on-three man advantage near the end of the frame only to have Lindsay’s Patrick Goan march down the ice and score to make it 3-0 Muskies.

In the second, Massie would get his second as a Duke thanks to Frank Vitucci’s pass just 52 seconds in but any thought of a Wellington comeback was snuffed out in quick succession Joey Campbell and Curtis Trolley scored on back-to-back shifts under a minute after Wellington’s goal to make it 5-1 Lindsay.

Down 6-2 going into the third thanks to a Ben Woodhouse goal, Wellington would score three in the frame to make it close.

Vreugdenhil, Gonsalves and Rinaldi all scored and Wellington was able to lift Lafreniere for an extra attacker but the Muskies held firm to pick up their fourth win of the season.

Wellington heads into Trenton on Friday night before travelling to Lindsay on Sunday.

The Dukes are in Cobourg on Monday.