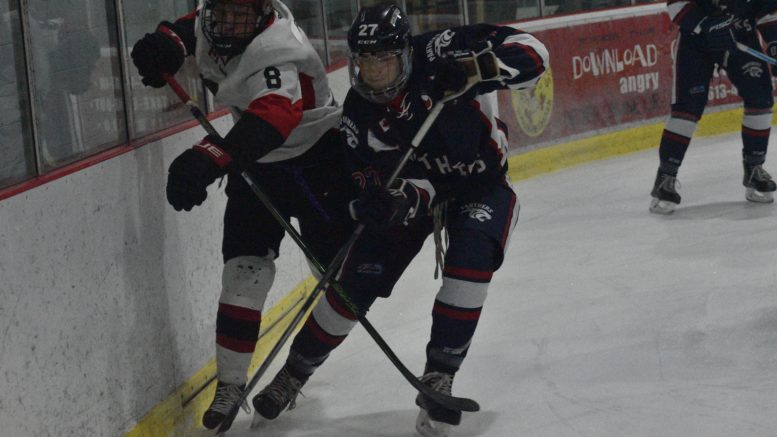 If the goal for the Picton Pirates was to take two out of three games in an action packed weekend that included PJHL regular season play and a third of the team playing in the league’s annual prospect showcase, it was mission accomplished.

So why were the Pirates kicking themselves somewhat on Monday morning?

The answer came at the end of Thursday’s home game when the locals found themselves on the losing end of a 3-2 hockey game to the visiting Port Hope Panthers, a club that had just registered its second win of the season at the expense of the host Pirates.

Picton would rebound nicely with a dominating 8-1 win in Campbellford Saturday night and then a gutty 5-3 victory over the host Clarington Eagles on Sunday afternoon.

Had Picton (7-4-1) run the table this weekend, they would only trail league-leading Napanee by two points instead of four when they woke up on Ontario’s municipal election day.

But when you remember this Picton squad is still young with over half the roster not having played junior hockey, you start to realize there will be bumps along the way and losing home games you should win are one of those bumps.

Picton Pirates coach Tyler Green was stressing that fact despite not having many answers for Thursday night’s loss.

“I’m still looking for one if you have it,” Green said with a chuckle when to offer a reason why his club was so flat in the contest against the Panthers. “We know we are going to have issues with consistency with a younger team and Thursday night was a great example of it.”

Picton was coming off an emotionally draining and hard-nosed home win over the Little Britain Merchants on Sunday when everything they did was winding up in the visitors’ net.

Green said his players showed up to the rink in a comfortable state of mind on Thursday and forgot to go to work.

“It really boils down to consistency,” Green said.

The Pirates were able to strike first thanks to a Tye Eaton power-play goal part way through the first period, but the Panthers struck on a man advantage of their own when Tyler Thompson was able to beat Picton starter Kyle McNair at 13:22.

The Panthers had the only goal in the second in a period that featured the two teams combining for only 11 shots on goal.

Mathew Henderson’s goal at the 9:37 mark staked Port Hope to a 2-1 lead through what was largely 40 forgettable minutes for Picton.

The Pirates evening things up in the third period with Logan White collecting a Connor Kennedy feed and beating Port Hope starter Ethan Robertson just 2:40 into the final frame.

That tie lasted until the 12th minute of the third when the Panthers moved ahead to stay on Carson Shuttleworth goal that made it 3-2.

Picton lifted McNair and out shot the Panthers 15-6 in the third but the Pirates, who lacked edge all night, were unable to beat Robertson a third time.

On Saturday after more than  a half-dozen Pirates represented the club, skating for theTod Division at the PJHL prospects event in New Hamburg earlier in the day, Picton got back to basics in Campbellford scoring three unanswered goals in the first period en route to an 8-1 win.

“The message was back to keeping simple and working together and in the system,” Green said. “It was an important game for us to bounce back, forget the past and keep moving forward.” 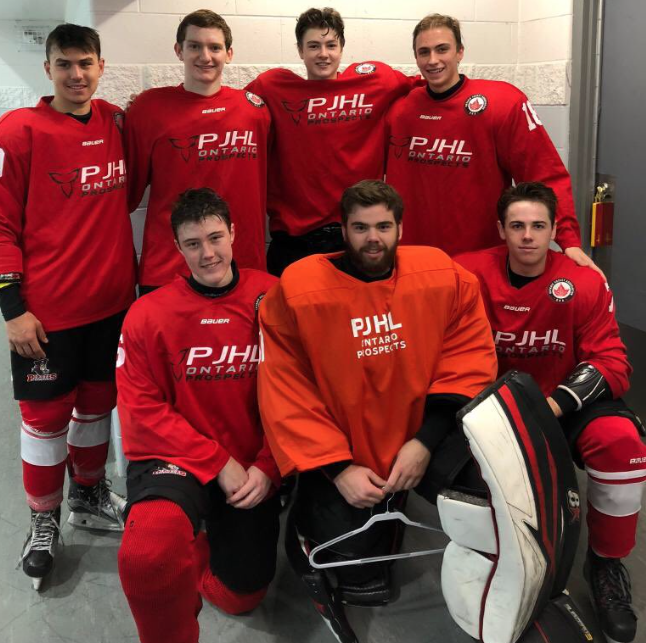 On Sunday with a short rest and not knowing what to expect, Picton went into Clarington and gave up an early goal to the Eagles at the 3:46 mark of the first.

Then, the Pirates decided to turn their fortunes around and take it to the Eagles.

“They were awesome,” Green said of his squad. “Sunday was best I’ve seen all four lines play, we definitely out worked the opponent and held most of the play.”

Afforded a power play at the 4:02 mark, Picton struck off the face-off as Conger bagged a power-play goal at 4:06.

Just 59 seconds later, it was Morrison feeding Poole to stake the Pirates to a lead they would never relinquish.

Morrison picked up his third helper of the game on Picton’s third goal, a strike from Noah Brant at the 13:03 mark to put the Pirates in the driver’s seat at 3-1.

Clarington would close the gap to 3-2 later in the frame but the Pirates got some production from the checking lines in the second when Dow cashed in with his third of the campaign and potted the eventual game winner.

Conger would score another power-play goal at 11:27 of the second to push Picton ahead 5-2.

Clarington forward Evan Barr would get the hosts back in the game at the end of the frame but Brennan Bush, fresh off his shutout performance at the PJHL showcase a day earlier, was spot on stopping all 13 Eagles volleys in the final stanza and preserved the 5-3 victory.

So, at the end of the weekend, Picton loses a game they were probably counting towards the win total and wins a clutch road game they might have been given a pass on considering it was an inter-division matchup less than 24 hours after playing in Campbellford the night prior.

All par for the course for a young junior hockey team feeling its oats and finding its way in the PJHL.

“I think we still are pretty happy with then progress over all at this point and if we are going to have these learning experiences like we did Thursday, I’d rather have them this early in the season,” Green said.

The Pirates will have a chance to demonstrate their knowledge base on Thursday night as they welcome the winless Campbellford Rebels to Huff Estates Arena in the club’s only action this week.

On Board with the Pirates: Picton contributed the only goal for the Tod Division in a 2-1 loss to their Yeck Division counterparts from the London, Ont.  area Saturday morning. White scored with Landon McLellan and Dow assisting. Bush stopped all 11 shots he faced and McLellan was selected his club’s most valuable player — the second straight year a Pirate won the honour…With seven goals and seven assists, Conger has taken over the lead in Pirates scoring…Matthew Scott returned to the lineup Saturday night after missing three games with an upper body injury.