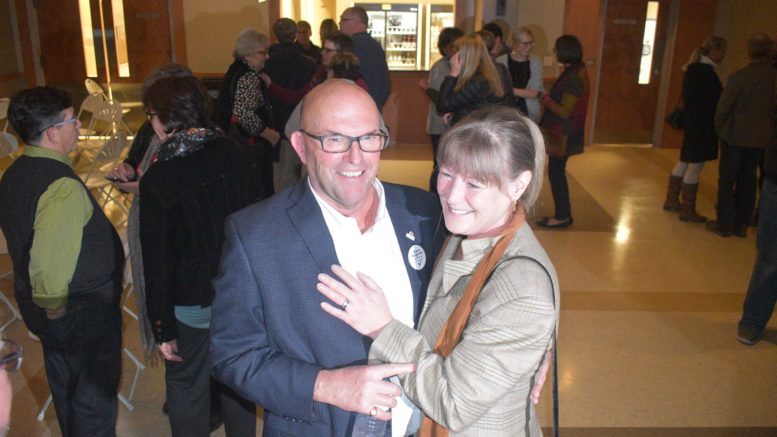 Voters in Prince Edward County had their say and a new municipal government was elected Monday evening.

While it wasn’t exactly a full scale turnover in the local edition of the 2018 Ontario municipal election, there are going to be some fresh faces around the horseshoe come December.

After incumbent Mayor Robert Quaiff chose not to seek reelection there was always going to be a new head of Prince Edward County government and the electorate chose Milford’s Steve Ferguson to lead council and be the face of the municipality for the next four years. 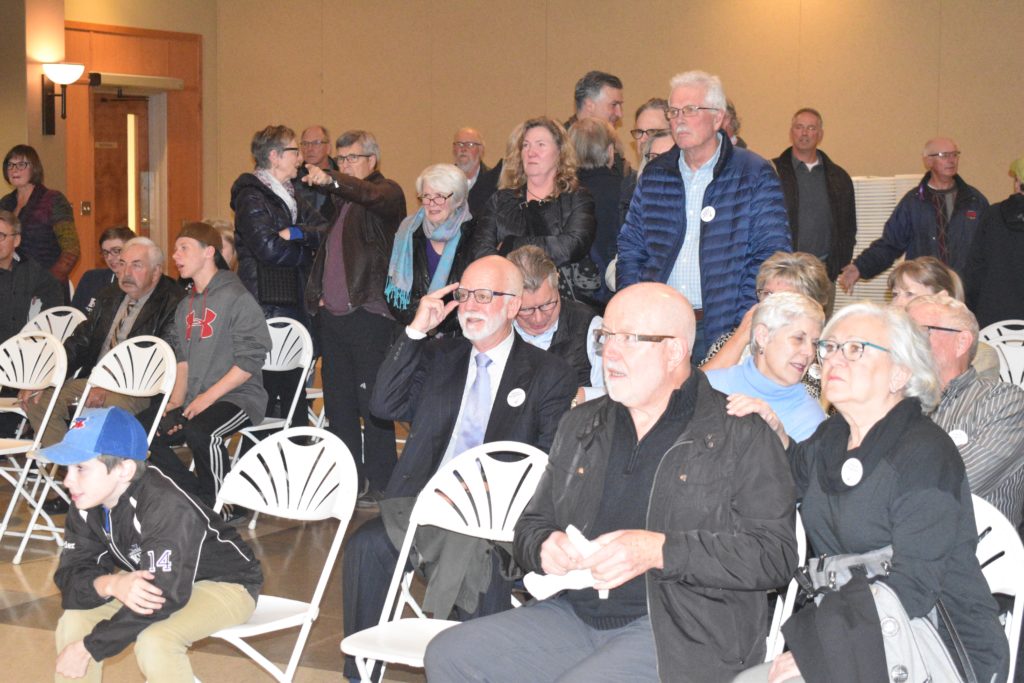 Newcomer Richard Whiten followed up in third place with 904 votes.

For the most part, election day in Prince Edward County ran smoothly however the Internet functionality of the Intvoting web site which also hosted a number of other municipalities’ elections was lagging on Monday and an extra hour was granted to ensure all online voters were able to cast their ballot electronically.

Once the dust  settled and the votes were counted just after 10 p.m., Ferguson emerged as the choice to wear the municipal chain of office for the the next four years.

Ferguson told the Gazette at the 2018 results event hosted by the municipality at Highline Hall in Wellington he was feeling emotions of great pride, humility and appreciation once it became clear he would be the one to lead county council in the upcoming term.

“I have a great appreciation for the voters of Prince Edward County, I’m stunned. 30 years ago I arrived in this municipality as a tourist and if someone had suggested to me that in three decades in 2018 ‘You are going to be elected as mayor,’ I would have said ‘Get out of here, that will never happen’,” Ferguson said.

The mayor-elect doesn’t think there be drastic learning curve for this council and was looking forward to setting up meetings with every councillor that would be carrying the concerns of their ward to Shire Hall-be they newcomers or incumbents.

Ferguson said he and councillors will sit down, get to know each other, and define the priorities facing the municipality prior to Dec. 1.

All incoming members will be getting a six-inch thick binder in order to be prepared for the 2019 County budget exercise just prior to Christmas and  council will also have to deal with the cannabis legislation and determine if they want to opt in or opt out of allowing retail sales of recreational marijuana as well as the licencing portion of the municipal short-term accommodations bylaw and official plan amendment.

“It will be a pretty packed couple of months in early 2019,”Ferguson said.

And there won’t exactly be a lot of municipal experience to lean on.

In total, six current councillors including Roy Pennell, Steve Graham, David Harrison, Jim Dunlop, Barry Turpin and Gord Fox were unable to get traction with the voters in their respective wards and will be on the outside looking in at Shire Hall when the new council is installed in December.

Overall, only three incumbents will have a seat on council when the new term commences.

In Picton, newcomer Kate MacNaughton outpolled all candidates with 723 votes while Phil St. Jean (633) finally booked a return trip back to a very different Shire Hall than it was when he was a councillor representing Bloomfield at the turn of the century.

In the newly amalgamated Bloomfield/Hallowell ward, Gilead Road dairy farmer Phil Prinzen led the polls in Ward 2 with 1162 votes while incumbent Brad Nieman managed to stave off the rest of the field and get elected with 802 votes.

In Ward 3, the longtime Wellington councillor Jim Dunlop faced defeat for the first time since an unsuccessful mayoral bid in the early 2000s.  Mike Harper will represent the village after outperforming the field with 822 votes.

Ameliasburgh saw some turnover but the constituents in Ward 4 saw fit to re-elect Janice Maynard for a third term with 907 votes.

Newcomers Bill MacMahon (764) and Andreas Bolik (742) were also elected to council from the northern ward.

In Athol, incumbent Jamie Forrester received a solid endorsement from Ward 5 constituents as he cruised to a win with 321 votes which was nearly 50 per cent of the votes cast.

In Hillier, newcomer Ernie Margetson was the poll leader for Ward 8 with nearly 75 per cent of the vote, the largest winning percentage of any race in Prince Edward County.

In two of the smaller wards by population, the late arriving Internet vote played a hand in some dramatic jockeying.

Incumbent David Harrison had taken a lead on challenger Stewart Bailey but Bailey was able to pull ahead of Harrison by a count of 399 to 349 when the final tabulations were counted for North Marysburgh. 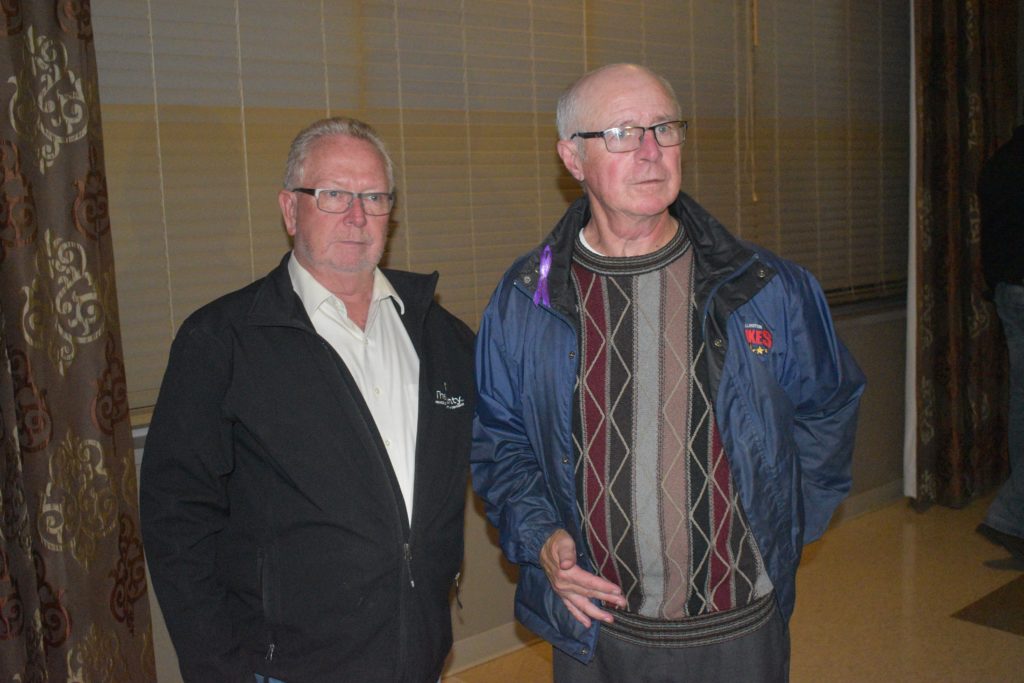 In South Marysburgh, John Hirsch and Elis Ziegler ran neck- and-neck until the final update when Hirsch was finally able to pull ahead in Ward 9 207 to 174.

Finally, Alison Kelly was able to unseat incumbent school board trustee Dwayne Inch in the battle to represent voters and parents of school children in Prince Edward south at the Hastings and Prince Edward District School Board.

Scanning all the changes that will be coming to Shire Hall in December, Quaiff said he was hopeful that some of the rare experienced hands could help lead but also excited about some of the newcomers that will being fresh ideas to the horseshoe

“Steve is going to do a great job and Dianne would have done a great job as well. I’m excited that we have a different council going forward and I hope they will reach out and ask those experienced councillors and perhaps myself for direction and some advice. I’m really looking positively on this next council,” Quaiff told the Gazette.

With just a few more meetings in November left for the current council, Quaiff is among those that will be counting down the trips up the stairs at Shire Hall and into the iconic council chamber.

“I’ve had 17 years combined service in municipal politics and I’m really grateful for the opportunity to serve the residents of Prince Edward County. I hope people have appreciated that because I’ve only taken this on because I love the County and wanted to serve it as a people person just like my father was. I’m really going to miss it,” he added.

In terms of total ballots cast in 2018, Prince Edward County saw a slight uptick in municipal engagement in 2018 over 2014 with just over 300 more ballots cast this year than four years ago.

Monday’s tabulations are deemed unofficial and will remain that way for at least 12 hours with the officially and verified results due to be posted on the County’s web site Tuesday.