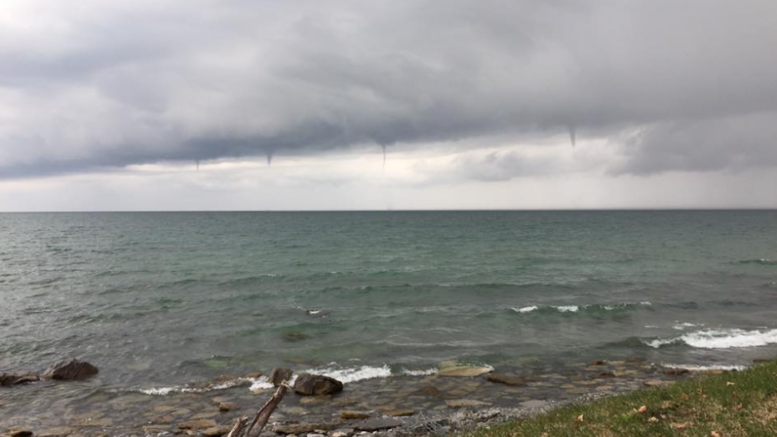 Funnel clouds were evident in the sky over Lake Ontario Tuesday Morning. (Susan Butler-Insley for the Gazette) 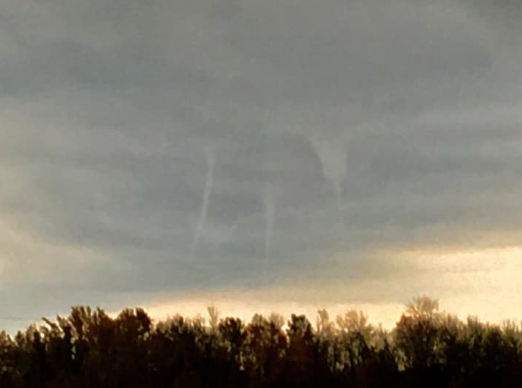 The remnants of three closely clustered funnel clouds over Hillier. (Alex Hunter for the Gazette)

Residents in Hillier, Wellington and the western part of Hallowell wards were able to see and experience a series of six water spouts form over Lake Ontario.

Wade Szilagyi, Director of  the International Centre for Waterspout Research and an international authority for the weather phenomena confirmed to the Gazette Wednesday that observers in Prince Edward County witnessed a rare sight in the western sky.

Szilagyi, a Toronto-based meteorologist, has developed a waterspout forecast algorithm and admitted that conditions yesterday were prime for an outbreak of water spouts over Lake Ontario and Lake Erie.

All told, there were 19 documented waterspouts over Lake Ontario on Tuesday and another seven over Lake Erie.

“That area of Lake Ontario was showing at risk for waterspourt development yesterday but if I had known there were going to be an area of six waterspouts in a row, I certainly would have travelled to Prince Edward County to view them,” Szilagyi said.

Typically, water spouts develop in what Szilagyi called families but it’s rare to see them lined up in a row across the skyline.

I would say that was a rare event.The record Ive heard of is 12 in a row over northern Lake Huron in the late 1980’s.  If you can capture them all in panaormaic shot, that’s a rare picture,” Szilagyi added.

October tends to be the tail end of the water spout high season in Ontario and Szilagyi says they occur more often than the general public might realize however it’s rare that boaters are out on their crafts this time of year to observe them.

Alex Hunter of Casa Dea Winery in western Hillier was in the process of hilling vines to protect the vineyard from the oncoming winter season when the sky started to darken.

“All of a sudden this massive system was almost on top of us so I took a panoramic picture and I turn around and this huge funnel cloud started forming to the south of us,” Hunter told the Gazette. “It wasn’t too far from where we were.”

Farther in the west, three more cyclone clouds formed out over Lake Ontario.

In total, Hunter estimated the funnel clouds spun in the sky for 20 minutes before they retracted back into the cloud formation.

“I guess the temperature stopped it from touching down and they started to go back up into the sky,” Hunter figures. “I don’t think anything actually 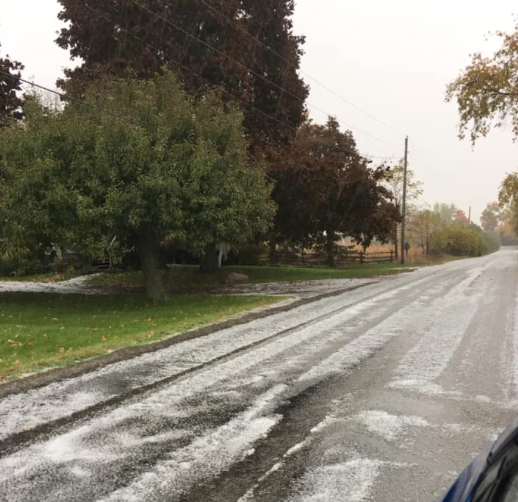 Graupel on Cold Creek road. (Alex Hunter for the Gazette)

touched down in our area.”

The system brought a brief but violent hail storm that was followed by rain.

The majority, or about 75 per cent of waterspouts, are considered the fair-weather variety and Szilagyi believes that Tuesday’s development classifies as that type even though there was lightening, thunder and precipitation following the outbreak.

About 25 per cent of waterspouts come from true tornadic activity that typically originates over land and then proceeds a body of water.

Szilagyi explained the precipitation that followed the waterspouts in western Prince Edward County on Tuesday morning was graupel or what is sometimes called soft hail.

“This is pretty typical of fair-weather waterspouts where cold air descends over the Great Lakes which are still warm enough to create the right conditions,” Szilagyi said. “It’s enough to cause a low top thunderstorm but it’s not considered a severe weather event.”

Waterspouts are mainly a marine hazard and have enough power to flip small craft which is why Environment Canada will issue a waterspout watch in their marine forecast.

On larger ships, waterspouts have been known to knock sailors off decks and, when passing by shorelines, the funnel clouds are powerful enough to knock down trees and swirl debris on the beach.

“It’s things like that on shore that observers need to take notice off. It’s best to watch them at a safe distance,” Szilagyi added.

With the rare formation in the daylight hours over a moderately populated area like Prince Edward County, the waterspout phenomena were a hot topic of discussion making the social media rounds on Tuesday and Szilagyi mentioned he would appreciate submissions and evidence at the ICWR Facebook page located at www.facebook.com/International-Centre-For-Waterspout-Research-346632722024966/

“I’m always looking for information,” Szilagyi said “The more people that capture this phenomana, I’m able to document it and enter it into the database that helps to enhance our forecast method.”