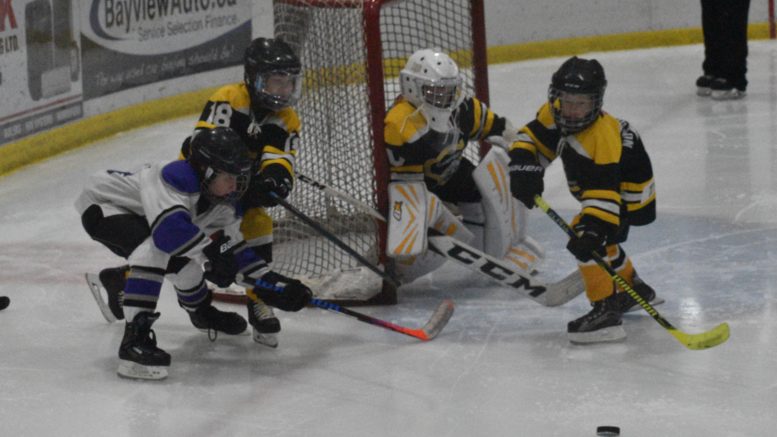 CHARGED UP- (Left) Blake Shephard and his Novice County Farm Centre Kings will be amongst the 44 teams playing in the 9th annual Recharge with Milk Minor Hockey Tournament presented by the Dairy Producers of Prince Edward County here this weekend. (Jason Parks/Gazette Staff) 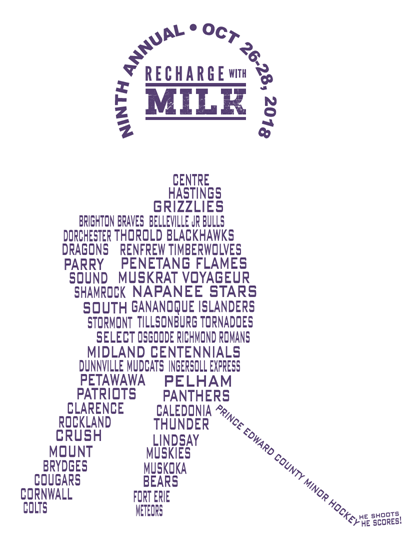 The event is also sponsored by Clean Therapy, Ainley Group and Greer’s Propane

The minor hockey tournament will see an estimated 700 minor hockey players ranging from the novice to midget age ranges play games in Picton, Wellington and neighbouring Deseronto from Friday morning until Sunday afternoon.

“We are extremely excited to welcome all of the teams to Prince Edward County this weekend,” PECMHA President Steve Payne said. “This is the largest fundraiser for PECMHA as it helps to keep registration low for all our levels of hockey so it’s a huge weekend for us.”

Over 700 hockey players and their families from all corners of southern and central Ontario will visit the area this weekend to play hockey and soak up Prince Edward County life while bringing a positive economic push to businesses in the municipality.

While most teams are staying in overnight accommodations in Belleville simply due to volume necessities, Payne was happy to confirm some teams had sourced lodgings in Prince Edward County and would be staying local all weekend long.

While the action will be furious on the ice, the local Kings teams participating will be just as busy off the ice as the clubs take a direct hand in the operation of the tournament.

“Each rep team puts in a full fundraising effort all three days and there will be teams running music at each arena, delivering cartons of chocolate milk to dressing rooms after each game and helping with post game awards presentation,” Payne explained. “This year we have a pancake breakfast for visiting teams at the Picton rink on Saturday morning, there are silent auction items donated from businesses and we have vendor pavilions at Picton and Wellington that have craft and hockey-related wares.”

“There’s a lot more to do for Kings players and parents than play and watch hockey,” Payne said with a laugh.

With no gate fees collected, the event should draw a good number of minor hockey fans and Payne encouraged the public to come and watch some thrilling tournament play.

“It’s a great to have everyone who loves minor hockey to come out and cheer on the players,” the president added.

After the roars of the crowds subside Sunday at the tournament’s close, PECMHA will turn its attention to a brand new program. 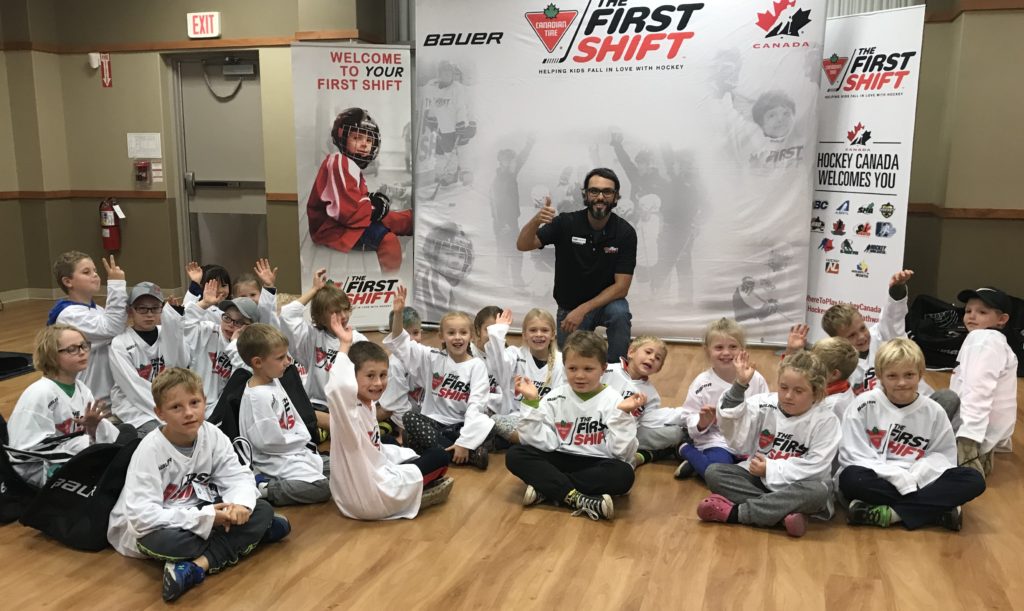 A total of 28 Canadian Tire First Shift program participants will be hitting the ice next weekend for the first time and Payne said the Association was elated to welcome over two dozen new players to minor hockey.

The participants are all previously unregistered players ranging in age from 6-10 years old.

Players and their parents were welcomed to a Bauer fitting event at Lehigh Arena earlier this month and were outfitted in new equipment from skates to helmets and every piece of gear in between.

“It was all first class, Bauer and Canadian Tire did an amazing job and we are so excited to be hosting this program in Prince Edward County,” Payne added.

The President said the program which costs $199 and includes all the equipment for the player to keep and six low volume on-ice sessions to help children develop skills and understanding of the game has been a blessing for parents who might have found it too daunting or expensive to get involved in minor hockey.

“We’ve heard nothing but positive comments from parents and players so far and this is a great way to break into hockey at a low cost and participate in this great game,” Payne said.

Players that complete the program and wish to enrol in PECMHA’s local league will be able to do so at a cost of $50 for the balance of the season.

The Association is hoping to run a second First Shift session later this winter.

For more information, please visit pecmha.com and click on the registration tab followed by the First Shift registration button.