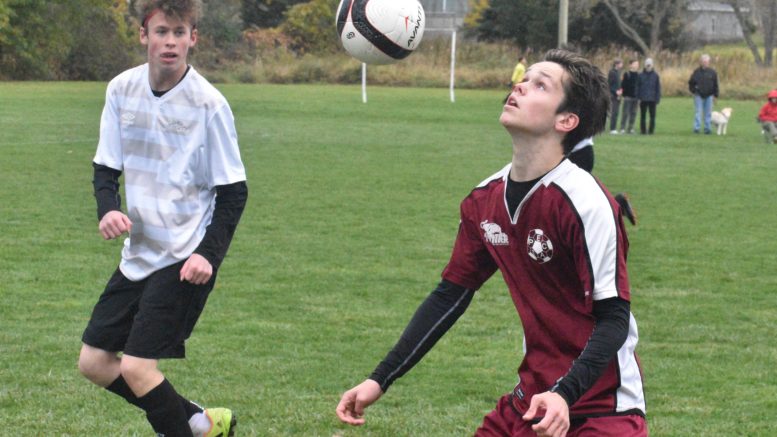 Both PECI Panthers boys soccer teams are marching on in the 2018 Bay of Quinte championships.

The Senior Panthers needed extra time on Tuesday afternoon but were able to eliminate the Centennial Chargers 2-1 in their Bay of Quinte Athletic Conference quarterfinals.

Playing on their home pitch, PECI’s Gabe Goad converted on a penalty kick in the first half to stake the hosts to a 1-0 lead.

The Panthers seemed to be cruising and had a number of promising looks at the Charger net that didn’t materialize. 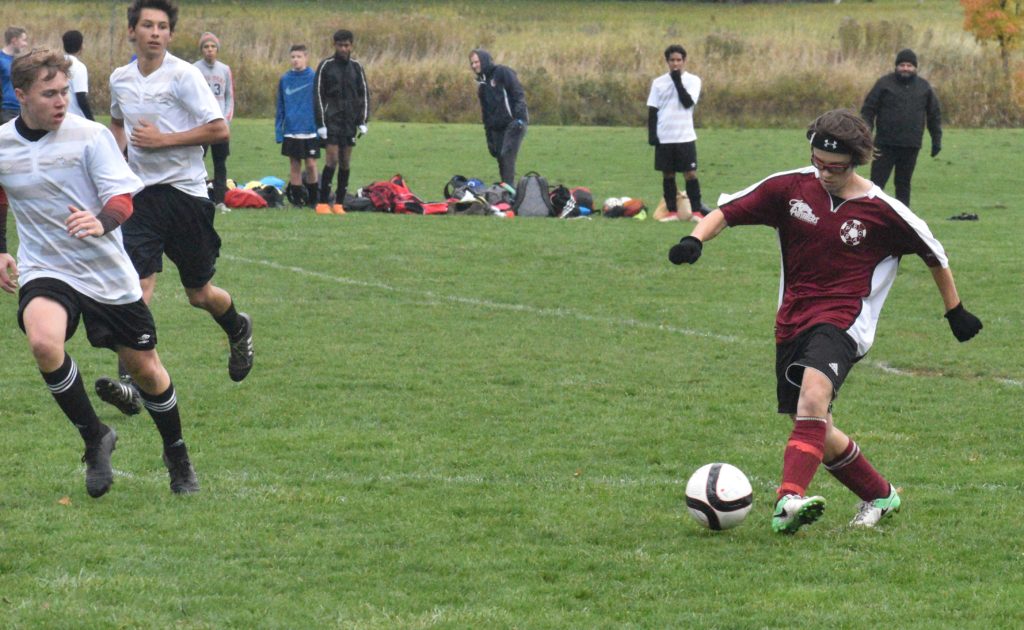 PECI’s Callum McDonald scored the game winner in extra time to lift his club to a 2-1 win. (Jason Parks/Gazette Staff)

Late in the contest a misplay in the PECI end allowed a Charger striker to take the ball to a vacated Panthers net and tie the game at 1-1.

A rough and tumble affair with many free kicks doled out both ways, Callum McDonald was fouled just outside the area midway through the first half of the 10 minute extra time period.

With the game riding on this foot, McDonald was perfection personified, placing a curving effort into the corner of the Centennial cage to push PECI ahead 2-1.

The Panthers were solid the rest of the way as the Chargers’ hoped unravelled.

In junior action, PECI was able to overcome a shortened lineup to down the visiting St. Paul’s Falcons 4-1.

Kacey Cocklin set up two goals and scored another while Wyatt Slade, Oaklie Armstrong and Nolan

The Seniors will travel to Mary Ann Sills Park in Belleville on Thursday to take on the top-seeded Nicholson Collegiate Crusaders on one Bay of Quinte semi-final.

A win over the Crusaders would see PECI play the winner of the East Northumberland-Bayside semi final match.

On the junior side, the Cats travel to East Northumberland on Thursday to tangle with the Blue Dragons in their semi-final matchup.

The Bay of the Quinte soccer championships are slated for Oct. 30 at Mary Ann Sills Park in Belleville.

With the wins, both squads qualified for their respective Central Ontario championship tournaments later next week.